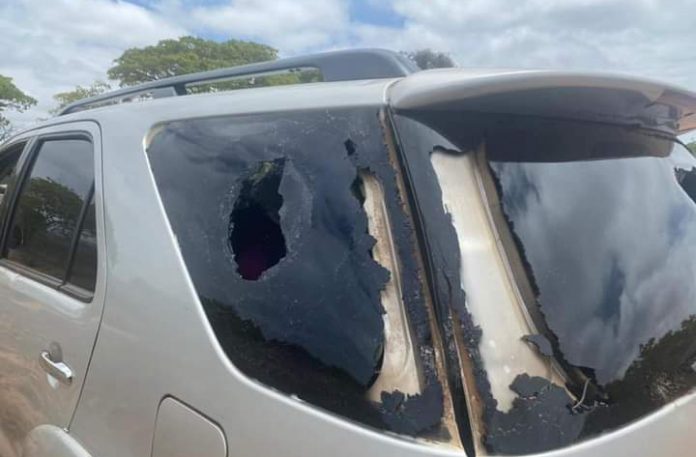 THE MDCs in their variant forms have used antics like fake abductions and demonstrations, among others, to tarnish Harare’s good global standing each time there is an international event or when dignitaries are visiting the country.

The Masvingo and Manicaland roadshows by MDC Alliance leader Nelson Chamisa were no exception.

However, impeccable sources in the MDC Alliance this week told this publication that prior to the infamous roadshows, there were nasty exchanges between Chamisa and his henchmen over the proposed fake assassination in Manicaland and alleged violence by ZANU PF supporters in Masvingo as some top officials within the opposition felt that the ‘strategy’ had outlived its usefulness.

Chamisa is facing stiff resistance from a faction that the sources said is being fronted by the US’ blue-eyed boy, Tendai Biti.

Other officials, said to be buying into the Biti project, include Chamisa’s close ally and business partner Charlton Hwende, with serial flip flopper Job Sikhala in tow.

Sikhala, together with members of the Biti faction, has in recent times confided in some ZANU PF officials on his frustration with Chamisa’s silence and inaction in so far as steering the MDC forward is concerned.

Fearing a possible ouster, Chamisa sprung to action last week, coming onto the scene in Masvingo with fake violence claims against his convoy and posting videos on social media which did give an indication of how ZANU PF supporters stoned his car.

Having failed to convince a skeptical Zimbabwean populace, Chamisa took his antics a step further when he went to Manicaland where he claimed ZANU PF people had ‘shot’ at his car and that he had survived an ‘assassination’ attempt.

He posted several pictures of his car with holes where the ZANU PF bullets were said to have hit.

That prompted techno-savvy Zimbabweans from across the globe to rip through the ruse with sound analysis that exposed the shamelessness.

“According to my superficial investigation, the white borders you see on those bullet holes are caused by energy from the bullet damaging the glass closest to it. The last image has no such white border of damaged glass. My MDC A sources say a hammer and chisel were used,” ZANU PF critic and former Sunday Mail editor Edmund Kudzayi posted on his Twitter account.

Kudzayi has received a barrage of attacks from excitable MDC Alliance people over his expose.

The anti-Chamisa faction has since seized the opportunity to lay bare the lies that Zimbabweans were recently subjected to.

They have been telling everyone who cares to listen that the alleged bullet holes were in fact created from a hammer and chisel that were used by Chamisa’s inept cohorts to make their ‘incredible story’ credible.

The faction members have also indicated that by apportioning blame for his Masvingo and Manicaland ‘misfortunes’, Chamisa has been trying to deflect attention from his increasing woes by pointing accusing fingers at ZANU PF while buying time as he frantically tries to bring the warring parties together.

That is not likely to achieve the desired result for him, the sources said.

But while the ink has dried on the Masvingo and Manicaland fiasco, police have indicated that the MDC is frustrating its investigations as Chamisa and his acolytes are refusing to co-operate with the authorities.

There is nothing new in what Chamisa was trying to do in Masvingo and Manicaland.

Let us go back to July 2004 when former MDC-T leader, the late Morgan Tsvangirai, claimed that he had survived an assassination attempt while addressing his party provincial assembly in Mvurwi.

The MDC claimed the ‘attackers’ arrived in a convoy of eight vehicles and tried to ‘murder’ Tsvangirai.

“They attacked our meeting. This was a clear assassination attempt on our president,” his then spokesperson William Bango said.

“Mr Tsvangirai is unhurt but Mr Tsvangirai also feels and believes that this is the beginning of a violent campaign for next year’s parliamentary election.”

In May 2008, Tsvangirai said he had delayed his return to Zimbabwe from one of his numerous selling-out trips after ‘uncovering’ an assassination attempt.

“Zimbabwe’s opposition leader, Morgan Tsvangirai, has delayed his return home after an assassination plot against him was uncovered, one of his spokesmen said today,” reads in part a May 17 2008 report by The Guardian.

“We have received information from a credible source concerning a planned assassination attempt against President Tsvangirai,” George Sibotshiwe told Reuters.

“Tsvangirai, who has been out of Zimbabwe for more than a month trying to garner international support, was to return this weekend to start campaigning.”

Fast-forward to 2021, the Masvingo and Manicaland drama by the beleaguered Chamisa is not the first time that the MDC and its allies have sought to use fake abductions or what they call State-sponsored violence on so-called pro-democracy activists in the country.

Since coming into office in November 2017, there has been increased activity by anti-Zimbabwe ‘activists’ to tarnish the country’s image through faking abductions.

On January 20 2019, ZCTU president Peter Mutasa handed himself to the police, in the company of his lawyer Alec Muchadehama, who wanted to question him on his role in the violent January 16 2019 violence.

Prior to that, several human rights groups had claimed Mutasa had been abducted by State security agents and went to town with that lie.

Of course, the question would be, how does someone who has been abducted hand himself to the police in the company of his lawyer?

As expected, the abduction claims died a natural death.

That was not all!

As the Zimbabwe-EU formal dialogue began on June 5 2019, ARTUZ president Obert Masaraure claimed he had been abducted by State security agents on the night of June 5 2019.

What is clear is that Masaraure is not a threat to anyone, except to himself of course.

Let us list the activities that the ‘victims’ subjected Zimbabweans to.

On August 13 2019, MDC Youth chairperson for Mufakose, Blessing Kanotunga, claimed he was abducted and assaulted by five armed men as he slept in his home. Another Mufakose MDC activist, Morgan Gumbo claims he was also abducted on the same day

On August 14 2019, Tatenda Mombeyarara (co-ordinator of the Citizens Manifesto) claimed he was abducted from his home in Chitungwiza, assaulted and left for dead in Hatfield.

On August 21 2019, comedian Samantha Kureya was allegedly abducted from her home and tortured by State agents. The armed and masked men reportedly forced their way into the house around 10 pm and assaulted Kureya’s family members as well. (Internet)

August is a critical month on the SADC calendar as leaders meet to deliberate on issues affecting the region.

It is, therefore, not difficult to decipher why there is increased activity by opposition activists during this period.

The opposition activists were not done with us yet as little known Dr Peter Magombeyi rose to prominence in September 2019, claiming he had been abducted by State security agents.

That story failed to find takers, with former MDC senior member Linda Masarira exposing how her former party, together with people from the so-called civil society connive to fake the abductions.

“The big question is, what does the current Government gain by abducting the medical doctor (Magombeyi) at such a time when they are trying to clean up their own image?” she asked.

“Who stands to benefit from these so-called abductions?

The MDC of course!

If they abduct one of their own and put (him/her) in a safe house somewhere, they are going to get donor funds and buttress their narrative that there are gross human rights violations in Zimbabwe and then the US would probably apply more sanctions on Zimbabwe, and then rejoice as they always do.

The MDC should move away from politics of setting a bad narrative about our country and must start pushing for politics of issues.

They want to grab power at all cost and are prepared to smear the country’s image just so that the current (Government) finds it difficult to attract solidarity from other nations and investment from abroad.

It is very bad and shameful.”

The problem with the MDC Alliance is that it never learns.

Let us look at this narrative by the trio of MDC youths Joanna Mamombe, Cecilia Chimbiri and Netsai Marova who clearly violated lockdown regulations by embarking on an unsanctioned gathering in Warren Park, Harare, on May 13 2020.

These ladies proudly posted their images on social media, provoking the authorities by cajoling innocent residents of Warren Park to their gathering.

A few hours later, they emerged in Bindura, some 80 km north of the capital Harare, at Muchapondwa Shopping Centre, telling the world that they had been abducted by State security agents and treating the bemused world to all sorts of childish pranks.

But as is always the case with hopeless ‘plans’, the ladies left several useful clues in their wake.

For instance, while on their way to being abducted in Bindura, the trio found time to buy chicken and chips at a food outlet along Second Street Extension and were duly captured on CCTV.

We will leave it there since the matter is before the courts.