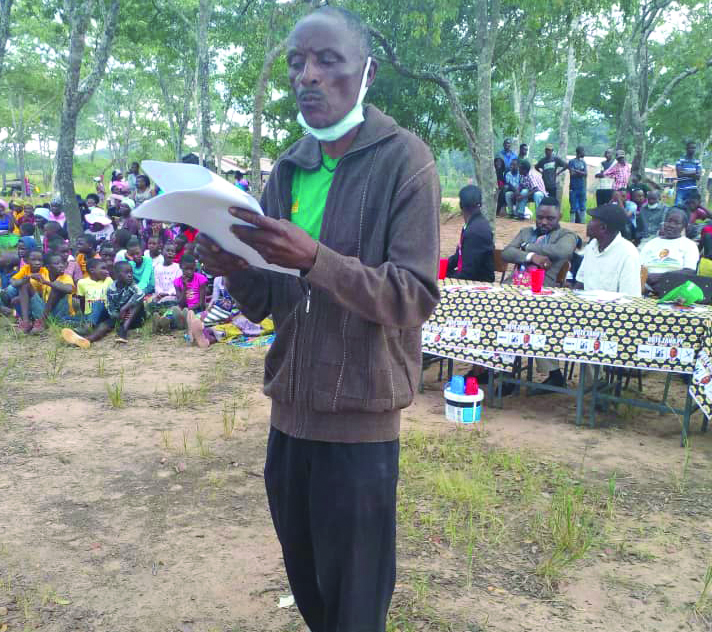 To celebrate, to commiserate, to help one another or just to have plain fun.

It is who we are.

It is in our DNA, to be united, to prioritise togetherness.

That is hunhu/ubuntu, deeply imprinted in our DNA

This year’s independence celebrations revealed just how much Zimbabweans had missed to commune, celebrating uhuru.

It was a day long in coming, reached after bitter struggles and a deep love for the motherland.

Down in Murehwa, in the district of Macheke, grey-haired men and women, little boys and girls, young males and females congregated to celebrate independence.

COVID-19 saw people failing to gather for events as part of measures to curb the spread of the deadly virus.

And, with Government measures having worked bit by bit, people are slowly returning to some semblance of normalcy.

People, for the first-time in two years, since the outbreak of COVID-19, gathered to celebrate uhuru, that beautiful day.

And every participant at the celebrations, be it members of the ruling Party, opposition politicians, neutrals, church people, traditional leaders, all appeared to have brought five words to share with each other: “Listen to Emmerson Dambudzo Mnangagwa.”

And what is it in particular that people should listen to?

Zimbabwe will be, and is being, built, brick-by-brick: “Ilizwe liyakwa ngabanikazi, Nyika inovakwa nevene vayo” President Mnangagwa has said and implored.

No-one, from elsewhere, is coming to build Zimbabwe for Zimbabweans is a message that seems to be steadily dawning on many if confessions, testimonies and promises made by citizens at the independence celebrations are anything to go by.

According to Land Reform and Resettlement Programme beneficiary Tawanda Chenana, who provided five beasts to the independence celebrations in Murehwa’s various districts, it was important to gather and reflect on the progress made thus far in the Second Republic.

“No time is better than our independence celebrations to come together as one people and reflect on the strides and successes we have achieved in the Second Republic despite the challenges and spanners thrown our way by our enemies. To paraphrase one of Africa’s great authors, Chinua Achebe, ‘We gather to celebrate and feast as a people not to save each other from starving. We all have food in our homes. We come together because it is a good thing for people of a nation to do so’,” said Chenana.

Zanu PF vice-chairman of Zawe District, war veteran and farmer, Cde Godwin Marichoro, who read the President’s speech, commended community members for putting aside their differences and come together to celebrate independence.

“We fully appreciate the people who have gathered to celebrate this important day and putting aside our differences. It shows we are a people on a positive trajectory who have heeded the President’s call to be a united people and put Zimbabwe first before all else,” said Cde Marichoro.

“President Mnangagwa is the great advocate who has put the case of Zimbabwe to the world and the destiny of Zimbabwe to Zimbabweans. He is a symbol of words and promises backed by deeds.

“In his post of guide and leader, he has undoubtedly been an unwavering and dedicated great champion of Zimbabwe. He must be fully backed by every patriotic Zimbabwean in this great undertaking to revive the country’s fortunes,” he said.

Participants at the celebrations expressed satisfaction with the leadership style of the Second Republic.

“We are all here in our different political stripes and that is thanks to the leadership style of President Mnangagwa. ED has made it clear that we are all Zimbabweans and no one is greater or more special than the other. We appreciate that, hence every one from every political party is here to celebrate independence. There are issues bigger than our differences that unite us as one people and President Mnangagwa has proved that by embracing every political party that participated in the last general elections,” said one participant who referred to himself as Mhofu.

One youth described President Mnangagwa as a paragon of hardwork.

“We are all here because we are inspired by the work of our President, we know he is in Bulawayo but ED being ED, we won’t be surprised if he showed up here at our celebrations, at the district level, for he is not just a listening President but one who, on almost a daily basis, is with the people at the grassroots. We do not have to wait for rallies or special events to interact with him,” said Panashe Mukarakate.

“We have to find each other and in that regard, the President has led from the front. It is time we fully appreciate that it is our responsibility to build our nation to become the country that we desire. No one is going to build it for us. What we dream of, we must wake up to build ourselves.

Entrepreneur Chenana called on Zimbabweans to take advantage of the conducive environment to get into business.

“Government is preaching a life of not shirking hard work. Our story was rudely and viciously interrupted by the colonialists. But we find ourselves in possession of a fairest portion of the earth with regards to territory, soil fertility and climate. Our great achievements have been accomplished for us and not accomplished by us. We are the inheritors of these fundamental blessings.

“We did not work for their acquirement or establishment of them — they are a legacy bequeathed us by brave and patriotic sons and daughters of the soil. Theirs was a noble task to found and protect. Will our generation make an equal contribution to the Zimbabwe legacy?

“To date, the honours belong to the founding generation. We have merely received and passed along their achievements. We must extend on what has been given us,” he said.

Participants agreed that foreigners would never rule this country again.

“We will not be crushed by a foreign force; rather the danger facing Zimbabwe is among us, some of us. The greatest danger facing ourselves is from within — sellouts; they were a nuisance even during the liberation struggle. However, our foes, within and outside, must know that  the people of Zimbabwe are attached to their country. They will suffer much for its sake and will never think of exchanging it for another.

“To protect our country, we must redouble loyalty to the law, motherland and vigilance. Let every one remember that to violate the law and sellout is to trample on the blood of our ancestors and all the fallen heroes. Reverence for the laws must be breathed to our children, let it be taught in our schools and colleges and preached from the pulpits,” said war veteran Cde Gibson Musanga, aka Cde Santana.