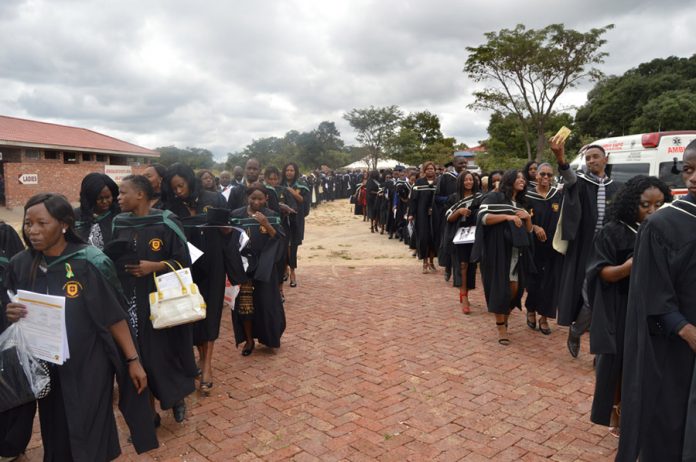 IN 2020, we begin by interrogating the African universities as part of our heritage.

We start by asking some hard questions.

Do African university institutions have the capacity to lead the economic emancipation of Africa through home-grown programmes that do not copy Western content?

Do we have real African universities that research and proffer solutions to African problems or just copycat institutions that mimic Western colonial ‘mother’ country institutions?

Are African universities part of our heritage that we can mobilise to solve our development challenges?

Or are they part of our image-enhancing paraphernalia?

Is university education helping us become equal to Europeans as we acquire those coveted degrees?

Is the purpose of education in Africa perceived as being the same as in Europe and Asia? Functional or decorative, that is the question!

Let us look at Zimbabwe’s challenges to provide a context for possible academic interventions.

The year 2020 finds Zimbabwe standing at the crossroads in terms of its development challenges.

Western-imposed economic sanctions imposed by Britain, Europe and America, as punishment on Zimbabweans for taking back their stolen land, have posed the most serious impediment to economic progress debilitating all sectors of the economy and eroding citizens’ capacity to provide for their families.

Academia must be fully engaged!

The call is on the universities!

Corruption, a malignant cancer feeding off the economic suffering of Zimbabweans, has rapidly spread throughout all areas of the economy, seriously eroding the moral fabric of both public and private sector institutions to deliver quality services to the citizenry as rent-seeking behaviour has become the norm among office-bearers, employees and ordinary citizens.

How do we fight and defeat corruption?

Serious academic practical research and development must be conducted to find ways to tame the monster called corruption!

Where are the universities?

The crazy appetite for US dollars and continued rejection of Zimbabwe’s local currency poses a major threat to the country’s financial stability despite spirited efforts by monetary authorities to stabilise the local currency.

All citizens and businesses big and small continue to quote prices in the foreign currency of US dollars, and to apply the multiple-tire pricing system multiplying the misery of Zimbabweans.

Can academia and economics gurus conjure ways of bringing Zimbabweans back on the ground to earn honest living?

Universities must stand up and be counted!

Gangs of often murderous artisanal miners are on the rampage seeking the yellow metal, committing acts of murder as they ravage and lay waste our once beautiful environment.

Are we slowly descending into a state of lawlessness?

Are there no ways to properly and legally mine for gold?

Surely the universities must have the technologies to deal with these issues?

Or the capacities to find answers through research?

The debilitating drought, now in its second consecutive season has taken its toll, reducing food and water availability for crops, power generation and biological needs of man and beast. Academic institutions must craft and implement strategies to move Zimbabwe out of the woods! Universities where are you? Not missing in action?

Against the above background, Zimbabwe has sought to re-invent its education system to develop a new cadre of citizens with skills and competencies to generate goods and services for the economy through innovation and industrialisation.

The education system up to now continues to produce job-seekers but there are virtually no jobs out there!

The new Education 5.0 now being implemented requires that learners must in addition to being subjected to teaching, research and innovation, be required to actively innovate and create new industries.

Students and their teachers must come up with new ideas and patents that can be developed into new manufacturing industries and other working technologies.

The big question is: Are our Zimbabwean universities ready to take up this leading economic emancipation role to realise Vision 2030?

This article is essential reading for our university academics as they face the challenging task of re-inventing our education system to serve the interests of the Africans.

In researching this topic I came across an article published on-line in World University News. It questions the pedigree of African universities and highlights some of the weaknesses that limit their capacities to spearhead African development. I felt the article is relevant to the topic under discussion here.

Below is the original article published on facebook by Eric Fredua-Kwarteng on 12 December 2019. [https://www.universityworldnews.com/post]

“Over the past few decades, Amartya Sen’s theory of human capability with its focus on expanding or enhancing human capital has become dominant in national development discourse. It challenges orthodox development theories like economic growth, dependency and trade.

Accordingly, African governments have demonstrated an active interest in establishing or allowing private entrepreneurs to set up universities and other higher education institutions.

These efforts have the principal objective of providing the populace with a formal means of acquiring new skills, knowledge, aptitudes and dispositions, expanding or enhancing their capabilities. Human capabilities are considered the real drivers of economic growth, poverty reduction and overall improvement in social well-being.

However, does African universities’ practice of academic imitation constitute a stumbling block to expanding or enhancing students’ capabilities and is academic adaptation a more effective approach?

The imitation occurs in all academic disciplines, including the natural sciences, social sciences, humanities, business and technology. It is not only the pioneering universities established by African former colonial masters that are guilty of academic imitation. Post-colonial African universities are equally guilty.

Academic imitation is guided by the following questions: What are the names of disciplines offered in Western universities? What courses are offered in those disciplines? What textbooks and other learning resources are used in those courses and how could they be obtained?

Such academic imitation destroys human creativity and prospects of producing innovative curricula and pedagogies. It also leads to wholesale importation of academic programmes and courses that are grossly irrelevant to the development, expansion or enhancement of students’ capabilities.

A striking illustration are bachelor and postgraduate degree courses in social work, management and engineering.

More specifically, it is highly unlikely that copycat courses in management will help to produce the entrepreneurs, managers and administrators needed to advance the continent’s economic growth, provide direction to bolster existing industries and create new opportunities.

Most importantly, academic imitation has the tendency to ignore local priorities. This is because imported courses were originally designed without due consideration for African society and the African economy. In other words, copycat degree courses imported from Western universities are not universally applicable.

For instance, courses in bachelor and postgraduate degrees in archaeology and classics (Greek and Roman civilisations) are invariably imported or implanted from Western Europe. Consequently, students find them not only intellectually unstimulating but utterly irrelevant to the development of their capabilities.

In management studies, for example, it is not just that textbooks, theories and frameworks are imported from the West.

The case studies are too, so future African managers, entrepreneurs and leaders are not being prepared to manage African-specific business organisations, practices or problems.

Social work education faces similar problems. Because the discipline is imported in its entirety it does not focus on addressing African contextual problems like public institution corruption, tribalism, the impact of and attitudes to HIV/AIDS, poverty, etc.

Nor does it recognise African traditional institutions such as chieftaincy and African systems of land ownership. The recognition or participation of African chiefs is fundamental to the success of any community development project. It is also not possible in an African context to discuss healthcare without including herbal medicine and shrines.

Most African public universities are preoccupied with achieving international recognition and that is the principal cause of academic imitation.

In fact, it is an age-old source of pride for African public universities to achieve a modicum of international recognition.

Yet it is one of the most intractable colonial mentalities that contributes immensely to African underdevelopment.

The core dictum runs like this: if our universities’ academic programmes, courses and course content is the same as those of universities in the United Kingdom, United States or other Western countries then we are equal to them.

This is an absolute illusion. It suggests that African universities, often touted as a tool for national development, are in actuality a tool for other countries’ development.

Furthermore, what happens to the local is that it is not considered as important as the international in looking at the relevance of African public universities.

Nevertheless, from my perspective the commonsensical expectation is that local priorities should influence the main purposes of African public universities, not international ones.

If African society and economy are not benefiting from their own universities, that suggests that the universities are irrelevant.

One critical conclusion is that African public university courses, their objectives, contents and pedagogies should all be designed with the African society and economy as their fundamental bases.

And the effectiveness of an African university should be assessed based solely on its contribution to African society and the economy.

The way forward for African universities is to apply the principle of adaptation, which is based on taking a concept and making it one’s own through creative modification or tweaking. It could be termed indigenising the concept.

Its primary goal is to develop course content and learning materials that are unique and relevant to the continent.

In this way one could study the course offerings of other universities to gain valuable insights without having the purpose of imitating them.

The adaptation approach is guided by the following set of questions: What need in African society do we want to fulfil?

What academic programmes and corresponding courses could provide students with the experiences they need for developing skills, knowledge and attitudes that could be applied to satisfy those societal needs?

How could students attending these courses be continuously assessed to ensure that they are developing those skills, knowledge and attitudes considered necessary for expanding their capabilities?

It is not simply a matter of copying or mimicking Western paradigms.”