THOSE who do not learn from history are destined to repeat their mistakes.

Not only have his people been reduced to beggars, refugees and become a sorry lot, but the economy has all but crumbled.

It will take Ukraine many years to recover — why?

Because their President was too weak or so misinformed to say ‘no’ to the West’s foreign policies, and more interested in pleasing them than protecting his own people.

Here, in Zimbabwe, we have our own version of Ukraine’s actor and comedian in the mould of Citizens Coalition for Change (CCC) president Nelson Chamisa whose youthful naivety threatens to derail the Zimbabwe’s development trajectory.

Last week, the country had a surprise visitor, a Professor Stephen Chan.

After meeting Chamisa, Chan unwittingly revealed that he had come on a mission to get Chamisa to announce a shadow government.

Professor Chan only confirmed what we, at The Patriot, have always written of the opposition, that they are nothing but mere puppets working to please their masters.

“Certainly the West needs to know who is in the front bench of what should be projected as a government –in- waiting. With whom each specialist portfolio, e.g., health, education, justice, agriculture, industry, finance, foreign affairs and defence will the West be dealing?” wrote Professor Chan on his Twitter handle.

Chamisa, for the string-puppet he is, would, a few days later, oblige and go on to write to Parliament Speaker Jacob Mudenda announcing a shadow Cabinet with a lot of interesting names on it.

Of course, Professor Chan was pleased with this show of loyalty and, on July 15, went on Twitter to pat his puppet on the back.

“I am very happy he has done this, in some of my media interviews whilst in Zimbabwe, I stressed the need for the West to know with whom it would be dealing, portfolio by portfolio, in the event of a 2023 CCC electoral victory.”

The truth has been revealed and the country is stunned by such an expose.

Chamisa, realising he had exposed himself and CCC officials, immediately went on the defensive, going out of his way to try and do some damage control.

He claimed he had announced secretaries to shadow Government Ministries in Parliament and were, therefore, not a shadow Cabinet.

But Professor Chan was having none of it and urged Chamisa to, “…take the plunge and say it.

The outside world wants some certainty about such things.”

The West has been trying to effect regime change in Zimbabwe and has been using those with no respect for their country’s history and struggles to try and do so.

For them, a new Zimbabwe is about doing away with the liberation struggle and all it stands for.

Professor Chan is a professor of World Politics at the University of London’s School of Oriental and African Studies and key advisor to the British Government.

He is the opposition’s long-time strategist and believes he knows the answers to the problems in Africa, Zimbabwe to be exact.

In a book he co-authored with Julia Gallagher, published in 2017, he revealed why the then MDC would find it difficult to win the elections.

He said: “…the opposition offers nothing tangible or ideal. It did not have loyal members that were sold to the cause…. ZANU-PF has got supporters and the opposition has got sympathisers.

Supporters are loyal — even if things are going wrong they will continue to support. They contribute to the party. They believe in the cause. And the Movement for Democratic Change (MDC) has sympathisers — disgruntled ZANU PF people, with scores to settle, opportunists. There is no ideological connection between the sympathisers and the MDC. They are more fluid. You can’t count on them. They can abandon the ship.”

He could not have been more accurate.

Even today those words ring true.

The reason CCC will fail to win the 2023 elections is the absence of an ideology to guide the party as well as true supporters to back their cause.

CCC lacks vision; their only objective is to do away with ZANU PF at the behest of their masters, with no strategies of their own.

What is scaring the opposition even more is the massive strides made by the Second Republic in rebuilding the country, especially when it comes to the country’s infrastructural development.

Former US Ambassador to Zimbabwe Christopher Dell’s leaked report under WikiLeaks discouraged US continued support of the opposition saying it was, “… a party incapable of governing, a party which would need ‘massive hand-holding’ by the West if ever it got into power.”

He argued the opposition’s ideological paucity had failed to attract genuine politicians with leadership capacity.

Even their handlers know they cannot depend on these puppets as has been proven time-and-time again through the years.

In 2019, the US publicly supported Venezuelan opposition leader Juan Guaido’s call for the military to back his efforts to oust socialist President Nicolas Maduro, saying his presidency was illegitimate.

On July 12, in an interview with CNN’s John Bolton, a former Ambassador to the UN and former White House national security advisor admitted to helping plan attempted coups in foreign countries.

He confessed to planning the unsuccessful coup in Venezuela which, “…turned out not to be successful. I saw what it took for an opposition to try and overturn an illegally elected president and they failed.”

In Zimbabwe they will continue to fail too.

Already, CCC is crying foul even before the elections date has been set; they are aware their chances of winning are very slim.

So now their masters have decided to push them into going all out via the militia route.

That is why Professor Chan is jumping the gun and encouraging the naming of a shadow Cabinet.

CCC, at the behest of the West, has set up a paramilitary wing with command centres around the Southern African region.

In and operation code-named ‘Fourth Chimurenga’, these have been put in place in order to create discord before and after the 2023 harmonised elections.

The Patriot is reliably informed that one of their bases is in the Copperbelt Province of Zambia, while the other is in Muninge, Mozambique.

We are also aware that there are so-called various civil society organisations pushing for and willing to fund protests to take place at any moment in the country.

This will, of course, not happen as the Government of Zimbabwe does not, and will not tolerate such mischief from a few bad apples in the country.

The West may try and prey on the weak-minded but Zimbabweans will never sell out their souls to the devil. 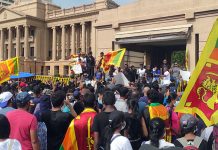 Sri Lanka is not Zimbabwe