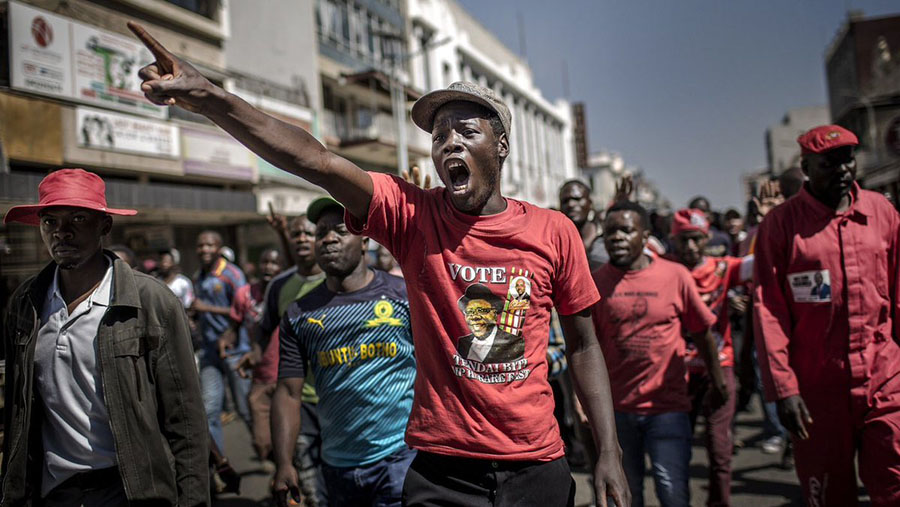 IT has come to The Patriot’s attention that Peter Mutasa of Crisis in Zimbabwe Coalition (CiZC) is planning to form a so-called Labour Forum.

This will be parallel to the infamous Zimbabwe Congress of Trade Unions (ZCTU), a body that has always purported to represent the ‘interests’ of workers in the country.

Their intention is to stage demos using the ZCTU provincial structures Mutasa formed during his days as ZCTU secretary-general.

These are provincial labour committees that purport to co-ordinate labour issues at provincial level composed of various trade unions affiliated to ZCTU.

Mutasa has, time-and-again, used ZCTU to settle cheap political scores using workers under its umbrella to push their anti-Government agenda.

They have participated in efforts to topple the ruling Party and Government through unconventional means, causing so much chaos in their attempts to destabilise peace and stability in the country.

The ZCTU, through its then president, Mutasa, orchestrated the January 14-16 2019 violence that resulted in looting of shops and burning of properties.

From February 26 to 28 in 1999, the ZCTU held what it called a National Working People’s Convention to form a political party and on September 11 1999, the MDC (now CCC) was formed.

Over the years, they have staged countrywide demonstrations that have failed dismally.

They worked with the whites to confront the Government.

Their target was, and still is, the Government.

Funding for the intended demonstrations is coming from USAID but will be deposited in a VERITAS bank account because CiZC doesn’t have a proper accounting system.

The project was approved by USAID Washington DC Headquarters.

CiZC has previously been mired in looting storms which have led to a number of NGOs pulling out of the umbrella body.

VERITAS is a parliamentary and civic rights watchdog.

It is part of the Western-funded NGOs whose agenda is to create instability in the country by undermining the relevant leadership.

They come under the guise of human rights, good governance and democracy — wolves dressed in sheep’s clothing to be exact.

The demonstrations are meant to boost the popularity of opposition leader Nelson Chamisa who will be contesting in the country’s harmonised elections next year.

Named among the players in the latest plans for demonstrations are Obert Masaraure, Robson Chere, Blessing Vava and Itai Zimunya.

Mutasa was elected as the chairperson of CiZC on January 12 2022.

He was ousted from his position as ZCTU president last year by Florence Taruvinga.

In December 2021, he was dragged to the Zimbabwe Anti-Corruption Commission (ZACC) for prejudicing ZCTU of a lot of money when he was at the helm of the organisation.

Zimunya leads the Zimbabwe Constitutional Movement, a joint venture between CiZC and VERITAS.

He is a former ZINASU leader.

When ZCTU transformed into MDC, ZINASU was a key player and under the leadership of Zimunya and Philip Pasirayi, staged student demonstrations that led to the death of Bachelor of Science student Batanai Hadzizi.

Vava served as the national spokesperson for ZINASU in 2008-2010.

In 2020, he was appointed national director for CiZC, taking over from Thulani Mswelanto.

Currently, Masaraure, ARTUZ president and CiZC spokesperson, and Mutasa are not seeing eye to eye because of differences in the modus operandi and on how CiZC programmes must be prosecuted.

Masarure currently has a murder case hovering over him yet Mutasa wants to front him at CiZC as spokesperson, something Masaraure is refusing to do.

Last month, CiZC vowed to proceed with unannounced future protests after having their violent attempts at anarchy thwarted continuously.

The organisation accused the police of frustrating their efforts to engage State institutions when planning to conduct peaceful protests in the future:

“So, we are seeing a well-co-ordinated approach by State institutions to stifle and suspend constitutional rights and this is quite sad.

What this will mean is, we are going to be forced to go into the streets without notifying the police and we are also going to disengage discussions with the courts and use civil disobedience in a non-violent manner to disregard unjust laws.”

CiZC, like the ZCTU, has been on the front-lines of violent demonstrations that have rocked the country in the past.

They stormed schools and beat up teachers, vandalised clinics and supermarkets and also caused the death of one of the police officers who was simply trying to enforce law and order.

Uncle Sam, earlier this year, summoned university drop out, ARTUZ leader Masaraure, and ousted ZCTU leader and now CiZC president Mutasa and coached them on how to further destabilise the country. They met with US Charge d’ Affaires Thomas Hastings.

They tried, without success, to cajole teachers and nurses to embark on strikes and once again have been failing dismally.

They even teamed up with Jacob Ngarivhume to bring the economy to its knees through what they dubbed #shutdownzimbabwe, which was slated for May 9 of this year and, again, it was a monumental flop.

One would think it is a lesson they should have learnt by now, but just recently, Gift Ostallos Siziba, Amos Chibaya and Mokoleli Daniel, thanks to their sponsors, went scurrying to the UN General Assembly with the intention of holding demonstrations against President Emmerson Mnangagwa.

The demonstrations had been scheduled for New York, but it turned into a circus of clowns embarrassing themselves at the biggest stage of all.

It was a huge flop.

Many of the expected activists did not show up.

Why demonstrations no longer work in Zimbabwe

The majority of people in the country are informal traders. The informal sector contributes around 20 percent of the country’s GDP or a total value added US$2 billion. According to a ZimStats survey, of the six million, only 11 percent of Zimbabweans are in formal employment.

About 84 percent are in informal employment; the largest group being in the wholesale and retail sector, repair of motor vehicles and motor cycles, thereby constituting 52 percent, followed by other services and manufacturing at 14 percent each.

With so many people in the informal sector, demonstrations will not work.

For many people in the country, the ZCTU, CiZC and their affiliated unions are ultimately irrelevant and USAID should know better than to channel funds into a lost cause.

It is a money-making project for conmen who continue to live large, thanks to the gullibility of their sponsors?

At the same time, those who intend to cause anarchy in the country should know their plans are well-known and will be resisted.