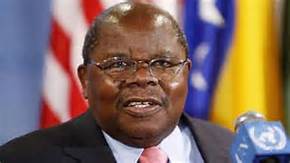 THE morning of Friday 24 July 2020 brought with it sad news that Tanzanian former President Benjamin William Mkapa aged 81 had passed on.

He was the country’s third president after independence from Britain in 1962.

Ruling the East African country for two terms from 1995 to 2005, he will be remembered for his impressive record as an economic architect and his art in building state institutions.

Tanzanian President John Magufuli has declared seven days of mourning, during which the national flag will be hoisted at half-mast countrywide.

Born in 1938 in Ndanda in south-eastern Tanzania, the last of four children, Benjamin Mkapa attended local schools before completing a University degree at Makerere in Uganda.

Leaving Makerere in the early 1960s, he worked both in local administration and foreign service, furthered his studies in US and wound up in journalism, editing some national papers.

By the 1970s, Mkapa was already a Julius Nyerere protégé before taking over as Managing Editor of the Daily News, the establishment mouthpiece.

In July of 1974 he was appointed Secretary of Press for President Julius Nyerere and in July of 1976 he launched the Tanzana News Agency (Shihata).

Several diplomatic portfolios followed until he finally joined Cabinet, eventually taking the high profile post of foreign minister; colleagues and visitors recall the friendly and unassuming hospitality of Benjamin and his wife Anna.

His ability and popularity led to leadership and in 1995 he took 62 percent of the vote in Tanzania’s first multiparty presidential elections.

For the reform-minded Mkapa, his new office was to be a tool to bring forces of change to his country, one of the poorest in the world, but also one that The Economist cited as ‘a model of stability for the past 30 years’.

Identified harbinger of change “Mwalimu was an extraordinary man, he was a God-given gift to us,” wrote Mkapa with great respect in his memoir My Life, My Purpose: A Tanzanian President Remembers launched in December last year.

“Mwalimu Julius Nyerere was undoubtedly the greatest influence on my

personal growth as a leader and on my career,” Mkapa said of his mentor, adding that “he was my teacher in every sense”.

In his speech at the funeral of President Nyerere, Mkapa also used the name familiar to his people, ‘Mwalimu’ (teacher).

In 1992, Chama ChaMapinduzi (CCM), which means a revolutionary party, began transitioning from a socialist orientation to multiparty democracy.

Though Nyerere was retired, he had enough clout to hand-pick Mkapa — an active CCM member much of his adult life, including serving on the party’s 20-member central committee since 1987 — for the presidential candidacy and to actively campaign for him a couple years later.

When Mkapa assumed the presidency on November 23, 1995, he inherited a country whose economy was in shambles.

He instituted a raft of economic reforms, a number of them not popular within the country and beyond, earning the journalist-cum-president the nickname Mzee Mkapa, drawn from Kiswahili phrase ‘anakula ukapa’ meaning ‘you have nothing’.

Interestingly, he also became known as ‘Mr Clean’ for his relentless efforts to rid the country of the vice called corruption.

For his efforts, he left office a proud man, having overseen government revenue rising from just over US$612 000 when he became president in 1995 to about US$1,8 million when he left office in December 2005.

And today, as Tanzanians reflect on Mkapa’s journey they call him ‘Bwana-mkubwa’ which means ‘very important man’ – ‘the biggest’.

I have no doubt, he would dismiss such flattery in the same way that his mentor and role model, Julius Nyerere, would have done.

But Mkapa did more than simply follow the path created by that great statesman.

He earned recognition for his selfless service to Tanzania and his advocacy for the poor of the world.

Benjamin Mkapa was no longer in the great man’s shadow.

According to The New Humanitarian, just at the start of his administration, Mkapa engaged economic recovery programmes, robust macroeconomic policies and structural reforms, including the privatisation policy initiated by his predecessor, Ali Hassan Mwinyi.

The New Humanitarian reported that by 2005, foreign reserves had increased to an equivalent of eight months of imports, and revenue collections stood at about US$140 million a month, more than triple the amount for 1995-1996.

Then later on July 14 2005, The New Humanitarian report showed that “the late Mkapa told parliament that his administration had achieved macroeconomic fundamentals, which in turn had boosted investor confidence in the country and the government, a far cry from the situation when he was elected president.”

In terms of settling debts, Mkapa’s tight policies made the World Bank and the International Monetary Fund (IMF) November 2001 cancel over US$2 billion in debt.

His contribution to Tanzania’s telecommunications legacy is noticed, as Tanzania stands to be Africa’s fast-growing cellular phone market, Mkapa seeded the efforts as he liberalised the telecommunication sector.

The financial sector also gained momentum as he managed to propel the growth of the banking sector. As of now at least 40 commercial banks, scores of bureaux de change and a healthy chain of microfinancing NGO’s have emerged.

Mkapa was also an initiator of crucial regulatory and management bodies such as the tax, water and sewage authority, communications regulator, energy and water regulator, transport and also poverty alleviation strategies.

Also as the third president, he made Tanzania become a keen actor in pursuing and forging peace initiatives across conflicting areas in Burundi, Democratic Republic of Congo and Rwanda.

However, The Humanitarian argues that “Mkapa has also been instrumental in cementing regional economic integration through the East African Community and Southern African Development Community (SADC).

East Africa set its course towards a common market after the region started implementing Customs Union Protocol in January 2005, and Tanzania has continued to play a key role in the economic integration among SADC member countries.”

Mkapa will be remembered for his unwavering passion towards cementing good governance, equity, justice and poverty elimination regionally and

In 2015, a retired Mkapa returned the late Nyerere’s favour to Tanzania by identifying John Pombe Magufuli as Tanzania’s new harbinger of change.