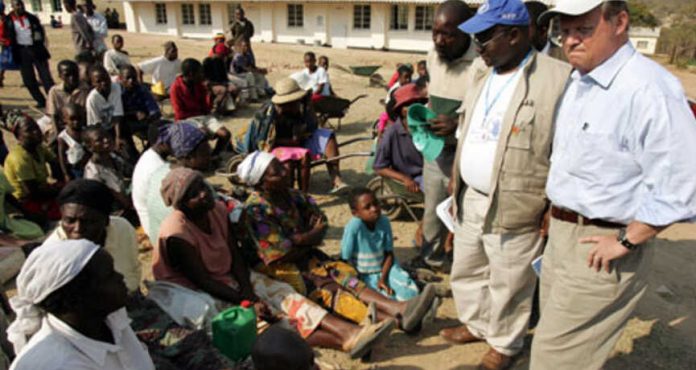 MOST errant NGOs in Zimbabwe operating outside their mandates have been dodging compliance with Government regulations by registering their organisations in the form of Trusts, The Patriot can exclusively reveal.

According to investigations carried out by this paper, the last decade has witnessed a sudden surge in the number of NGOs defined as Trusts in Zimbabwe.

Under the guise of humanitarian work, development and governance, NGOs are meddling in political processes in Zimbabwe to effect regime change as they push the nefarious interests of some nations in the West.

There are over 3 500 NGOs working in Zimbabwe.

NGOs have been registering as Trusts through the Registrar of Deeds under the Deeds Registries Act.

Trusts have been used as a means to avoid operational and monitoring policy from Government.

In addition, a Trust form has also been used for registering organisations that have faced difficulties in registering under the PVO Act.

PVOs are registered under the Private and Voluntary Organisations Act through the Department of Social Welfare under the Ministry of Labour and Social Services.

These are mandated under the law to conduct their work within their objectives or constitution, and under Section 21 of the Act, members of the PVO may be suspended if they fail to comply.

Under Section 20 of the PVO Act, Government is authorised to send inspectors at any time to examine the accounts and any documents of any PVO.

Once a notice has been delivered to the PVO, the PVO is expected to comply by providing all required information.

The documents that are effectively seized by virtue of the notice can be kept for a reasonable period.

However, all these processes can be avoided if the organisation is registered in the form of a Trust.

Trust registration requires the services of a registered Notary Public unlike with registering an NGO under the PVO Act.

A Notary Public is required for the drafting and preparing of the Trust deed and other necessary documentation.

In addition, the Notary Public will register the deed with the Registrar of deeds in the Deeds office.

Trusts have unlimited objectives and are intended to benefit an identifiable constituency.

Thus, this makes it easy for NGOs to go outside their scope.

Charitable trusts have proved to be a headache for the Government and there have been several instances where the Government has tried to place these types of NGOs under the ambit of the PVO Act.

The argument being that any Trust falling within the definition of a PVO is obliged to register as a PVO.

According to a paper by Roselyn Mhlanga of Kanokanga and Partners law firm, the Ministry of Justice and the Ministry of Labour in 2009 issued a “Joint Memorandum : Amendment to the PVO Act and the Deeds Registries Act”.

The Memo proposed that Trusts, which are registered with the Deeds Registry, and fall within the definition of a PVO, be expressly included within the embrace of the PVO Act and therefore be obliged to register as a PVO before commencing activities.

The process was dismissed as being a burdensome two-tiered registration process.

Currently, Section 2 of the PVO Act excludes Trusts in its definition of what constitutes a PVO.

Nevertheless, the hide and seek game between Government and NGOs is over as all NGOs’ operations have been directed to be cleared by Provincial Development Coordinators.

The directive to get clearance from Provincial Development Coordinators and also submit work plans and information on planned workshops is effective from July 9.

In a letter dated June 30 2021 addressed to all NGOs, private voluntary organisations (PVOs), faith-based organisations and civil society organisations, Harare Metropolitan Province Development Coordinator Tafadzwa Muguti said operations of such organisations must always be within the confines of the law.

“It has been noted with a high degree of concern that many organisations operating in Harare Metropolitan Province, in particular NGOs, have been straying from mandates stated in their respective Memorandum of Understanding (MoUs). Suffice to say that such behaviour represents a breach of Memorandum of Agreement and should not be allowed to manifest further,” reads the letter.

“In view of the foregoing, all non-governmental organisations (NGOs) are hereby directed that operations and clearance of NGOs are now domiciled with the Provincial Development Coordinator.

“Further to that, all NGOs are directed to submit work plans for the year 2021 to the office of the Provincial Development Coordinator as well as information relating to workshops, commissioning of projects, works being undertaken in Harare Metropolitan Province, monthly reports, and other pertinent information as regards their operations by July 9, 2021.”

‘We won’t obey the directive’

Taking into consideration that this new directive will unmask many NGOs who have been covering up their activities in communities, the civil society is challenging the new directive.

This week NGO umbrella bodies and pressure groups had a stampede of conferences and consultations to denounce the new directive.

National Association of Non-Governmental Organisation (NANGO), the umbrella and coordination body of NGOs in Zimbabwe, at short notice had a meeting this Tuesday which was attended by over 165 organisations.

The meeting which ran under the topic ‘Civil Society Organisations (CSOs) Shrinking Space Conversation’ sought to engage CSOs and Community-Based Organisations on the way forward in protecting and promoting the CSOs operating environment.

They consider the new directive a threat to operations of NGOs in Zimbabwe.

“NANGO takes note of Memorandums that are being issued by local government structures such as Masvingo, Harare, Manicaland, Matabeleland North,” reads the communique from NANGO.

“…NANGO and broader Civil Society Organisations notes with great concern the sentiments and issuance of administrative procedures by government departments and politicians targeted at NGOs.

“The current development if not managed well may have a huge implication on the welfare of the vulnerable communities and reversal of the gains in health, resilience, education, social protection and effective participation of the public in democratic processes.

Therefore, we urge the government and political parties to be more hospitable to NGOs as they are working towards the economic, social, civil and governance development of our beloved country, towards Zimbabwe We Want.”

Remember the project, The Zimbabwe We Want was coined in 2006 by faith-based organisations and took the unprecedented step of pushing for the ouster of ZANU PF from power by aiding the West and the opposition’s regime change agenda project.

And they were well-financed by Western governments working with them to pursue the anti-Zimbabwe project.

Since then, the Zimbabwe We Want has become the hallmark of the regime change agenda.

According to the pressure group, Government’s move is totally unacceptable.

“There is no legal or policy provision within the current frameworks which oblige NGOs to register with the PDC offices,” reads the position paper from CIASA.

“Your office of PDC is non-existent in the statutes,” the civic groups said in a letter dated July 7.

“In the event that you believe you have the same functions as provincial administrators in terms of the Act, a reading of section 10 of this Act clearly points towards the fact that your powers are confined to the co-ordination of the various ministries and organs of central government.

Your office, therefore, has no mandate to regulate the operations and clearances of NGO activities, more specifically because your functions are restricted to governmental development and your office has no executive functions.”

Previous issues of The Patriot have exposed how many of these civil society groups and NGOs are mere appendages of the opposition.

A 2003 US Institute for Peace report titled, ‘Zimbabwe and the Prospects for a Non-Violent Political Change’ reads in part: “In the late 1990s, civic coalitions in Zimbabwe began to emerge, build consensus and gain collective strength around the need for non-violent political change…. This newer focus of NGOs on governance, advocacy and political change departed significantly from the earlier civic orientation. This change is at the heart of concerns by Government and some social critics that NGOs are involved in politics and are too closely aligned with and compromised by Western donor interests.”

Zimbabwe is working on amending the PVO Act [Chapter 17:05] ensure that it complies with the requirements of the Financial Action Task Force for combating money laundering and financing of terrorism.

Precisely, the amendment seeks to ensure that PVOs in Zimbabwe are not used as conduits for money laundering and funding terrorist activities by individuals and organisations.

Last year in November, President Emmerson Mnangagwa warned misbehaving NGOs and disclosed that Government would craft a law to make sure they operated within their mandates and in-sync with government policies.

In a virtual State of the Nation Address, President Mnangagwa said Parliament would soon consider the Private Voluntary Organisation Amendment Bill to revamp the administration of NGOs and private voluntary organisations to correct the current anomalies.

“The conduct of some NGOs and PVOs who operate outside their mandates and out of sync with the Government’s humanitarian priority programmes, remain a cause for concern,” President Mnangagwa said.

“This august House will, therefore, consider the Private Voluntary Organisations Amendment Bill to revamp the administration of NGOs and PVOs and correct the current anomalies.”

Since the Second Republic came into power in 2018, there have been collusions by NGOs to destabilise the country as many are meddling in politics as Western stooges.

And it seems, their dirty work is expected to gain momentum ahead of the 2023 polls.