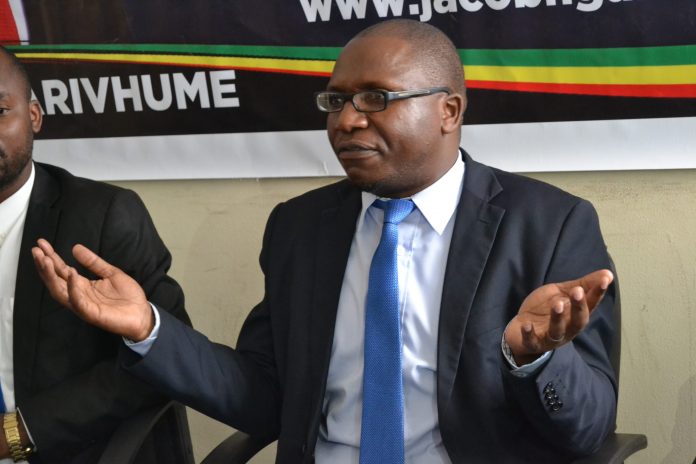 THE key takeaway from the palpable anger and fury that was exhibited by the US, the EU and some Western countries over the arrest of ‘journalist’ Hopewell Chin’ono and organiser of the July 31 2020 violent demonstrations Jacob Ngarivhume on Monday, was that it unmasked them as the faces behind the proposed anarchy in Zimbabwe and with it, the role that the MDC has been assigned on that fateful day.

Western countries have been working with the likes of Chin’ono, Ngarivhume and other like-minded regime change agents to unseat the Government under the guise of ‘fighting against corruption’.

Their exposure on the Chin’ono and Ngarivhume issue once again brings to the spotlight the necessity of re-engaging them, given the open hostility they have shown in recent times.

While attention was seemingly being equally given to the duo, it is the swiftness in babysitting Chin’ono, particularly by the US through the barrage of tweets and statements, that let the cat out of the bag.

Chin’ono is their man and they are without doubt his handlers.

Poor Ngarivhume was abandoned, left alone to come to grips with the chaos that has rocked the planned violent demonstrations organisers’ camp over the strategy and thrust of the July 31 2020 intended chaos.

Ngarivhume and members of his ‘organising committee’ have been at each other’s throats over the plan of action on the day of the demonstrations.

Information gathered by The Patriot shows that the MDC has been planning to whip up emotions by using the demonstrations to ‘commemorate’ what they say is the second anniversary of their heroes who died during the August 1 2018 disturbances.

On that day, MDC’s marauding youths went on a property destruction spree as they marched towards the ZEC Command Centre at the Rainbow Towers Hotel, where they wanted to burn election result papers.

This was after it had started to emerge that their presidential candidate, Nelson Chamisa, was headed for an embarrassing defeat.

The violence was culled by the swift intervention of the country’s security forces.

The elections were won by President Emmerson Mnangagwa, who then set up a Commission of Inquiry to deal with the matter.

But it is the arrest of Chin’ono and Ngarivhume that has further enhanced the West’s resolve to effect regime change in the country through providing funding and strategies, including using social media, to create another Arab Spring in Zimbabwe.

While Ngarivhume and his partners have been claiming that they will be demonstrating against corruption in the country, the reality is they intend to go after President Mnangagwa and the ruling ZANU PF.

They are being coached to flood the streets both in the CBD and high density suburbs with the aim of causing damage both to property and ordinary citizens.

Boulders, catapults and pepper sprays are being mobilised for the youths to use against security forces, strategic buildings and targeted individuals.

There are fears that some named service stations are being targeted as well.

The MDC on the other hand, has other plans for the day.

Impeccable sources revealed this week that the proposed plan by the MDC to highjack Ngarivhume’s demonstration through smuggling in the ‘commemorations’ had angered other partners, who have threatened to pull out of the July 31 2020 planned anarchy.

While the MDC party has not come out in the open on its role in the demonstrations, it has since emerged that it was recently jolted to action and has been ‘secretly’ mobilising its people on the ground after the US is said to have come up with funding for the violence.

It is our understanding their youths have been promised US$20 each for participating in the demonstrations.

Another impeccable source revealed that the US had released a staggering US$ 300 000 as funding for the demonstrations.

It has also emerged that the US’ anger was premised on their support for Chin’ono, who is alleged to have been receiving huge sums of money to incite the masses to rebel against the Government.

Chin’ono has an office in Milton Park,

Harare, that is supported and funded by the US.

The US-sponsored ‘journalist’ is being charged with incitement to participate in public violence.

ZRP  national spokesperson Assistant Commissioner Paul Nyathi confirmed that the duo had been arrested despite earlier assertions by Chin’ono’s lawyer, Beatrice Mtetwa, that her client had been ‘abducted’ by what she claimed to be unknown people.

“The Zimbabwe Republic Police confirms that Jacob Ngarivhume of Transform Zimbabwe and Hopewell Chin’ono have been arrested in connection with allegations of contravening section 187(1)(a) as read with section 37(1)(a)(i) of the Criminal Law (Codification and Reform) Act, Chapter 9:23, ‘incitement to participate in public violence’,” the statement read in part.

“The duo will appear in court soon and are currently in police custody.”

Such is the desperation to grain traction that the organisers have also been told to cause confusion in the security sector by creating false reports that they are being supported by the military.

But in a statement last week, Zimbabwe Defence Forces (ZDF) Commander General Phillip Valerio Sibanda dismissed as unfounded claims that the military was working with the organisers of the demonstrations.

“The ZDF notes with concern the concerted efforts by some sections of the private media, which are bent on dragging the ZDF into their political scheming,” said General Sibanda.

“This is evidenced by an online news item titled, ‘Military backing demo’ published by Transform Zimbabwe on Chimurenga Radio on 13 July 2020. On the same day there was another publication by ZimEye in their article, ‘The army has been used settle politics’ and that the ZDF and ‘other security structures are literally used to silence, remove and oppress the people of Zimbabwe in a bid to keep ZANU PF in power.

“Further to this scheming, ZimEye on 05 June 2020, claimed that the ZDF had helped the MDC-T, led by Thokozani Khupe to reclaim Morgan Richard Tsvangirai House, formerly Harvest House, from the MDC-Alliance. These claims and assertions are the work of very fertile imagination of the authors of these articles, which members of the public should dismiss with the contempt they deserve. They are aimed at unfairly using the security establishment to drum up support for their planned illegal anti-Government protests.

“It should be noted that, as a professional, loyal and patriotic Defence Force, the ZDF does not involve itself in anti-people activities that are designed to achieve anti-Government political and economic objectives by some malcontents within our citizenry.”

As the demonstrations project began to crumble, what was not surprising on this whole charade was that the US was quick to condemn the Government for alleged political intimidation over the arrest of Chin’ono.

This was before the police had formally charged Chin’ono.

“We have learned (Zimbabwe Republic Police) officials are at Hopewell Chin’ono’s home now and are deeply concerned for his welfare. President @edmnangagwa noted the important role investigative journalists, like @daddyhope, play in shedding light on corruption. Political intimidation of the press has no place in democracies,” the US Embassy in Harare tweeted.

The Delegation of the European Union to Zimbabwe quickly followed suit in attacking Zimbabwe, saying:

“We are concerned by the arrest of @daddyhope (Chin’ono’s Twitter handle name) this morning and call for his immediate release. Journalism is not a crime, but a crucial pillar of any democratic society and of the fight against corruption. Journalists and freedom of expression deserve protection.”

Not to be outdone was the British Embassy which told the authorities to ‘follow the rule of law and uphold media freedoms and freedom of speech’.

What is now increasingly becoming clear is that the West has been playing a role in trying to remove from power the country’s leadership through their proxies and sponsoring of anarchy.