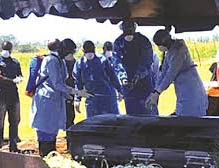 FOLLOWING the recent declaration of a State of National Disaster by President Emmerson Mnangagwa, in order to prevent the spread of COVID-19, we are disturbed by the level of laxity in certain quarters.

At the time of the President’s declaration, Zimbabwe had not yet recorded  a single case of  COVID-19.

As we go to press today, we have not only recorded three cases, but one victim has already succumbed  to the deadly virus.

Our general observation is that a good number of people are not observing safe ‘social distance’ between each other.

This is if we go by queues recently witnessed at banks, crowds at open markets, congregants at some churches and patrons at a number of beer outlets.

We are, however, happy to note that some churches have voluntarily suspended their services as a preventative measure.

But this apparent lack of attention from some quarters to this potential disaster is not a first in Zimbabwe.

When Cyclone Idai hit Zimbabwe last year in March, its arrival was not a complete surprise.

Advance warnings had been ignored by relevant authorities, as well as the people being warned for their own safety, as the cyclone savaged neighbouring Mozambique.

This is no different from the present COVID-19 threat among us today.

But this time the responsibility is on us all.

Once bitten we should be  twice shy.

For we have already heard of the devastating effects of this virus the world over, and as early as this week, even here in Zimbabwe where we lost our beloved son.

But we still see people literally breathing into each other’s faces in bank queues,  open markets and commuter omnibuses.

This disease is highly contagious.

This is risky as the person next to you might easily be a COVID-19 victim.

The domino effect, where initially, may be, only one person had been affected could see hundreds more fall prey.

People suspected of having the virus or might have been in contact with a victim are normally advised to go into self-isolation.

This, at times, might sound a stiff penalty to those who don’t appreciate the potential danger to life from the disease.

Disobedience, in case you might have been infected, could lead to hundreds more catching the disease, with some even dying.

Compulsory testing is also a step in the right direction.

After all, COVID-19 is not a death sentence as less than five percent of its victims have died.

However, the elderly, the very young and those with compromised health conditions are more prone to succumbing to this virus.

New measures announced by the President on Monday should go a long way in driving the point home  to those not taking the pandemic seriously.

The blanket ban on gatherings around bars, beerhalls and nightclubs, among other social centres of attraction, is welcome..

Strict screening of people from COVID-19 infected countries, with a mandatory 21-day self-quarantine is very appropriate.

These are preventative  measures which guarantee safety first.

Surely the feeling of guilt, when one knows he/she is spreading the disease through deliberate contact with innocent souls, should hang around one’s neck like the proverbial albatross.

As for crowds, law enforcement agents should make sure that measures announced by the President are carried out to the letter.

We still find commuter omnibuses crammed to the rooftop with passengers.

This is a recipe for disaster.

We await measures promised by the President to take care of this eyesore.

We also expect to see banks taking an aggressive stance in persuading their clients to make more use of electronic transactions.

People should stay at home and avoid unnecessary travel, even locally.

Voluntary self-isolation is key to combating the spread of this dreaded virus.

However, there is another unfortunate development which shows sickening naivety and complete absence of conscience by some Zimbabweans.

We have, among us, some gremlins who seem to cherish the onset of this disease by spreading falsehoods on social media platforms.

They come up with imaginary figures of COVID-19 victims and then go on to accuse Government of hiding the truth.

Already, WHO has dismissed this trash.

There are others who have accused the Government of lack of preparedness for political expediency.

This is a new disease, and even developed countries like Italy and the US are failing to cope.

What more with Zimbabwe whose health system has been battered by years of the heartless sanctions from the West.

Zimbabweans should unite in the fight against this virus and the apparent laxity in some quarters should be unreservedly condemned.

The President has already declared a State of National Disaster before going further by announcing measures to direct people’s behaviour.

There is yet another step he could take.

However, restrictions involved in a lockdown, if we come to that, might make the laggards catch up with reality.