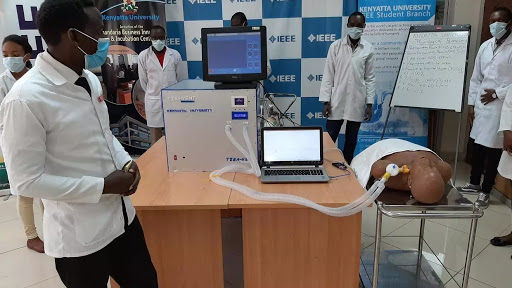 FOR COVID-19 patients who respond successfully to intensive care treatment and are discharged from hospital, the road to recovery can still be a lengthy one.

The latest report into patients admitted into critical care for COVID-19 so far in England, Wales and Northern Ireland showed that, of 2 249 patients for whom data was available, only 344 (15 percent) had been discharged alive.

A similar number had died (346 patients), while the majority – the remaining 1 559 – were still in early stages.

As it is early days in the spread of the virus, the figures from the Intensive Care National Audit and Research Centre (ICNARC) do not paint a complete picture.

Additionally, little is known about what the recovery process looks like, but what is clear is that it will take time, even after leaving hospital.

Brian Mpaso (34) from Corby near Northampton was discharged from hospital after 18 days, including five in the hospital’s intensive care unit (ICU).

He was not on a ventilator (the most intensive treatment) but stated that: “When I get up and go to the bathroom or to the garden, especially when I have a shower, I get really breathless afterwards.

The doctors gave me exercises to utilise the whole of my lungs. They didn’t give me any timeframe (for getting better).

I still feel pains and breathing is a very new thing.

I never thought one day I would learn how to breath.

I had always taken breathing for granted, but this time I learnt it the hard way.”

It is a general rule that the sicker you are, the longer it will take to recover.

As such, COVID-19 patients who have been on a ventilator will face the toughest convalescence.

The first step for those patients will be for their doctors to decide if they can be taken off sedation and they will then try to get them breathing through the machine themselves.

Only when the patient is able to do this will the clinicians remove the breathing tube, enabling the patient to speak, which, in some cases, – depending on how long he/she have been incubated – will be the first time in a while.

The ICNARC figures show that, of those who have required ventilation in the UK so far, only a third (127 out of 388) have survived.

Men were also more likely to die than women, 52,2 percent compared to  44,6 percent.

While the findings are not conclusive, these risk factors are confirmed by data from other countries.

Even after coming off the ventilator, the patient will still need assistance getting enough oxygen and this is likely to be through a mask or, possibly, a continuous positive airway pressure ventilator (CPAP), which sits somewhere between a mask and ventilator on the intensity scale.
The patient will stay on the ICU until safe to move to a ward – one intensive care doctor told this writer this would probably take one to three days after coming off ventilation – where reduced intervention is needed.

But even then, the struggle is still far from over.

Dr David Hepburn, an intensive care consultant at the Royal Gwent Hospital in Newport, wrote on Twitter: “If you end up on ITU(intensive therapy unit) it’s a life-changing experience.

It carries a huge cost even if you do get better.

As our patients wake up, they are so weak they can’t sit unaided, many can’t lift their arms off the bed due to profound weakness. They need to be taught to walk again, breathe again and have problems with speech and swallowing.”

At the bare minimum, to leave the ICU, sedation will have to have worn off and breathing must have improved to the necessary threshold.

Once they are transferred to a ward, where they are likely to spend a week-or-so, being able to breathe without oxygen assistance is a prerequisite for being discharged from hospital.

Work will also begin in hospital on remedying the rapid weight loss and resultant weakness the patient will have suffered through muscle wastage as the body went into crisis mode during ventilation.

In the first week after ventilation, even sitting up in a chair can be a major first step, but as movement increases, the muscles improve and get stronger by the day.

When the patient leaves hospital, he/she would still be restricted for weeks-to-months in terms of exercise, due to both the damage to lungs and muscles.

This will be the same for patients such as Ngoni, who have not been on a ventilator but instead on a CPAP or high flow nasal oxygen therapy, but their recovery time will be shorter.

Ngoni said he can already feel his breathing improving daily.
So those who have survived COVID-19 will still have to go through painful recovering stages.

In normal circumstances they were supposed to rehabilitate in hospital but now one is literally thrown out with an untrue certificate of being healed while this is done to create beds for the dying who are in a long queue in search of life.
Never again will the world face such a ruthless enemy.

#Statistics taken with great thanks to The Guardian. For views and comments, email: Vazet2000@yahoo.co.uk