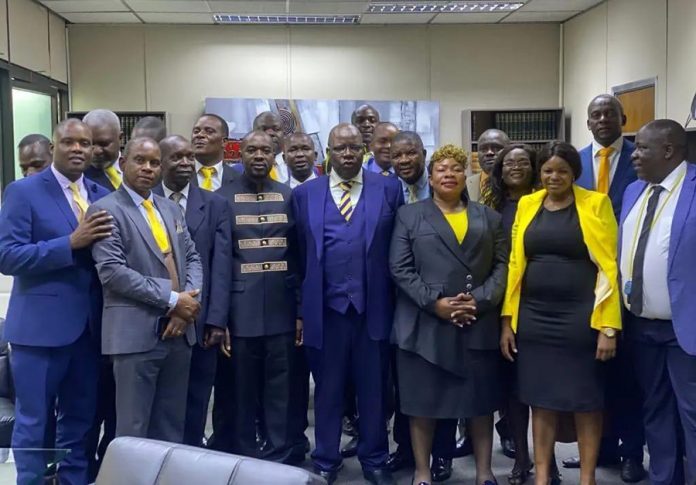 NELSON CHAMISA’s Citizens Coalition for Change (CCC) risks implosion if recent events in the party are anything to go by.

A few years after crowning himself president of the former MDC-T, the party is now a pale shadow of its former self: what is left is just political debris, a lot of bullying and fear among members especially the top hierarchy.

Chamisa’s unsuccessful political career has been mired in controversy coupled with heavy-handed dictatorship. He has been accused of being a stumbling block and single-handedly destroying CCC.

Recently, Parliament offered US$40 000 housing loans to each sitting member, US$500 000 for individual Ministers and US$350 000 for their Deputies.

Chamisa could not stomach the fact that his lawmakers had accepted the loans he considered to be ‘bribes’.

He felt his MPs had ‘sold out’ the movement and were wrong for accepting the loans availed to them by Parliament and insisted they must face punishment.

But still Chamisa wanted the MPs to seed 10 percent of the US$40 000 to party programmes.

Said Chamisa: “The CCC was not supposed to drink from this poison chalice. They have joined the gravy train and they have crossed the line. I have told them that if you do not act accordingly you know what it means, the citizens are waiting for you, and they are going to punish you and punish you happily.”

The MPs were not amused by Chamisa’s threats.

They felt he was deliberately trying to de-campaign them in front of their supporters to pave way for his favoured candidates come 2023.

Simply put, Chamisa has opened a can of worms by confirming what we at The Patriot have always written: the factionalism and unfair practices rocking the opposition.

It should be noted that being a House of Assembly member comes with benefits that have nothing to do with party affiliation.

Despite having a meeting with CCC Chief Whip Prosper Mutseyami, Chamisa’s MPs remained adamant they would not return the money they received nor would they contribute 10 percent to the party as suggested by their leader, who wants to drink from the ‘poisoned chalice’ too.

They felt that Chamisa was being selfish as he had also benefitted during his Government of National Unity (GNU) days.

They even demanded an explanation over the $US120 000 that he received for the bullet proof vehicle.

Last week the MPs held a meeting where they discussed this issue of loans.

They agreed they deserved the loans and would, in their personal capacities, pay the debts after all.

Chamisa was not present at the meeting.

This is not the first time Chamisa’s MPs have defied him.

In 2020, they defied him when he wanted them to resign in protest to recalls of MDC-A MPs by Douglas Mwonzora.

Allan Norman Markham, the only MP to decline the loan cleared the air by stating that he had turned down the loan because he did not agree with the repayment conditions.

The MPs went on to set up a five-member committee to meet up with Chamisa to try and make him understand that they were entitled to their benefits as MPs.

One CCC MP who spoke to this publication said Chamisa was using the loan issue to weed out those MPs he viewed as problematic: the likes of Tendai Biti, Murisi Zwizwai, Charlton Hwende, Happymore Chidziva, Willias Madzimure, Settlement Chikwinya and Daniel Molokeli, among others.

The MP further stated that the US$40 000 loans had escalated Hwende and Chamisa’s feud, with the former aborting the Mgwazo, a door-to-door mobilising strategy.

At every street there will be a point person co-ordinating people for mobilisation.

The two recently took to social media announcing they would be taking a break as they were being attacked by Gift Ostallos and other CCC members.

addressed a ward meeting of @CCCZimbabwe volunteers in Mhondoro. This is probably my last meeting, l have noticed the negative comments from our CCC citizens on twitter whenever l go on Mgwazo in Mhondoro. I have also considered the stress and anguish which most of the comments cause to my teenage kids. The reason l agreed to help in Mhondoro was to assist in growing the rural vote. I did 38 weekend meetings this year funding myself and abandoning my work at my logistics company. As a leader in the movement l have a responsibility to take into account the negative comments on twitter and also self-introspect. I will use the December holiday to do exactly that. I love my Citizens movement the @CCCZimbabwe and will continue contributing in other areas.”

Chamisa is said to have announced that the mobilisation activities were not going to guarantee anyone a seat come 2023.

According to inside sources, Chamisa believes that those who were part of the mobilising campaign (Mgwazo) were doing it for their friends, at the same time indirectly campaigning for themselves and had reiterated that he would be the only one signing for the party’s candidates come 2023.

But the other members have hit back saying there are other signatories, Hwende and Sikhala, known at the Zimbabwe Electoral Commission.

They even accused him of fraudulently spending money meant for Mgwazo.

Most of that money is coming from the Diaspora through the #GoFundMe platform, fleecing thousands of unsuspecting Diasporans.

Most of the monies are coming through Chamisa himself and as he has no party structures or anyone to handle the party’s finances, he is basically a law unto himself.

He does what he wants with the Citizens’ money.

And because he believes they have created a faction of their own, he withholds the money.

One would not help but question why Chamisa would be making so much noise over the MPs loans when he has unashamedly benefitted from the go fund me proceeds.

He has set up businesses from funds meant for regime change projects in the country dished out by the naïve Americans.

According to the source, Chamisa is living in his own dark web of fear, because of the factionalism rocking the party he fears there is an alternative leader rising in his own party but his biggest dilemma is that he cannot pin point exactly who they are.

He is uneasy because the only people who seem to want him are the general CCC members, the citizens they are called, but the people who work besides him are over him.

They have lost all respect for him.

His MPs telling him to go hang over the loans proves that he has zero power over his MPs.

They wish to see the back of his head exiting the party.

According to the source, the MPs were also not happy with Ostallos who was quick to go on social media castigating them over the US$40 000.

They feel he is growing too big for his boots when he can only be likened to a baby with milk on his nose in the party.

The old guard are also not happy about the recently formed Youth Task Force that is being led by Takudzwa Ngaidzore and others who they feel do not have what it takes to be members of the task force. Other committee members include Stephen Sarkozy Chuma, Senzeni Maphosa, Womberai Nhende, among others.

The old guard in the party believe Chamisa is depending  on the ‘citizens’ to back him as they are in the dark and are not aware of the many faces the leader has behind the youthful face.

They vowed that if Chamisa loses elections come 2023 that will be the end of his tenure as CCC president.

Chamisa has used the divide and rule tactic to secure power in a party he is no longer welcome.

He is slowly fading away.

In the by-elections held over the weekend, CCC lost three seats to the ruling party ZANU PF.

The development trajectory led by President Emmerson Mnangagwa clearly shows that the few people who support CCC are becoming insightful on what true leadership is like.

Certainly, Chamisa is fading away.