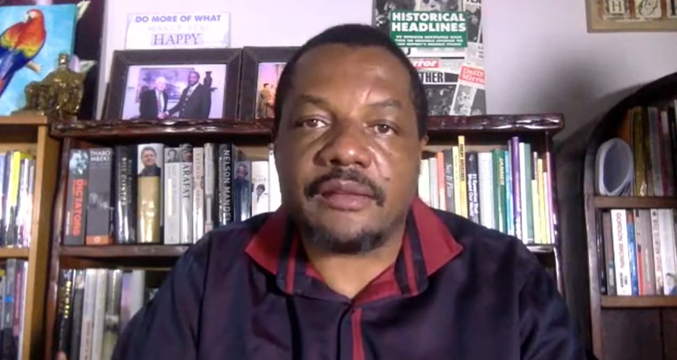 WHEN one of the country’s biggest sell-outs suddenly makes a U-turn and admits that sanctions imposed on Zimbabwe are not only affecting targeted individuals but the ordinary citizen, it can only be viewed as a ‘Damascene’ moment.

Hopewell Chino’no was forced to eat humble pie after witnessing first-hand the effects of the illegal economic sanctions imposed on Zimbabwe by the US and its Western allies.

In an emotional rumble on Twitter, Chin’ono could not help but express disappointment at the #GoFundMe platform for withholding funds meant for some students he had helped.

Said Chin’ono: “Let me make this clear, because of sanctions imposed on the Zimbabwean Government leaders and their surrogates @gofundme blocks the release of money raised on its platform. It demands 101 things. It is dishonest to say they don’t affect ordinary folk; it is in black and white.

I have always been opposed to sanctions because ZANUPF elites have looted more under sanctions than they looted before them, it doesn’t care anymore. Sanctions are an inconvenience to ZANU but they have not helped us as citizens.

If l didn’t have money when the Masvingo students needed urgent surgery they could have died because the money raised was blocked because of the sanctions issue.

Now only a foolish man or woman will say that sanctions don’t affect ordinary Zimbabweans.”

It is quite embarrassing if one recalls how the Harare American Embassy devotes time on radio and the social media denying that sanctions affect the citizens more than they affect those apparently ‘targeted’. Sanctions are a form of warfare, whether the people believe it or not; we are at war with the US. The US has no permanent friends but permanent interests. The nation must recall how they dropped MDC founder and leader Morgan Tsvangirai when he was no longer a ‘polictical option’. The irony is that it was the current dispensation that was humane enough to settle his hospital bills and give him a decent farewell.

The  US and its allies who had been ‘hand holding’ him as he demonised his nation did not even show up at his funeral.

Chin’ono, has over the past few months been singing from a different page.

We have witnessed him traipsing all over the world defending sanctions and claiming they were targeting certain individuals until the sanctions ‘targeted him’.

Not too long ago, he criticised South African President Cyril Rhamaphosa for asking US President Joseph Biden and his counterparts to remove sanctions on Zimbabwe as they were not only affecting general citizens but the neighbouring countries as well.

Chin’ono went on: “…America has a right to do what it wants with its foreign policy.”

At one point, Chin’ono spoke against sanctions, that is until he felt it was in his best interest to sing for his supper.

Could Chin’ono’s ‘Damascene’ moment be a smokescreen to help his buddy Nelson Chamisa access the blocked funds on the #GoFundMe platform?

After all, the duo thrive on opportunistic politics.

We all know after the Americans have shown their unwillingness to financially support Chamisa until he meets some of their requirements. The only money supporting him is coming from donors in the Diaspora via the #GoFundMe platform.

The US has continued their onslaught on Zimbabwe regardless of pleas from their puppets caught in the crossfire.

Well, to to Chin’ono and Chamisa we say: “Hoist by own petard!”

The US slapped sanctions on Fossil Contracting, a company involved in the supply of agricultural inputs and the building of roads in Zimbabwe; all this to cripple the country’s economic development.

Not surprisingly, Vanguard Africa applauded the US’ latest sanctions list and went on to say: “… the Zimbabwe sanctions programme targets human rights abusers and those who  undermine democratic processes or facilitate corruption. US sanctions do not target the Zimbabwean people, the country of Zimbabwe or Zimbabwe’s banking sector.”

Found guilty of money laundering and corruption, Glencore was not sanctioned by US OFAC and their bank accounts are not being blocked. But Sakunda was discriminated and sanctioned for corruption allegations without trial despite the Zimbabwe Parliamentary Committee disproving some of the major allegations. This will likely be followed by their bank accounts being blocked. Sanctions are not about fighting corruption but breaking Africa’s investors and competitiveness…It’s war and it’s time Zimbabweans stopped believing that this issue will be solved by negotiating with the enemy,” Matinyarare added.

However past incidences prove otherwise.

How a country leading in war crimes, genocide and corruption, like the US, can claim unilaterally high moral ground boggles the mind!

In our previous issues we have exposed how the US is funding CSOs and other organisations to destabilise the country through USAID and other entities.

Now is the time to make a bold stand and support countries like Iran which are giving the West a taste of their own medicine.

It is not enough to simply say: “Bravo Iran!”

We must also slap them back with retaliatory sanctions.

After all, they need our natural resources more.

On their hands is the blood of millions of Zimbabweans who have lost their loved ones as a direct or indirect result of sanctions.

If it is difficult to access funds to save lives from a mere #GoFundMe platform, how difficult will it be for individuals and institutions in the country.

Sanctions go against the Universal Bill of Rights and fundamental human rights as stated by the UN.

On June 13 2OOO, Chester Crocker crocked: “… to separate people from ZANU PF, we are going to have to make the economy scream and l hope you, Senators, have the stomach for what you have to do.”

Well Zimbabweans have the stomach to resist the brick bats thrown their way by the malicious Uncle Sam.

Zimbabwe’s economy will continue to grow in spite of all the obstacles.