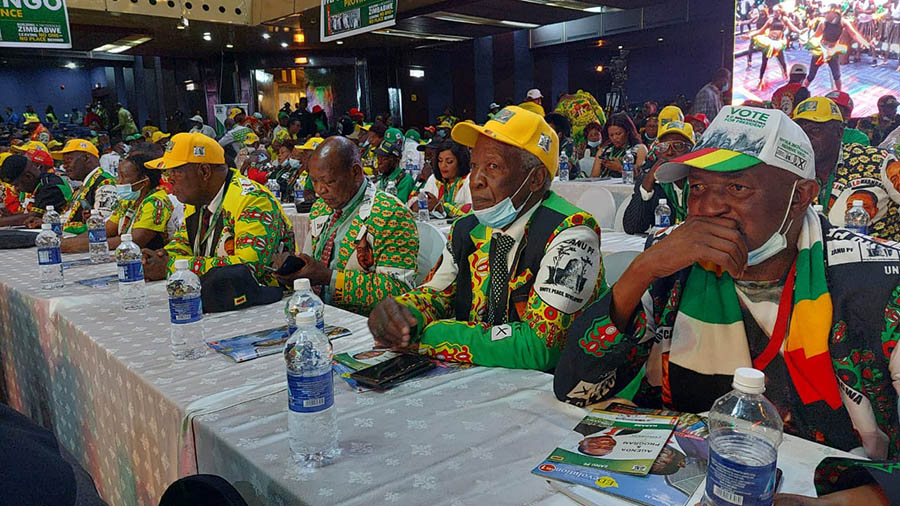 WITHOUT ZANU PF, civil society organisations (CSOs) in Zimbabwe will shut down.

Secretly they want ZANU PF to win, and they know it will, because it has been transforming the lives of the people albeit the sanctions restraints.

To remain relevant and justify their operations they must present ZANU PF as a ‘monster’ out to get its citizens and they do so by any means necessary – fake news, abductions, stirring violence, etc.

There were real fears among CSOs in 2017 when the New Dispensation came into power and the Western world seemed to view it positively.

There were budget cuts and some lost their jobs.

Once again there was need to ferment chaos.

They have since pulled the ‘Mugabe’ threat to the Western world as stated in a report ‘Civic Space Contestation Ahead of 2023’ by the Zimbabwe Democratic Institute, a so-called ‘human rights watchdog’.

They have alleged, “The government under President Mnangagwa has presented a lot of amendments and legislation including the Constitutional Amendment Bill No.1 and 2, the Patriotic Bill, Cyber and Data Protection Act, Freedom of Information Act and the Private Voluntary Organisations (PVO) Bill.”

While our citizens sell out to line their pockets and live lavish lifestyles, their Western handlers are in it to protect their national interests as they have repeatedly stated on their sanction bill.

There is no mention of the Zimbabwe’s interests.

Their handlers have a clear agenda that goes back to the 2000 Land Reform Programme.

In what now seems like an unending obsession with the country and an unwitting admission of Brits meddling antics, Zimbabwe was part of a fiery discussion at the House of Lords on October 27 2022.

They questioned the proposed Patriot Bill.

“I have raised on numerous occasions with ministers the continued repression of civil society in Zimbabwe, including of trade unionists. Can the Minister tell us the latest FCDO assessment of the passage of the Private Voluntary Organisations Amendment Bill, which Ministers have acknowledged could be used to restrict civil space?” asked opposition chief whip Lord Collins of Highbury.

Indeed, it is only those with a hidden agenda who are disturbed by progressive laws being initiated in a small country like Zimbabwe – laws that protect the country’s interests.

Zimbabwe is not the first country to craft such a law which is designed to safeguard the country’s interests against unscrupulous organisations.

What do the Brits mean by free and fair?

It is not a secret that for the West elections can only be free and fair if the opposition wins in Zimbabwe.

It is a fact that it was the aristocrats (House of Lords) that sponsored the BSAC that dispossessed and ‘owned’  Zimbabwe.

Over 100 years later they are still considering Zimbabwe as their property.

They will not stop.

A report by the Central Committee to the 7th ZANU PF National People’s Congress has exposed plans by the opposition party and some so-called civil society organisations (CSOs) to incite violence ahead of the 2023 harmonised elections.

Our publication has previously exposed these entities as conduits of Western countries which are pursuing illegal regime change in Zimbabwe.

Every move they make is well-calculated.

This time around, it is the, Zimbabwe Election Support Network (ZESN) and the Election Resource Centre (ERC).

They purport to be engaged in ‘governance issues’ in the country yet their main aim is to destabilise the nation at the behest of their Western handlers in their quest to effect regime change.

Currently, ZESN and ERC are being sponsored by Arnold Tsunga’s National Democratic Institute (NDI) under strict supervision following a 2020 scandal where funds where embezzled at the two organisations, forcing their sponsor to temporarily withdraw funding.

“On the other hand, Zimbabwe Election Support Network, (ZESN) and the Election Resource Centre (ERC) are planning to conduct parallel voter Tabulation during the 2023 Harmonised Elections,” reads part of the report.

“In pursuit of that they will deploy election observers at all polling stations who will also double as CCC agents. These will send results to their established Command Centres and have consolidated results before ZEC announces.

If ZEC announces what is different from what they have they are planning to start violent protests.

This plan is a recipe for chaos and mayhem as well as a serious security threat.”

Gowan placed ZESN at the centre of this intricate web as the elections body in Zimbabwe that led a parallel process and would conceivably take over the role in the event of regime change in Zimbabwe and dissolution of its structures and institutions.

In 2004 it received a National Endowment for Democracy (NED) grant to, “train and organise 240 long term election observers throughout Zimbabwe.”

NED is a US-based institution that was formed in 1983 purportedly to ‘promote democracy in other countries by promoting political and economic institutions such as political groups, trade unions, free markets and business groups’.

Take note reader,  the  National Democratic Institute (NID) that is currently sponsoring ZESN and ERC was also founded in 1983 in the US.

It is listed as a ‘non-profit American NGO that works with partners in developing countries to increase the effectiveness of democratic institutions’.

Is it not ironic that such institutions from the US purport to be championing democracy yet they are in fact sponsoring unruly elements to cause anarchy in various countries, Zimbabwe included?

Not to be outdone of course is UK-based Chatham House whose so-called mission is to ‘help governments and societies build a sustainable, secure, prosperous and just world’.

The Patriot has time and again exposed Chatham House (founded in 1920) as an institute hostile towards Zimbabwe.

In fact Zimbabwe is always on the table.

But back to the Congress.

The report by the Central Committee went on to state that:

“The opposition leader, Nelson Chamisa’s war cry, ‘faka pressure’ is also likely to incite violence among members of the opposition ahead of 2023 harmonised elections.

The National Security Department notes that as the nation prepares for the 2023 harmonised elections, there could be an increase in violent activities as the opposition resuscitated their Democratic Resistance Committees, (DRCs) as witnessed in Nyatsime, Chitungwiza.”

CCC legislators Job Sikhala and Godfrey Sithole as well as other members now popularly known as the Nyatsime 16 are in remand prison facing charges of inciting public violence.

Infrastructure and and properties were destroyed during the frenzied attacks. In the western world Job and company would be considered a national and security threat with the same status as whistle blowers Julian Assange and Edward Snowden for these no place or embassy was safe. Assange is currently in a high security prison in the Uk with talks of possible extraction to the US where he will die in prison.

It is on record that the opposition has always been religiously taking orders from the West on how to plunge the country into civil strife, through sabotaging the economy and brewing violent disturbances.

Participants at the House of Lords further discussed the incarceration of Job Sikhala whose rights were ‘being abused’.

They even claimed there was so much violence in the country and that the world was watching.

Said Lord Oates: “Across Zimbabwe political violence is raging as we lead up to the 2023 general elections…. Will he join me (The Minister for Africa?) in calling on the Zimbabwe Government to end this political violence now? Will he also join me in making clear to ZANU PF officials and Ministers, members of the Zimbabwe Republic Police and Zimbabwe prison officers that the world is watching and holds them accountable for the safety and security of all Zimbabweans.”

Indeed the world must watch.

The world must watch a country bring to book criminals without fear of their Western handlers.

The world must watch the remarkable achievements made and being by the Second Republic as seen by the significant strides in the ongoing development projects as well as the recent successes in the agriculture and mining sectors.

According to the National Communication Centre, under the New Dispensation the mining sector has grown from US$2,7 billion in 2017, to US$3,5 billion in 2020 to around US$5,2 billion in 2021.

Roads, dams, schools and clinics as well as water and sanitation infrastructure have been constructed, leaving no one and no place behind – something the British despise.

They argue Britain’s dysfunctional politics leaves a lot to be desired, never mind the looming recession.

At the recently held Congress, President Emmerson Mnangagwa re-iterated that Zimbabwe would never invite former colonisers back to rule the country.

The Congress ran under the theme: ‘Building a Prosperous Zimbabwe, Leaving No One and No Place Behind’.

“We continue to handle our affairs as an organised, tried and tested revolutionary party,” said President Mnangagwa.

“Guided by the party policies and resolutions, our ZANU PF-led Government has boldly made decisions and instituted policies that have resulted in cross-cutting reforms and transformation of various departments of Government.

“We successfully implemented the Transitional Stabilisation Programme which led to the present comprehensive and all-encompassing National Development Strategy 1.”

As the much anticipated 2023 elections draw nearer, CSOs must be reminded that Zimbabwe is not an extension of Britain or the US.

Their actions are not going unnoticed.