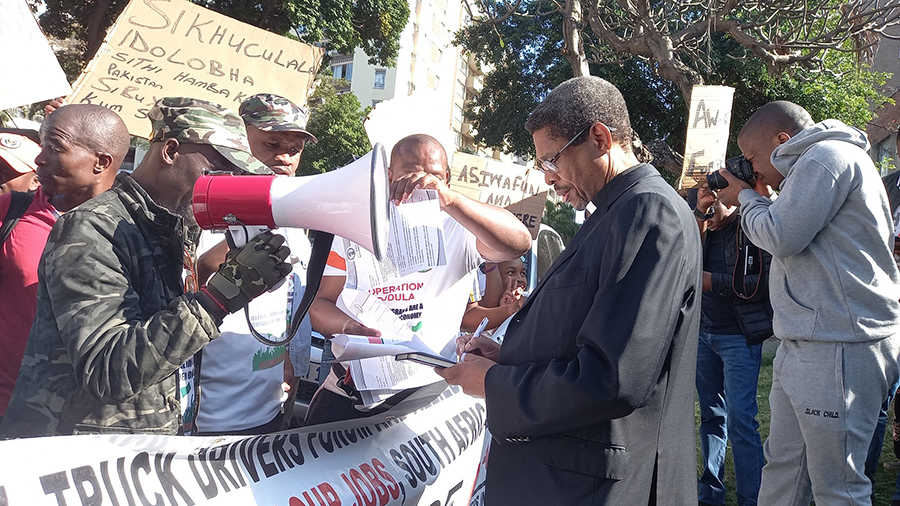 FOR many South Africans, a foreigner is a black person born north of the Limpopo; in Zimbabwe, Mozambique, DRC, Somalia, Nigeria or Malawi, among a host of other countries.

A foreigner is a fellow black person who enters South Africa, takes menial jobs, gets medical treatment at one of the hospitals in the country as well as enjoys other ‘undeserved’ social benefits.

Last week, the country watched with shock and disbelief a video in which a Member of the Executive Council (MEC) of Health, Limpopo Province, subjected a Zimbabwean patient to a vitriolic diatribe in one of the hospitals in Bela Bela.

Her claims that the influx of undocumented foreigners was ‘killing’ hospitals were baseless.

“You speak Shona? Then how do you find yourself in Bela-Bela when you are supposed to be with Mnangagwa,” she ranted.

“You are killing my health system. I’m operating with my limited budget, that is why when my people want health services, they cannot get them and that is endangering the community, this is unfair,” she said to laughter and murmurs from onlookers in the ward.

It was contrary to the spirit of hunhu/ubuntu that characterises and binds Africans.

Her comments were calculated to incite violence and hatred at a time ‘Operation Dhudhula’ is fuelling xenophobic attacks on foreigners in the SA.

Dehumanising another human being based on migration status is cruel.

Telling a patient awaiting an operation she is a burden is insensitive and contrary to the Hippocratic Oath.

Afrophobia is the hatred of other African people.

The rights set out in the Constitution of South Africa provide for all people within South Africa, regardless of their nationality or legal status.

The Constitution states that everyone has a right to access healthcare services, and no-one maybe refused emergency medical treatment.

The National Health Act confirms that all persons in South Africa can access primary health care at clinics and community health centres.

The Refugees Act of South Africa states that refugees in the country have the same right to access healthcare as South African citizens.

Again, the Department of Health 2007 Circular confirms that, refugees and asylum seekers, with or without permits, can access the same basic healthcare services as South Africans (which means it is free at point of use, but can be charged thereafter).

South Africa has always been outstanding as a black country that hates other black people.

And statements by Ramathuba could further spark tensions against foreigners.

During their struggle for independence, Africa looked after South Africans in their time of need during the apartheid era.

According to annual reports, analyses by the Office of the Auditor-General and statistics show that irregular expenditure, mounting medico-legal claims and shocking vacancy rates is what is killing hospitals and healthcare in Limpopo.

The Office of the Auditor-General proved there were no indications of any significant adverse impact of foreign nationals on the healthcare system in the province, but enough evidence of poor management and weak financial controls contributing to a system of distress.

Since Ramathuba took up her position in 2015, medico-legal claims against the department have increased to billions of rand, posing a serious threat to the province.

Staff vacancies for critical posts, like specialists and nursing, have also increased — yet more than half of the department’s budget is on compensating employees. Since 2016, a year after Ramathuba’s tenure, staff vacancy rates have been increasing with more than half of all posts going unfilled by 2021.

Yet the department had 70 percent of its resources going to compensate employees, despite this staff shortage.

This leaves little resources for services.

While irregular expenditure is on a downward trend, a lack of consequence management appears rife, opening the door for continued deflection of resources.

Data shows that the department has been operating at half its capacity, rendering the statements by Ramathuba false, irrelevant and uncalled for.

As a doctor, her statements are inhumane.

The health and well-being of my patient, community and my broader African communities will be my key considerations

I will maintain the utmost respect for human life

I will not permit considerations of age, disease or disability, creed, ethnic origin, gender, nationality, political affiliation, race, sexual orientation, social standing or any other factor to intervene between my duty and my patient.

I will not use my medical knowledge to violate human rights and civil liberties even under threat.”

The Patriotic Legislators from the Pan-African Parliament (PAP) said Ramathuba’s conduct was not consistent with the spirit of Pan-Africanism and regional integration efforts being pursued by African leaders.

Now it is not only how Ramathuba’s statement was communicated but the nationwide impact the message has created of South Africans.

Such a message puts many lives in danger of neglect in hospitals because of nationality.

Vocal critic and leader of the opposition in South Africa, Julius Malema, came out guns blazing and lambasted Ramathuba for her misconduct.

South African President Cyril Rhamaposa reiterated that acts of lawlessness, intimidation or humiliation directed at foreign nationals, documented or undocumented, would not be tolerated.

But then, we have our own misguided elements stoking the fire of xenophobia against their fellow countrymen.

The likes of Hopewell Chinono would not let the moment pass them by without political capital; they just had to make those statements that could potentially endanger the lives of Zimbabweans in South Africa!

We should do away with the spirit of Afrophobia and embrace each other as Africans.

Lest our brothers and sisters down South forget: In their time of need, they turned to their brothers north of the Limpopo and we did not disappoint.

Or maybe, just maybe, some of the loudmouths fomenting trouble down South were still in their diapers or were busy aiding and abetting the apartheid system.