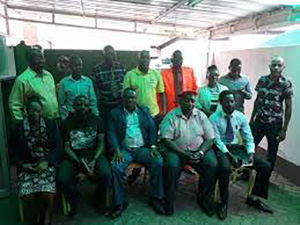 LITTLE known Federation of Zimbabwe Educators Union (FOZEU), is the latest Western funded regime change agent seeking to cause chaos and mayhem in the country through calling for nation-wide strike by teachers.

Violence and chaos are the latest methods the West is employing  to put Zimbabwe under the spotlight.

Teachers unions under the banner of the Federation of Zimbabwe Educators Union (FOZEU) recently rallied together to announce their intention to embark on a strike scheduled for June 20 to 24 2022.

The presence of FOZEU has never been felt and not many have acknowledged its existence despite concerted efforts by them to be felt and heard.

The unions have become a huge annoyance in their bid to please their masters.

They have pocketed lots of change for making some noise here and there whilst stirring international sentiment against their country through their actions; they create an image of a country with a poor human rights record, while fomenting public dissatisfaction amid a struggling economy, among other things.

Indeed, the economic challenges are there but the Government is working flat out to stabilise the economy.

These unions are simply not interested in a stable Zimbabwe.

They are working to uphold their end of the deal after some of their leaders, like  ARTUZ president Obert Masaraure and PTUZ secretary-general Raymond Majongwe, were paid handsomely to cajole teachers to embark on a strike after meeting US Charge d’ Affaires Thomas Hastings toward the end of April this year.

Among those present was Crisis in Zimbabwe Coalition president Peter Mutasa.

The trio met at the US Embassy where they were given instructions on how to paralyse the education sector through embarking on crippling strikes.

The US shenanigans do not only end there; they have been brazen enough to seek out more recruits in their quest to disturb the peace in Zimbabwe.

They are on a mission to recruit more people in order to push the country to a boiling point, to make the people restless and ungovernable.

In a press statement released on June 13 2022, the US Embassy called for interested  individuals and organisations to submit proposals on one of their ‘priority’ themes: ‘Democracy and politics, civic and political education, constitutionalism and elections, journalism, religion and political developments’.

These grants are intended to fund small projects up to US$250 000. The deadline for proposal submission is July 9 2022.

The West has spent millions of dollars in their quest to bring Zimbabwe to its knees but, unfortunately, have never, and will never, succeed in their efforts.

But back to the teachers unions.

Last year, remarks by the Minister of State, Foreign Commonwealth and Development Bureau, Tariq Mahmood Ahmad, in the UK House of Lords exposed an unholy alliance between the British government and teachers union in Zimbabwe.

Unwittingly he revealed that the UK had been working closely with trade unions, including teachers in Zimbabwe, to discuss, ‘salary issues’.

“We certainly have been meeting in Harare with various unions, including teaching unions,” said Ahmed as he briefed the House of Lords.

“Trade Unions form an important part of civil society in any country and we engage with them at all levels.”

From faking abductions, planning protests, getting themselves arrested to issuing ultimatums on the government if their demands are not met, these groups will stop at nothing in their efforts to try and destabilise the country and please their masters.

FOZEU was formed after an education sector meeting held at Zimbabwe Teachers Association offices on March 19 2018.

ZIMTA was to break ranks with FOZEU after noting the latter’s thirst for strikes; they also noted FOZEU’s intentions were of those serving a higher master than the teachers they claimed to defend.

FOZEU would call out ZIMTA as sellouts for not going along with their shady actions.

They claimed the federation was aimed at addressing fundamental issues that had eluded teachers under the Apex Council which is the umbrella body for civil servants organisations in salary negotiations.

The Apex Council is the voice of civil servants in the National Joint Negotiating Council (NJNC), a platform that brings to the negotiating table government and workers’ representatives.

Ironically ARTUZ president Masaraure is the chairperson of FOZEU whilst doubling as spokesperson for the Crisis in Zimbabwe Coalition.

The other affiliated unions, like PEUZ, were formed in 2012 after members accused ZIMTA, the Teachers Union of Zimbabwe and the PTUZimbabwe officials of leading lavish lifestyles at the expense of their members.

The leaders of ARTUZ and PTUZ are known to advocate improved working conditions and salaries for their members, whilst everything they do is a show to keep their masters happy and their pockets full.

Educators Union of Zimbabwe was formed in Bulawayo in December 2020. It was formed when the union leaders observed that other unions had deviated from their mandate of representing teachers’ interests and had started meddling in politics.

In November 2021, the call to teachers, by FOZEU, to down their tools went largely unheeded, simply because many of the teachers could see right through them.

In February of this year, they again called for a strike and, once again, things did not go as planned. Their calls for strikes have never succeeded, neither will this one.

By January of this year, indications were that FOZEU was not yet registered as a union and that it was operating illegally. Indications are also that Government does not recognise it.