Home Top News The Crisis in Zimbabwe Coalition no saint 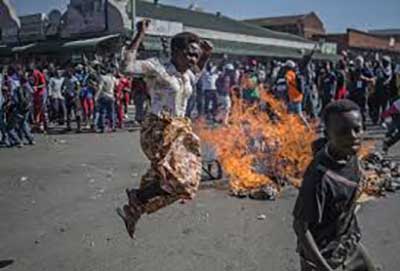 CRISIS IN ZIMBABWE COALITION (CiZC), a regime change outfit, which has continuously failed its Western masters in the regime change mission, has come out guns blazing, accusing State media of making false reports against the organisation.

In what they called “…a predictable pattern of defamatory propaganda articles,” the outfit accused State media of peddling falsehoods against the organisation.

The Patriot has, in previous articles, unmasked various NGOs in the country as agents of regime change and the CiZC is one of the kingpins.

“These malicious allegations are but a desperate attempt to find a scapegoat for the Zimbabwe government’s inability to run the country and its economy.

We want to set the record straight and affirm that all our activities as a Coalition, those of our members and other civil society actors are legitimate and legal; the ZANU PF Government often send their state security agents, especially from the Police Internal Security Intelligence, informers and serving agents of the Central Intelligence Organisation to attend civil society activities and we always accommodate them. This is because we have nothing to hide.”

On March 7 2022 CiZC wrote a letter to the SADC chairperson of the Troika on Peace, South Africa’s President Cyril Ramaphosa, requesting that he rein in His Excellency President Emmerson Mnangagwa’s administration over accusations of human rights abuses and the worsening economic crisis in the country.

They further requested for a long-term observer mission to Zimbabwe, saying the Government had already stolen the election through manipulation of the voter’s roll and long-term manipulation of key electoral levers.

“Citizens have a right to participate in political processes as enshrined under Section 67 of the Constitution.

Indeed there is nothing wrong in wanting to change a government or regime. What is, however, wrong is trying to do so ultra vires the Constitution and at the behest of Western sponsors who have their eyes greedily set on the vast wealth the country holds.

The CiZC is a collective of civil society organisations established in 2001. Over 300 NGOs are represented by this organisation including the Zimbabwe National Students Union (ZINASU), Zimbabwe Coalition for Debt and Development (ZIMCODD) and the Evangelical Fellowship of Zimbabwe, among many others involved in the regime change project.

CiZC guides and accounts for the actions and statements made by these organisations.

It is supervised by US institutions, including the United States Institute for Peace (USIP). USIP is the Republican counterpart of the National Endowment for Democracy (NED). CiZC is a major recipient of NED funding.

Chester Crocker an acclaimed regime change proponent in Zimbabwe is a board member of USIP and was its chairman between 1992 and 2004.  The USIP has admitted to its involvement in the creation of CiZC. In one of its reports it says: “Struggles for power within existing organisations have also created a demand for new forms of civil society activism and co-operation. The Crisis in Zimbabwe Coalition, established 2001, is a broad coalition of more than 300 NGOs and 15 national coalitions presently working on various fronts to facilitate the development of a proactive and broad based agenda and process for change.”

In its mission statement, the CiZC claims that it is a non-partisan civil society initiative and is not dictated to by either political parties, market forces or religious sectors.

In the month of February 2022 alone, CiZC received US$91 886 from NED. It would be foolhardy to think all the above figures were for charity.

CiZC has  been championing the Nelson Chamisa-led CCC movement and have not been very subtle about their financial support or otherwise of the opposition party.

Furthermore, CiZC has been the most vocal expressing  displeasure with the proposed Patriot Bill.

In January 2019, CiZC were behind co-ordinated terror attacks that rocked the country in an effort to try and effect regime change in Zimbabwe.

During the demonstrations, protesters vandalised fuel stations, burnt police stations, police vehicles, omnibuses and private vehicles. The hooligans barricaded roads, looted and vandalised supermarkets, clinics and went on to beat teachers who had reported for work.

It comes as no surprise that the outfit was part of the organisations that called for a mass stay away that went on to flop last month.

They had effectively prepared for violence, posting on their social media handles, along with organisations such as Team Pachedu, that they had been informed ZANU PF youth would be among the police officers, deployed all over the country for peacekeeping purposes.

They were prepping the public for an expected violent outcome, which never took place.

As expected, the peace loving Zimbabweans thwarted any hopes of any violent outcome, with many going about their usual business without fear.

The CiZC has always been mired in controversy.

They have even fleeced money from their handlers. In 2014 an audit report implicated the then director, McDonald Lewanika, in the misuse of the organisation’s funds.

That same year, the US government cut funding to CiZC and 14 other NGOs after they failed to account for over US$850 million extended by USAID as part of the regime change push between 2011 and 2014.

In 2014, it was on the verge of collapse after 10 NGOs pulled out of the umbrella body, citing a leadership crisis, corruption and abuse of office.

CiZC did not pay their statutory obligations, including the Pay as You Earn to the Zimbabwe Revenue Authority (ZIMRA) and the staff pensions to National Social Security Authority (NSSA) for an entire year, save for the month of May.

There is absolutely nothing new about CiZC crying foul.

These regime change outfits have, for the past 24 years, failed to deliver which has greatly disappointed their Western handlers who are pouring in millions of dollars every year to effect regime change.