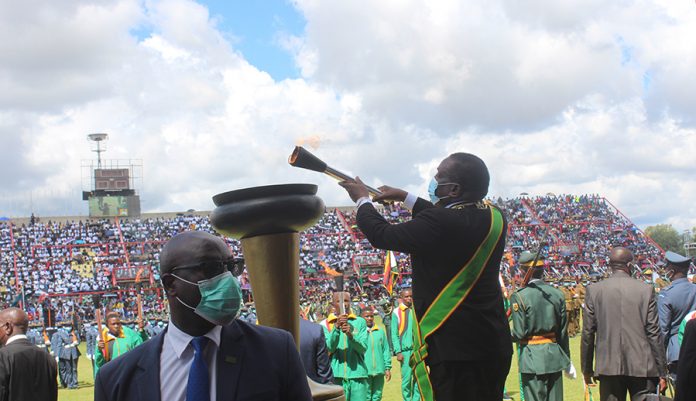 IN a country where unity has been threatened by the meddlesome West’s antics, it was befitting that the historic 42nd Independence anniversary lived up to its billing as the first of its kind in the country’s enduring history.

The fete, the first to be held out of its traditional venue, Harare, since 1980, brought the country together with Zimbabweans, for once, putting their differences aside to honour and cherish the heroes and heroines of the nation’s liberation struggle.

It was a rare sight for Zimbabweans, who have become accustomed to opposition politicians’  infantile and damaging brickbating, to see the same abandon their reckless political bickering to be part of the country’s most important day.

As it was in the beginning, during the anguish ridden days of the liberation struggle, there were no political tags towards the cause of cherishing the meaning and significance of freedom as well as defending the motherland.

It was, if the clock had been rewound, going all the way back to where it all began; when the brave sons and daughters of the soil decided to put their country first in order to free it from the shackles of colonialism.

And after years of unprecedented political antagonism between the people of Zimbabwe, there had to be an end to the madness.

There had to be a point where the people had to, once again, converge for a common cause.

Indeed, the coming into office of the Second Republic has deftly put in motion necessary processes for the coming together of the people of Zimbabwe as one people, one nation that is bound by the ideas, ideals and values of the liberation struggle.

The new administration has laid down structures for Zimbabweans to unite for one cause — that of developing their country.

And the celebrations in Bulawayo on Monday were the fillip needed to kick-start the processes of bringing the people together.

There could not have been a better place to buttress that clarion call for unity in the country than the theme: ‘Leaving no-one and no place behind’.

The Second Republic has made uniting the country and developing all corners a top priority.

And so it was that way in Bulawayo.

There they were in the VVIP stand; exchanging pleasantries, food, notes and anything that came their way during the proceedings!

There they were in the VVIP stand; cool, calm and collected, in the processes shedding the unfounded myths that they cannot add their voice to the clarion call for locals to build and develop their country as one people!

There they were in the VVIP stand; sharing notes on how to bring the masses together, on how to make their contribution towards national unity, peace and development!

While the politicians, the instigators of the divisions that have rocked the country since 2000 when Harare embarked on the Land Reform and Resettlement Programme, were exhibiting a rare show of unity, the masses did not need any convincing to take the cue.

In the streets, in restaurants, in bars, just about everywhere one went was a splendid demonstration of unity, a gratifying exhibition of people who do not need any swaying to embrace the fact that they are Zimbabweans, that they are the true and real owners of this country.

This is the Zimbabwe we have dreamt of, a country that goes about its business without the undue influence of outsiders, especially those from the West.

Bulawayo was, if the saccharine whispers from the corridors of power are anything to go by, hopefully the starting point towards our coming together as one people.

And the electrifying atmosphere in Bulawayo, the carnival atmosphere in that revered city, would be capped by an all-encompassing speech by President Emmerson Mnangagwa.

“This year’s celebrations are historic and extraordinary in that they are the first in which the main commemorations are being held outside the capital City of Harare,” he said.

“As per the promise of the Second Republic, the days of Harare being ‘bambazonke’ are now behind us. We are strengthening our unity, enhancing national cohesion and entrenching peace within our country, brick-by-brick, stone-upon-stone.

“May the passing of the Independence Flame today, through Makokoba Township, serve as a remembrance and an honour to these suburbs as the belly that incubated political activism and ultimately, our freedom and independence.

“We equally pay homage to the many trade unionists and nationalists who launched their confrontation with the brutal white settler-regime, from bases within other townships such as Pelandaba, Mzilikazi, Luveve, Mbare, Highfield, Sakubva, Mtapa and Mucheke. The nation is emboldened by their bravery and selfless sacrifices, and we promise never to forget the rich liberation heritage they left for us.

“As a diverse but one nation that is united under one (flag); we reaffirm and reinforce our unity, love and harmony for one another and for our great country. We refuse to be divided. The cords that bind us are much stronger than any differences which we may ever encounter.

“In unity, Zimbabwe is rising; no-one and no place shall be left behind as we march forward towards our Vision of a prosperous and empowered upper-middle income country by 2030”.

The future is bright, no foe can divide or destroy a united people.