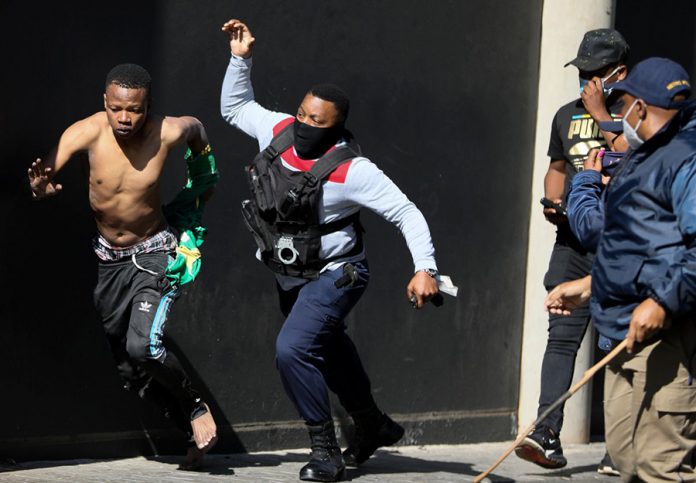 SOUTH AFRICA has been rocked by #freeZuma violent protests and mass looting as grievances over the jailing of former President Jacob Zuma spiralled into the worst unrest for the country in decades.

The protests and mass looting which by Thursday had seen more than 117 people killed and over 1 700 arrested, have been amplified into an outpouring of anger over the inequality that remains 27 years after the end of apartheid in South Africa.

President Cyril Ramaphosa has called it some of the worst violence witnessed in South Africa since the 1990s, before the end of apartheid, with buildings and vehicles set alight, highways blocked and businesses and warehouses looted in major cities and small towns in KwaZulu-Natal (KZN) and Gauteng provinces.

The military has since been deployed to help the overstretched police.

Ministers have warned that if looting continues, there is a risk of  running out of basic food supplies soon, but have ruled out declaring a state of emergency.

How bad is the damage?

More than 200 shopping malls had been looted by Monday afternoon, and retailers had lost an estimated 2 billion Rand, Bloomberg quoted the chief executive officer of Business Leadership South Africa, Busisiwe Mavuso, as saying.

Several shopping centres in Soweto – South Africa’s largest township which was once home to Nelson Mandela – have been completely ransacked, with ATMs destroyed, restaurants, stores selling alcohol and clothing shops all left in tatters.

In KwaZulu-Natal, where livestock has also been stolen, the unrest continues with ambulances coming under attack by rioters in some areas.

Cargo trucks were also torched leading to the closure of the N3, the highway linking sub-Saharan Africa’s biggest port in Durban to the economic hub of Johannesburg.

It is also the start of trucking routes used for transport of goods as far north as the Democratic Republic of Congo.

The Rand weakened as much as two percent to 14,4 to the dollar on Monday, the worst since February 25.

Vaccination programmes against COVID-19 have halted in most areas in KZN and Gauteng provinces, with some vaccination sites and medical centres having been looted and destroyed.

In fact, as President Ramaphosa delivered his address to the nation, looting was ongoing, with national broadcasters streaming the video of one of the South African National Blood Service Bank being ransacked alongside Ramaphosa, speaking in real time. Looters made off with computers, laptops and valuable medical equipment used for blood collection.

South African-based Insurance and Risk Expert Gift Murapa, said losses are being felt everywhere and getting the accurate statistics will be difficult.

“Most of these acts fall outside of conventional insurance policies so most companies will not make it back,” said Murapa.

“This will lead to direct loss of jobs and will increase the inequality gap.

“Looting was rampant in the lower income communities where service delivery has always been a problem.”

This came after Zuma failed to appear before the State Capture Inquiry, where he was being questioned regarding corruption during his time as president.

In defence of his defiance, the former head of state dismissed the probe as a ‘personal vendetta against him’.

However, Zuma later handed himself over to the police last week to start serving the 15 months sentence.

While the judgment has been hailed by some as a reinforcement of the rule of law, it has sparked a series of violent demonstrations by sympathisers and supporters of the former head of state in many parts of South Africa.

The day after Zuma was admitted to a correctional facility in KZN Province on the morning of July 8, the former president’s loyal followers began to protest within the province, calling for Zuma’s release.

Is it because the former president carries substantial weight among officials and grassroots members of the African National Congress (ANC) Party?

Or many feel his successor, Ramaphosa, has failed to provide decisive leadership?

It seems Ramaphosa had difficult decisions to make in the quest to portray a South Africa that upholds the rule of law and constitutionalism.

Some peace experts opine jailing Zuma was not necessary and a heavy fine would been appropriate.

“From a peace perspective, it was not necessary to jail him without due processes.”

Another peace expert, Paul Sixpence said the decision was not a rational legal decision.

“It was an emotive decision, driven by the need to show that South Africa is a bastion of the rule of law and constitutionalism,” said Sixpence.

The jailing of Zuma sparked the anger over the inequalities that persist in South Africa 27 years after the end of apartheid.

The mass looting also appears to be an inevitable reaction to a continued white minority rule in the country.

South Africa’s economy is still mostly under the control of whites who held power under apartheid.

This reality is regularly borne out in economic data, such as a 2015 statement from the JSE saying black South Africans held only three percent of the direct investment in the exchange’s Top 100 listed companies.

That grows to just 23 percent when you include direct and indirect holdings.

On top of this, capital, in its varied forms such as land, property and human capital remains heavily skewed in favour of white ownership.

At the time of apartheid in 1994, more than 80 percent of the land was in the hands of white minority.

Data from the Institute of Poverty, Land and Agrarian Studies suggests that just under 60 000 white-owned farms accounted for about 70 percent of the total area of the country in early 1990s.

And the land reform programme has been slow.

Less than 10 percent of the total land has been redistributed from white to black ownership since 1994.

Another cornerstone of the colonial times as well as during apartheid was to deny all black people access to economic opportunities as well as to limit their scope in both education and jobs.

These developments have had sequential implications and generational effects.

The result is that racial inequalities continue to be reproduced.

They leverage their ownership and control to extract rents and increase their wealth, while the majority of the blacks are still poor.

And the adoption of the market-based reforms in post-apartheid South Africa did not make it any better.

It meant that the already skewed distribution of wealth in the country got worse.

Whites continued to reap the rewards of their previous privilege under the new economic system while the majority of blacks reeled in poverty.

That is why racial tensions would flare in KZN under the current wave of civil unrest.

Underlying differences between groups of people (whites, Indians, Afrikaners and Blacks) stemming from apartheid have never been resolved in the province.

A few days later, heavily armed whites, Afrikaners and Indians in Pietermaritzburg and Durban would hunt down black protestors in their communities and shoot at random.

Certainly there is trouble in the so-called ‘Rainbow Nation’.

It seems the Rainbow Nation is what its names says it is; A ‘rainbow’.

It is an optical illusion and its appearance depends on one’s position relative to where the sun is shining.

The idea of South Africa as the ‘rainbow nation’ was coined by Archbishop Desmond Tutu in the early days of democratic South Africa in 1994.

And today, it is clear that this inspirational construct has become a pipe dream for South Africans.

It is clear that what has been done since 1994 was to remove the visible ‘Whites Only’ signs, but the barriers are still there- evidenced by how the majority of black people are still limited to the below standard services that came with apartheid.

The dismissive attitude of ‘get over it’ and ‘it’s been 27 years, move on’ not only downplays the impact of apartheid today, but also glosses over the scars left behind by its policies and effects of its social engineering.

While the late former President Nelson Mandela’s forgiving spirit and approach was noble, that is not where it was meant to stop.

Neither was the Truth and Reconciliation Commission process overseen by Archbishop Emeritus Desmond Tutu.

The South African Government needs to do more to address the widening inequality, rampant unemployment and deliver on the promises of development for all and not just a few.

It needs to address the country’s skewed economic ownership patterns.

It is time to confront the truth.

South African leadership cannot ignore the truth that for as long as the legacies of apartheid and colonialism are treated with kid gloves, the country will continue to foment anger and resentment.

It is time for the majority black South Africans to own and control the economy.

This is a truth that is swept under rugs, because the South African leadership appears not to want to both hear and accept it.

However, until this truth is confronted, people will continue to be shocked and appalled by manifestations of racial inequalities that lurk below the surface of this precious ‘Azania’.

Patience Rusare is a Rotary Peace Fellow at Makerere University and an Institute for Economics and Peace Ambassador.