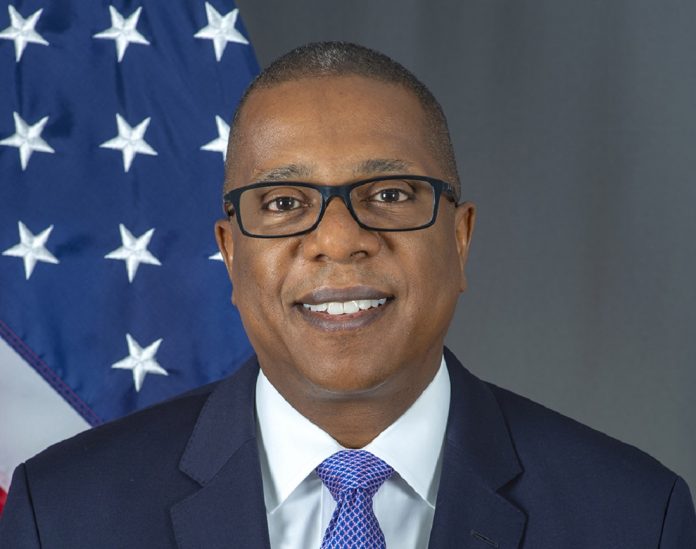 Ambassador Brian Nichols and other diplomats who continuously poke their noses into the country’s internal affairs that Zimbabwe is a sovereign state, he was putting across a message that should now be accompanied with action.

This is because since the inception of the Land Reform and Resettlement Programme in 2000, the message has been put mildly.

The stern message to Nichols and Western diplomats should now be that Zimbabwe has had enough of their antics and the time has come for them to respect the country’s sovereignty.

Equally pervasive is the fact that Zimbabwe now needs to seriously reconsider the reengagement drive, which has disappointingly been a one-sided affair.

Zimbabwe should cease to reengage countries that have openly shown that they are not willing to work with it and are in fact sponsoring anarchy as is the case with their support for violent demonstrations in the country.

Since 2000, successive US diplomats have been at the forefront of sponsoring anarchy in the country with the aim of achieving regime change through illegal means.

Most of them, including Nichols, have been acting as commissars of the opposition, providing funding for violent demonstrations, training opposition activists to foment anarchy in the country.

Nichols has not denied providing US$300 000 for the violent demonstrations that are scheduled to take place today.

Said Chinamasa: “We remind the US Ambassador Mr Nichols and his coterie of gangsters that it is high time they get to know that Zimbabwe is a sovereign republic and a full State under the Montevideo Convention.

If he continues to engage in acts undermining this Republic, mobilising and funding disturbances, coordinating violence and training insurgency, our leadership will not hesitate to give him marching orders. Diplomats should not behave like thugs.”

And herein lies the problem we have had as a country with US diplomats and officials, especially their incessant meddling with our affairs which is premised on their resentment of ZANU PF’s economic empowerment programmes and initiatives.

US diplomats and officials have been under strict instructions to deny that they are promoting destabilisation in the country.

They studiously deny responsibility of the chaos they have caused in the country.

For instance, since the imposition of sanctions against Zimbabwe by Barak Obama’s predecessor, George W. Bush, on December 21 2001, when he signed the so-called Zimbabwe Democracy and Economic Recovery Bill (ZDERA) into law, the US has denied that the sanctions were hurting ordinary people and that the embargo was meant to remove ZANU PF from power.

Instead, Uncle Sam has maintained that the embargo is ‘targeted’ at ZANU PF senior officials.

But the sanctions lie no longer holds water if the brazen interference by Nichols and other US officials is anything to go by.

Prior to the imposition of sanctions, Harare had been ‘warned’ by former US Assistant Secretary for African Affairs, Chester Crocker, through his infamous ‘making the economy scream’ that the gloves were off.

“To separate the Zimbabwe people from that man Robert Mugabe and ZANU PF, we are going to have to make their economy scream, and I hope you Senators have the stomach for what you have to do,” said Crocker calling for the annihilation of the Zimbabwe.

ZDERA itself is clear on what the US intends to do with Zimbabwe, which is destroying its economy until whites are

given their ‘land’ back.

Section 5 of ZDERA daringly demands a return to the land reform formulae proposed by Western donors that included the US itself.

It authorises the US President to: “Support equitable, legal and transparent mechanisms of land reforms in Zimbabwe, including payment of costs related to the acquisition of land and the resettlement of individuals, constituent with International Donors Conference on Land Reform and Resettlement in Zimbabwe, in September 1998, or any subsequent agreements relating thereto.”

That will never happen.

In 2002 the US admitted that ‘it wants (ed) to see President Robert Mugabe (and ZANU PF) removed from power and that it is (was) working with the Zimbabwean opposition… trade unions, pro-democracy groups and human rights organisations… to bring about a change of administration’.

What was curious was that while the International Center for Non-violent Conflict and Freedom House, both then headed by Peter Ackerman, member of the US ruling class Council on Foreign Relations, a New York investment banker and former right hand man to Michael Milken of the ‘junk bond fame’, was lavishing money and training on civil society groups in Zimbabwe out of ‘humanitarian concern’, the opposite was true.

They kept on denying that they were pushing for regime change in the country and today they still do.

They are now coming up with the supposed ‘new’ idea of what they call a National Transitional Authority (NTA) to replace the current leadership.

This plan was mooted in 2004 and failed dismally.

The idea was to remove President Mugabe from power because, according to them, his ‘time has come and gone’ as former US Secretary of State, Collin Powell, said in his July 4 2004 presentation, and replacing him with a pliant ZANU PF/MDC transitional authority, which could be relied upon to reverse land reforms and safeguard Western interests in Zimbabwe.

Equally revealing were the comments made by Powell that:

“And we (Bush administration) will continue to assist directly, in many different ways, the brave men and women of Zimbabwe who are resisting tyranny. If that happens (regime change), the United States would be quick to pledge generous funding to the restoration of Zimbabwe’s political and economic institutions (which have been destroyed by the sanctions). Other donors (those Western countries that have imposed sanctions against Zimbabwe), I am sure, would be close behind (in restoring a Zimbabwe devastated by sanctions). Reading this, Robert Mugabe and his cohorts may cry, ‘Blackmail’. We should ignore them. Their time has come and gone.”

In January 2005, former US Secretary of State labelled Zimbabwe among the six countries she said were outposts of tyranny ‘that needed the US’ help to bring freedom’.

Interestingly, Rice was fielding questions from the US Senate where she was campaigning to land the influential Secretary of State post.

In March 2020, US Assistant Secretary Bureau of Democracy, Human Rights and Labour Robert Destro said his country was working with opposition forces to effect regime change in the country.

“No, sanctioning is not enough, at the end of the day, responsibility to police the boundaries of human rights rests with the Zimbabwean people themselves and we respect their sovereignty,” Destro said.

“Our job is to call the situation as we see it.”

O’Brien appeared on ABC news channel where he was asked to respond to a tweet by Marco Rubio, the acting chairman of the US Senate Intelligence Committee, which had raised concern over ‘heavy social media activity’ by Zimbabwe, China and Russia.

Zimbabwe was threatened with war.

“Senator Rubio is right, and I’ve seen a number of tweets from the Chinese today that are taking pleasure and solace in what they are seeing here. I want to tell our foreign adversaries, whether it’s a Zimbabwe or a China, that the difference between us and you is that, that officer who killed George Floyd, he’ll be investigated, prosecuted, and he’ll receive a fair trial’,” O’Brien said.

“Rubio is 100 percent right that our foreign adversaries are going to try to sow discord, and we’re not going to let that happen.”

And then came the threat, a declaration of war by O’Brien.

“There’ll be a response and it’ll be proportional, but this is not something that our adversaries are going to get away with for free,” he said.

The madness has been legendary.

“Robert Mugabe has survived for so long because he is cleverer … than any other politician in Zimbabwe. To give the devil his due, he is a brilliant tactician,” said Dell.

Interestingly, at the Africa University in Mutare, in November 2005, Dell blamed President Mugabe and ZANU PF for pursuing what he said was ‘voodoo economics’ in place of ‘economic orthodoxy’ to which he saw no other substitute.

In November 2012, the US Embassy Public Affairs Section held a presentation where a collection of articles authored by former American Ambassador to Harare, Charles Ray, were translated to Shona.

Then came the US Embassy project which to all intents and purposes has created the much-needed cushion to hide the hypocrisy that Uncle Sam resents Harare.

According to Noam Chomsky in an article published by The Economist on November 19 1994: “There were no passionate calls for a military strike after Saddam’s gassing of Kurds at Halabja in March 1988; on the contrary, the US and UK extended their strong support for the mass murderer, then, also ‘our kind of guy.”

When all is said done, one inescapable fact is that the US is Zimbabwe’s enemy and the time for them to be shown the exit door has come.

We have had enough of their nonsense.