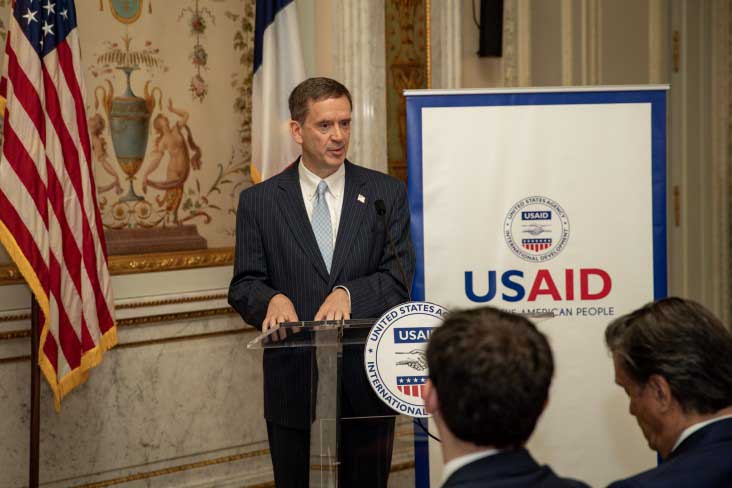 THERE was nothing unusual about reports that the United States Agency for International Development (USAID) has withdrawn funding to four Civic Society Organisations (CSOs) over gross abuse of funds, while the Dutch Embassy in Harare has announced a grant to those who are supporting human rights ‘work’ in Zimbabwe.

The reality of the matter is that the West is consolidating its regime change activities ahead of the 2023 elections.

CSOs, including  the Counselling Service Unit (CSU), Zimbabwe Human Rights (ZimRights), the Election Resource Centre (ERC) and the Zimbabwe Support Election Network (ZESN), purport to be engaged in governance issues in the country.

But damning exposures of these entities’ activities by this publication in the past have indicated that they are, in fact, conduits of Western countries, in particular the US, which are pursuing illegal regime change in Zimbabwe.

This publication has also previously exposed how leaders of these organisations have looted funds from their imprudent donors.

And the latest reports of looting of funds help unravel the brazen attempts by the West to destabilise the country in the run-up to, and during, the 2023 harmonised elections.

And the West never learns!

Having poured huge amounts of money into the permeable hands of their cohorts since 2000, and which money was duly looted, the West has yet to grasp the significant lesson that theirs is a lost cause and that their activists are criminals who should be incarcerated.

Zimbabweans have long resisted illegal regime change and have, instead, focused on nation building as seen by the significant strides in the ongoing development projects as well the recent successes in the agriculture and mining sectors.

Added to that is the resounding success in the COVID-19 vaccination programme that has won plaudits from as far as Australia and the rest of the progressive world.

Secondly, there is little doubt that the peace and tranquillity being enjoyed in the country is indicative of the futility of the regime change agenda.

They want a prosperous economy.

And the results are there for all to see.

Last week, Germany airline Lufthansa announced that it would resume flights to Zimbabwe in March 2022 for the first time since 1998.

On Monday, another giant airline Qatar Airways announced that it would be adding Zimbabwe to its hefty schedule from August 6 2021.

This is the first time that the renowned airline will spread its wings to Zimbabwe.

Qatar Airways has already begun advertising for jobs in Zimbabwe, including a country manager.

“With a total of 30 tonnes of cargo capacity on the aircraft per flight, Qatar Airways will play a key role in facilitating key exports from Zambia and Zimbabwe,” the airline said in statement early this week.

These developments have been necessitated by the peace in the country as well as its successful vaccination programme that has seen Zimbabwe becoming a health tourist destination of choice.

Such stories should ordinarily not share the same space with the nonsense that is incessantly effused by the West, but the country needs to be protected at all costs and as such we dedicate some space to the USAID saga.

Having realised that their money was looted by their ‘activists’, USAID now wants to ‘replace’ the looters with other leaky hands.

Curiously, and for all their noise about transparency, USAID has not made, and is not going to make, efforts to get the accused arrested.

They will, instead, shield them from prosecution as was the case with previous looted funds.

“However, noticing the importance of these organisations in the regime change scheme in the country, the USAID reportedly gave several conditions to the affected CSOs to be met before they are considered again for funding,” reads the looting report in part.

USAID reportedly told these CSOs that they should change their leaders who were implicated in the abuse of funds in an audit and replace them with ‘clean’ leaders who had no record of financial abuse.

According to an impeccable source, former ZimRights national director Okay Machisa was replaced by Dzikamai Bere, the current co-ordinator of the National Transitional Justice Working Group (NTJWG), while ERC executive director Tawanda Chimhini is to be removed and replaced by current ERC programme manager Solomon Bobosibuli.

ZESN director Rindai Chipfunde Vava is also to be replaced by executive director of the Deaf Zimbabwe Trust, Barbara Nyangairi.

The report goes on, unravelling crucial information on the roles played by these organisations in destabilising the country.

The USAID is reportedly working with Zimbabwe Human Rights NGO Forum whose leader Musa Kika has reportedly become the darling of the US.

It is reported that the US funded Kika’s court application that sought to challenge the extension of Chief Justice Luke Malaba’s tenure.

While the USAID was battling to douse the inferno that has risen from its treacherous house, Zimbabwe was receiving rare approbation from another US entity, the United States Department of Agriculture (USDA), which reluctantly acknowledged that the country is indeed destined for a bumper harvest of 2, 8 million metric tonnes of maize.

That, however, did little to cull the Dutch’s appetite for regime change in the country.

“Does your organisation work to promote and protect human rights in Zimbabwe? Do you have innovative ideas that you believe can stimulate lasting change? The Human Rights Innovation Fund might be for you,” reads a notice on the embassy’s website.

“The Embassy invites applications for projects explicitly focusing on:

The HRF supports civil society organizations around the world that are actively engaging in the promotion and defence of fundamental human rights and freedoms. The Human Rights Innovation Fund is intended to spark new ideas in human rights programming. Its purpose is to reach small organisations working towards promoting, protecting and defending human rights using creative and innovative ways.”

While the country is enjoying the numerous successes in the various sectors of the economy, everyone should be wary of the not so hidden machinations of the enemy.