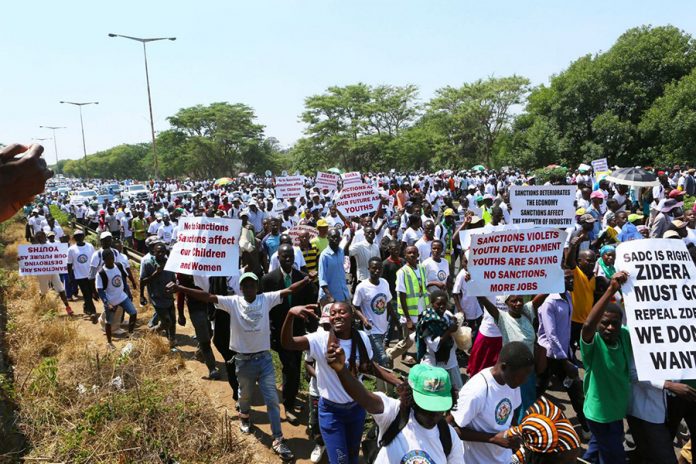 US President-elect Joe Biden once made reference to a 1986 political speech in which he furiously condemned the apartheid regime in South Africa and criticised the US government for failing to call the Boer government to order in light of gross injustices perpetrated against the black majority.

Could Joe Biden still harbour these strong sentiments of justice for black people?

Could the choice of a black woman as his vice-president also reflect ’left-leaning’ tendencies in Biden?

We rested the case by noting that US political actions are largely dictated by economic self-interest.

What would America gain by removing sanctions on Zimbabwe?

What Africans think does not bother them.

If anything, they want to dictate and sequester all the natural resources in black African countries.

Would America not be seen as showing weakness as leader of the West if it lifted sanctions on Zimbabwe?

Which brings us to the bone of contention between the West and Zimbabwe.

Zimbabwe’s crime is the bold act of repossessing its God-given geographical space which lies between the Zambezi and the Limpopo rivers.

After a long protracted guerilla war lasting 15 years, the black guerilla fighters with solid backing from mostly the rural masses, defeated the armed forces of the colonial government, leading to the Lancaster House Agreement where the white colonisers agreed to hand over power to a black government.

Was this viewed as a defeat of white power around the globe?

The reader must take note that the spectacle of white colonialists being defeated and dispossessed of land they had acquired by force of arms was unpalatable to the British and their fellow Anglo-Saxon tribesmen already in control of their native Britain and the colonies named United States of America, Canada, New Zealand and Australia.

The latter colonies, together with Western Europe, make up what is generally referred to as ‘Western’ countries or just the West.

In all their colonies, the British always invited other Europeans to boost their numbers and create a majority.

It is the same with sanctions on Zimbabwe!

The creation of ‘Western’ countries beyond European shores was achieved by force of arms. The original natives of what we now call the USA were hunted on foot and on horseback like wild animals and virtually exterminated.

For example, the Cherokee Indians, the original natives of present-day North Carolina in the USA, were forced to migrate into the desert mid-west in the middle of winter.

Most of them died of cold and hunger.

The route they followed is now a historical monument referred to as ‘The Trail of Tears’.

Their ancestral lands are now permanently occupied by European settlers.

Today their small remnants live in what are called Indian Reservations separated and not part of mainstream America.

The black Aborigine peoples of Australia and the Maori of New Zealand suffered a similar fate. In Australia, Aboriginal children were forcibly separated from their parents to be fostered, adopted or otherwise Anglicized culturally.

The strategy was and continues to be that of exterminating all vestiges of the Aboriginal people and culture.

All the countries that were invaded and taken over by European colonisers are richly endowed with natural resources: minerals, forests, water, wildlife and good climates.

Zimbabwe too is extremely rich in natural resources with arguably the highest per capita resource endowment on planet Earth.

It is therefore a targeted country.

To those coveting Zimbabwe’s rich natural resources, including the former colonisers, it is desirable to install by hook or crook a pliant government in Harare that will provide them with easy access to the mineral and other resources.

Spirited sponsorship of opposition parties wholly funded from the West is part of efforts drive out liberation governments replacing them with neo-colonial stooges.

And that brings us to the question of possible lifting of economic sanctions against Zimbabwe by a Biden administration in Washington.

It is important for all Zimbabweans and indeed other Africans to understand that all the European countries (the European Union) plus governments of overseas territories that they seized from their natives owners such as USA, Canada, Australia and New Zealand, all are united in imposing sanctions on poor little Zimbabwe. What is the basis of their solidarity?

There is no prize for guessing why white-ruled Western countries are imposing punitive sanctions on Zimbabwe.

They are expressing solidarity as a white race.

They all feel that a black man cannot be allowed to get away with such ‘impunity’ as to dispossess a white government and its people of a rich piece of real estate.

The salt in the wound, loads of it, came with the near-wholesale repossession of previously white –owned farms.

The Western countries sat down and agreed that Zimbabwe must be taught a lesson: never to challenge and repossess land (and minerals) that Westerners acquired by force of arms!

All other countries in similar colonial land situations such as Namibia and South Africa are being put on notice by the West!

Do not follow the Zimbabwe route; you will be severely punished. But do the Africans have a choice?

The sanctions are certainly targeted; not at a few individuals or ZANU-PF politicians! No!

Sanctions are targeted at every Zimbabwean man, woman and child.

If you make fire under a roasting pan, all the maize pips in the pan will feel the heat!

The sell-out Zimbabweans who have aided and abetted and even applauded the sanctions fail to appreciate that it is their own kith and kin, ordinary Zimbabweans, who are being collectively punished! It must in Roman-Dutch law that one gets punished for fighting to recover own property.

So where will Joe Biden stand while the white governments in the West exact vengeance on the black people of Zimbabwe for the crime recovering their stolen land?

Will he make a principled stand against racist injustice without regard to skin colour?

Or will he put more firewood in the fireplace to accelerate the demise of Zimbabwe’s economy?

It took me hours to peruse and read some of its various provisions.

Zimbabweans must understand that to all intents and purposes the United States of America declared war on Zimbabwe through that sanctions law.

The law directly and indirectly threatens heavy punishment on all whose actions may be interpreted to be breaking it.

All the calls for reforms are hollow!

The West wants Zimbabwe to reverse, under duress, the political and economic gains of the country’s independence.

That will never happen!

Sanctions or no sanctions, Zimbabwe must chart its own development path.