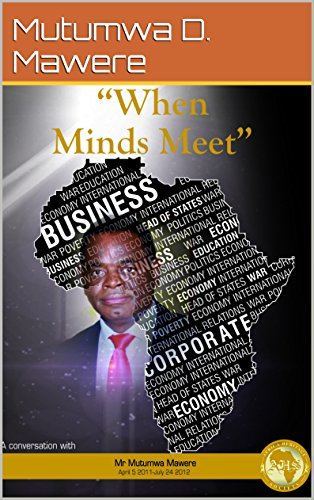 APRIL is independence month as Zimbabweans commemorate the sacrifice and efforts of gallant sons and daughters of the nation which birthed a free Zimbabwe.

The bold move by locals to take up arms and fight the colonial Ian Smith regime was inspired by fellow Africans who had stood up against colonialists and freed their countries.

The heroic acts by Africans, in their quest for an independent continent, are discussed in the book ‘When Minds Meet’, penned by Mutumwa Mawere.

The writer credits freedom fighters for their role in liberation struggles that gave birth to a free Africa.

He marvels at how they took on the seemingly powerful colonialists and defeated them.

Indeed, freedom fighters were not going to let anything stand in their way as they were irked by how whites were ill-treating them.

Africans had been reduced to second class citizens; denied the right to own land, business ventures and accesss to basic standards of living.

Africans had to defend their birthright, so they took up arms to topple colonial governments.

“During the colonial era, many native Africans were prepared to pay the ultimate price to make their own countries free,” writes Mawere.

“Indeed, they were prepared to go down standing up for the values of freedom, equity, justice and democracy.

No force or propaganda could stand in the way of a people determined to create a better society founded on universally acceptable principles and values.

To the extent that we can now count 54 African states that now define what the world knows as Africa, we must congratulate the few men and women who made it possible.”

Having won their independence, Mawere suggests Africas should take advantage of their relationship to cultivate and rebuild the continent.

“As we reflect on the last 54 years of independence and the role of Africa in the New World Order, we are compelled to pause and ask fundamental questions regarding the place and standing of persons of African ancestry in the global family of nations,” writes Mawere.

“Africa is home to the majority of black people and to the extent that persons of African ancestry are located in other jurisdictions outside the continent of Africa, there is merit in investing in the building of knowledge about the relationship between blacks and business as well as understanding the origins of the stereotypes that have been used to describe black persons.”

In order for the whiteman to subdue the blackman, false theories labelling blacks as inferior were peddled.

Mawere points out how religion and science were manipulated to suit the whiteman’s agenda of discrediting blacks.

When colonialists came to Africa, one of the first major assignments was selling Christianity as the preferred religion of choice and, in the process, advocating doing away with African Traditional Religion (ATR).

It was through various religious teachings that made Africans docile and ready to give up their birthright to suit the needs of the whiteman.

By destroying the ATR whites knew they would had broken the link uniting African societies as well as their values and principles.

“Religion was reinvented to locate blacks outside mainstream churches and scientists were put to work to undertake researches to confirm that blacks were genetically inferior,” writes Mawere.

Mawere calls upon Africans to move past the ills of colonialism and use the victories recorded in liberation struggles to build a strong continent.

He suggests Africa’s future lies in the hands of her children and, as such, it was the duty of every African to play a part in developing it.

“Africa’s future does not only belongs to the state and its actors, but it is, and must be, the business of its people,” writes Mawere.

At a time when the economic outlook of Africa is promising, it is natural that questions are asked as to what kind of future is desirable, sustainable and obtainable.”