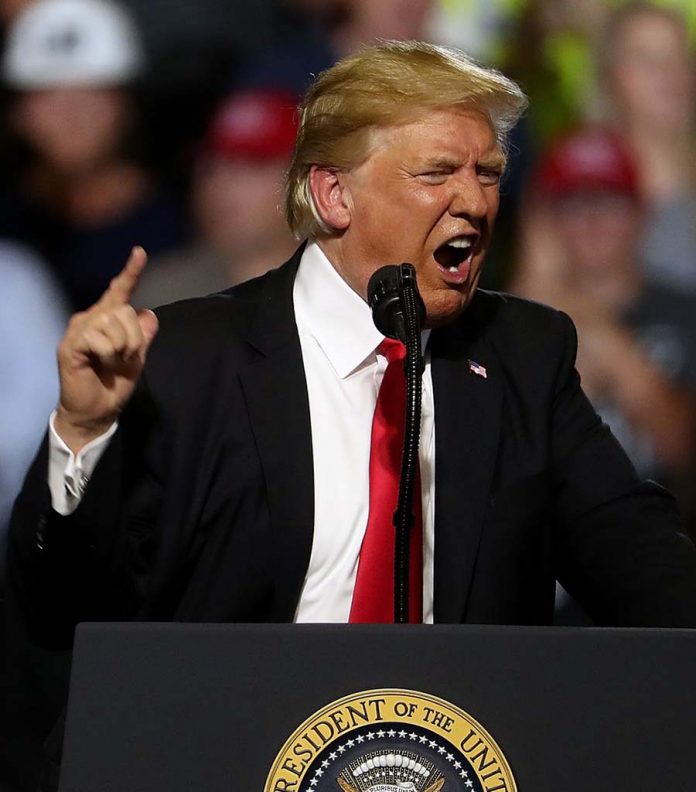 VOTERS in America will decide on November 3 whether President Donald Trump remains in the White House for another four years or not.

The former US Vice-President Joe Biden, the Democratic Party’s nominee, who was Barack Obama’s Vice-Fresident and has been in US politics since the 1970s, is polling narrowly ahead of incumbent Republican President Donald Trump in key battleground states.

Biden has been ahead of Trump in most opinion polls since the start of the year.

He has hovered around 50 percent in recent months and has had a 10-point lead on occasions.

October 11 records show that Bidden had a 53 percent lead over Trump at 42 percent.

For the larger part of September and August, Biden was around 50 or 51 percent while Trump was on 42 or 43 percent.

According to www.realclearpolitics.com, Bidden is leading in Michigan, Pennsyvania and Winconsin, where Trump won by razor-thin margins in 2016, Polls show Biden leading by six points.

North Carolina and Georgia have each voted Republican in nine out of the last 10 presidential elections, but appear to be closely contested this year.

Other toss-up states include Arizona, a state only one Democratic presidential candidate has won in the past 70 years, and Texas, where Trump’s polling advantage has remained below five percentage points for much of the summer.

Biden holds a substantial lead among Latino voters, a growing demographic in swing states like Arizona and Florida, but some polls suggest that he is less popular with Latino voters than either Barack Obama in 2012 or Hillary Clinton in 2016.

According to the New York Times and Siena College, Biden is ahead by seven points in Pennsylvania and five points in Florida.

Although they do not necessarily predict the result of the election, national polls are a good guide to how popular a candidate is across the country.

Hillary Clinton led in the polls and won nearly three million more votes than Trump, but she still lost in 2016.

By contrast, 2016 polls were far less clear and just a couple of percentage points separated Trump and his then-rival Hillary Clinton.

Whites who helped propel Trump to victory in 2016 have shown signs of disapproval towards the President’s handling of the COVID-19 pandemic.

An NBC News/Wall Street Journal national poll conducted after the September 29 debate  found Biden on 53 percent and his rival on 39 percent — a gap six points wider than in their previous poll two weeks earlier.

Not every pollster has shown an uptick for Biden since Trump’s COVID-19 diagnosis, but Biden still got some of his best polls this week and he now has a double-digit lead over Trump, nationally.

These opinion polls are reflective of the underlying issues that could decide the US 2020 elections.

One of the problem is COVID-19, which makes it difficult to run elections but could also be an anaemia for the incumbent.

Trump’s positive coronavirus test, announced by him in the early hours of October 2 , put  back under the spotlight his weaknesses in  response to the pandemic, which has claimed the lives of more than 200 000 people in the US.

The coronavirus has realigned voters’ concerns and behaviour because there are groups that feel Trump should have been more serious in his response to COVID-19.

According to data from an ABC News/Ipsos poll, 72 percent of respondents in a survey revealed that Trump did not take the “…risk of contracting the virus seriously enough,” while the same number said he failed to take “…the appropriate precautions when it came to his personal health.”

Many feel Trump could have avoided contracting the disease altogether if he had practised greater physical distancing and worn a face mask.

Another problem in US elections is that with the death of Supreme Court Justice Ruth Bader Ginsburg, Republicans are now scrambling to confirm President Trump’s nominee, Amy Coney Barrett, before the election.

Confirmation of Barret means strategically placing a person who will possibly effect presence of 6-3 conservative majority on the court if the 2000 scenario of Bush-Al Gore plays out again as is predicted.

One could say Trump is masterminding and pushing the confirmation for personal election benefit.

Public opinion shows that many Americans think the winner of the 2020 election should appoint Ginsburg’s replacement.

Trump suggested that the Supreme Court would determine the outcome of the election after his nominee is potentially seated.

If there are any disputes beyond the election day, the Supreme Court may intervene in the event of a dispute, yet the US spews allegations of captured courts in Africa.

Another problem is that Trump challenges the validity of mail-in ballots and has persuaded state legislatures to overrule them.

Trump is not ready to step down from power.

He argues that “…there wont be a transfer of power, frankly there wont be a continuation” and he has repeated the words during  his first debate with Joe Biden: “This is going to be a fraud like you’ve never seen.”

Trump’s rhetoric, his campaign and the Republicans at state and local level make it more difficult for voters to cast a ballot, more difficult for states to count votes and more likely that tallies will be challenged in the courts.

Another flaw is that Trump has been claiming for months now that the influx of mail-in ballots as a result of the COVID-19 pandemic are ripe for fraud, and last week he suggested that the results of the election may never be accurately determined.

Pollsters did have some problems in 2016 — notably a failure to properly represent voters.

And following 2016 pollster problem, many Americans, including supporters of Biden, are apt to mistrust the polls, especially at the state level.

But Biden has said he will accept the results once all the votes are counted.

“Sure, the full results. Count every vote,” he told CNN’s Anderson Cooper at an outdoor town hall.

Republicans say that the legal positions they are taking to stop efforts to expand mail-in voting are intended to safeguard existing election laws from being changed so close to election day.

Democrats argue that access to voting needs to be expanded due to the pandemic and they say they’re pushing back against efforts to suppress the vote.

There are also lawsuits across the country dealing with voting access issues, covering everything from mail-in ballots to drop-boxes to how voters can fix absentee ballots that are missing information. Those cases are a prelude to potential legal challenges after election day.

North Carolina Lt Gov Daniel Forest, a Republican, sent a letter to Attorney General William Barr last week asking for the Department of Justice to investigate issues related to potential fraud in the run-up to the elections.

In Pennsylvania, the Justice Department also announced that it was investigating issues with a small number of mail-in ballots.

US Attorney David Freed said the inquiry found that nine ‘military ballots were discarded’ and, in an unusual disclosure, said that ‘all nine ballots were cast for presidential candidate Donald Trump’.

But several hours later, the press release was taken down and then re-posted to correct that, in fact, only seven of the nine ballots had been cast for Trump. The other two were unknown.

In Michigan, the Republican-controlled legislature still has not allowed local officials to process absentee ballots before election day.

The State Senate passed a bill that gives officials one extra day, but the legislation is stalled in the State House.

And the Iowa Secretary of State, Republican Paul Pate, is seeking emergency authority to have additional time to process ballots.

One of Democrats’ nightmare scenarios is that the election night results show Trump ahead, and when his lead evaporates as mail-in votes are counted, he claims it’s a rigged election.

Trump has urged his supporters on Twitter to be poll watchers, which experts warn could lead to intimidation or even conflict on election day.