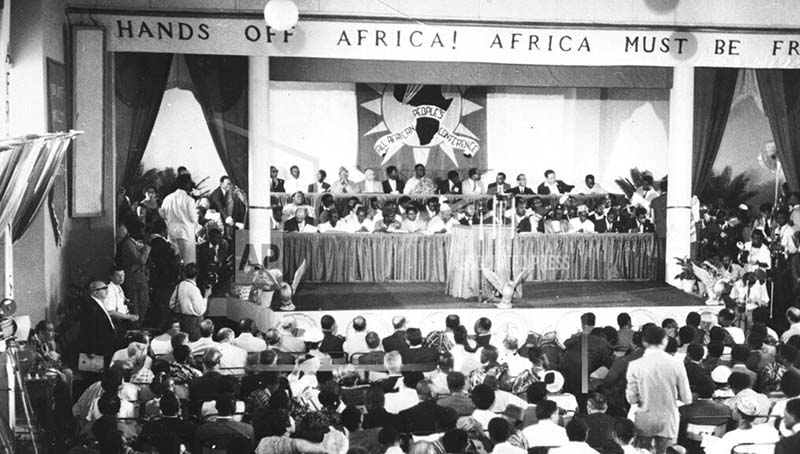 IT is fortuitous for the African continent that Culture Week and Africa Day take place during the same month.

Africa Day is celebrated since the All Africa Conference was held in Accra, Ghana, in 1958.

Then it was conceived as African Freedom Day.

This was at a time when most African countries were still struggling against colonial rule.

In May 1963, for the first time in African history, the Organisation of African Unity (OAU) was formed to give African leaders a united voice.

And May 25 continues to be commemorated as Africa Day, not only in respect to the formation of the OAU and African Unity, but also to celebrate Africa’s creative forces.

Africa Day celebrations should encompass a symbiotic matrix of art, culture, heritage and Africa’s rediscovery of the ‘self’, our creative worth and potential to bolster the ‘Africa rising’ maxim.

Africa, the once plundered continent, has much artistic and cultural reclaiming, re-invention and realigning to do to realise its full social, cultural and economic potential.

But, while brimming with culture, creativity, colour, invention and potential wealth, its global appeal has to be publicly acknowledged and engineered to re-empower its citizenry.

African empires, built entirely by African people, from the Egyptian pyramids to Timbuktu, Mapungubwe and Great Zimbabwe, were plundered and stripped of cultural provenance.

For emerging economies, such as Zimbabwe, the detritus of our history, the vestiges of our self-identity and our global cultural footprint need to be redressed, reconstituted and reawakened systematically and coherently for the benefit of the nation.

A nation’s memory and wisdom reside in its traditional cultures.

Needless to say, apart from superficial pontifications or wearing dashiki or chitenge to symbolise the ‘cosmetic’ commemorations of Africa Day, beneath the surface remain critical unresolved cultural issues.

One of the greatest stumbling blocks is the general perception of our culture as being ‘backward’ or ‘technologically redundant’, or worse still, ‘irrelevant to our contemporary times’.

Africa ought to redress this perception.

African art and culture are dynamic, intangible entities that manifest in our tangible cultural productions from auditory to performance, visual arts, architecture and the gamut of material culture which should be seen as a broader part of the national development trajectory.

Since the early 2000s, I have often reiterated on the importance of our African culture and heritage, and the need to bolster the ‘creative economy’ pedagogically, intellectually and financially for domestic patronage.

But, to bolster our creative industries, we need to understand the concept and mechanisms of the ‘creative economy’.

The arts and culture industries should be premised on talented and gifted individuals — vane humhizha.

These usually amount to perhaps two or three out of 10 individuals – 20-30 percent of a population.

Yet, the impact of all cultural production extends beyond local appreciation to global recognition.

In its heyday of artistic recognition, talented Zimbabwean artists were breaking colonial barriers of cultural exclusion with their powerful artworks in hallowed museums and prestigious art galleries around the world.

These Zimbabwean artists, with no local patronage, financial support or recognition, single-handedly propelled Zimbabwe into the international limelight in the 1980s-1990s.

The artworks of that period were described by some as ‘the spiritual resonance of a deeply mystical experience’.

Others, negative Western critics, described it as ‘an innovative strategy for commodity production’.

But who are they to appoint themselves lords over our cultural production when they have no understanding of indigenous ways and deeply held religious beliefs, let alone our languages?

Regrettably, only a handful of these visual artists are known or acknowledged in Zimbabwe.

Today, the visual artists find themselves financially constrained, with no capital, no local markets or patronage, no materials, tools or equipment, no benefits and no Government subsidies.

It is generally held that ‘an army is as good as its generals and strategists’.

Therefore, if the authorities in the arts and culture sectors are uninformed or lack administrative dynamics and cultural wisdom or knowledge, we will surely fail to realise our potential to create a sustainable creative economy in Zimbabwe.

Culture is an important aspect of a people’s identity, not to be taken lightly.

Art is one of the highest forms of expression of culture and trigger for human development.

The culture is us, it belongs to us.

But do we own or benefit from our culture?

Already, since the 1980s, the arts, humanities and archeo-aesthetics of Zimbabwean traditional material culture and contemporary art had been the subjects of Western discourse in Western academic circles such as Upsala University in Sweden, University of Washington, the Smithsonian, the Sorbonne in Paris, Iowa University, Sussex University and SOAS University of London.

Today, these institutions inopportunely own our cultural discourse, particularly the visual arts of Zimbabwe.

A greater concern in pan-African artistic circles is that ‘African governments have failed to recognise, capitalise and exploit the visual arts as a holistic, integral component of socio-economic development.  The goodwill inherent in the promotion of contemporary African art should be seen as a diplomatic vehicle to counter negative perceptions of Africa as a continent of strife, conflict, disease, malnutrition, under-development and poor governance’ to one of ‘innovation, creativity, scientific and technical progress with civic and artistic pride’.

For too long, African cultural pride has been immersed in a dark cauldron of poverty and pestilence and unresolved tribal conflicts.

It is only through the production and promotion of art and culture that the current negative perceptions and image of Africa can be befittingly redeemed.

Regrettably, African arguments, cultural discourse and conversations around post-colonial cultural reclamation, custodial ownership, administration and promotion of African art are not at the fore of national or development budgets of most African countries.

In 2002, I wrote in the foreword of  an art exhibition catalogue Afrikan Affinities II, held at Springstone Art Gallery in Avondale: “The ultimate concern and motivation for the development and astute administration of the visual arts and cultural industry should not only be premised on cultural tourism for the benefit of foreign patrons and foreign scholars, but should benefit the Zimbabwean citizenry, the children and the purveyors of the culture.”

African culture should not only be perceived primarily as a means to financial gain, but as a means to harness and conserve our indigenous cultural knowledge for self-empowerment to improve our lives socially, morally, technically and practically in the current global cultural-economic matrix.

Our African culture is unique.

It is tangible and enduring.

Beyond education and the matrix of tourism, the presentation and preservation of our material culture, our artistic, architectural and movable objects and heritage should be viewed as national treasures.

To quote a paper by Paul Gilroy titled Culture and Resistance (Black Phoenix -1991), a fellow scholar as well as art and cultural studies lecturer at Sussex University: “The problematic intellectual heritage of Euro-American modernity still determines the manner in which African nationality is understood within black political discourse. It is an identity premised on a ‘racial’ self, socialized by Western perceptions of their supposed superiority…. Over indigenous people.  Africa needs a more refined language for dealing with crucial issues of identity, kinship and cultural affiliations within the continent and African diaspora.”

This can be achieved through art and cultural diplomacy.

Re-engagement requires an all-embracing approach which takes all sectors of the economy into consideration.

Africa is a rich pool of culture, diplomacy and the humanities.

As former Senegalese President Leopold Sédar Senghor, stated: “Culture is at the beginning and the end of development.”

Let us treasure our culture, not only on Africa Day, but at all times.