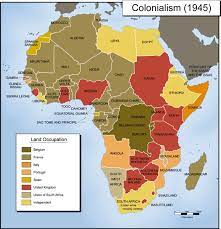 IN the late 19th Century, European imperial powers engaged in a major territorial scramble and, through various incursions, occupied most of Africa, creating many colonial territories; leaving only two fully autonomous states – Ethiopia (known as ‘Abyssinia’) and Liberia.

Although Egypt and Sudan were never formally incorporated into any of the European colonial empires Egypt was effectively under British administration after the British occupation of 1882, until 1922.

Between 1884-1885, in a bid to end Europe’s imperial powers’ scramble for African territories, King Leopold II of Belgium convened the Berlin Conference to settle on a political division of the continent by spheres of interest that still exist in Africa today. These spheres of interest often resulti in instability due to marginalisation of people created by colonial rule.

Since the early 1960s, border and territorial disputes have been common, with the European-imposed borders of many nations being widely contested through armed conflicts.

Following the infamous Berlin Conference and the partitioning of Africa, expeditionary forces, mercenaries and missionaries were sent to sequester African empires, under chartered companies, held and controlled on behalf of their monarchs.

The people were savagely divided and conquered and pitilessly subjected to foreign rule. Foreign religions, languages and way of life were brutally imposed on indigenous African people and their holistic way of life.

Egypt, or the Arab Republic of Egypt, is a republic in north-eastern Africa known as the United Arab Republic until 1971; site of an ancient civilisation that flourished from 2600-30 BC.

Egypt was occupied by the British from 1882 until 1922 when it became an independent kingdom, and a republic in 1953.

British East Africa were the British possessions of Uganda, Kenya, Tanganyika (now Tanzania and Zanzibar), before their independence in the 1960s.

Somalia was the British protectorate of Somaliland, a former region of East Africa which includes the Somali Republic, Djibouti and south-east Ethiopia.

Djibouti, the territory of the Afsa and Issas, in north-eastern Africa on the Somali Peninsula, was formerly under French control until it became independent in 1997.

German East Africa, an apportioned territory consisting of Tanganyika, Ruanda and Urundi (now Tanzania, Rwanda and Burundi), was divided in 1919 between Britain and Belgium.  A territorial division that caused a revolt between the Tutsi and Hutu people in 1959, and the later-day African genocide in the mid-1990s.

Nigeria, the Gambia, Sierra Leone, Ghana and the former trust territories of Togoland and the Cameroons became the possessions of British East Africa.

Togoland, on the western coast of Africa, on the Gulf of Guinea, was initially a former German protectorate, divided in 1922  by the League of Nations’ (UN)  mandate into British Togoland in the west and French Togoland in the east.

The former joined Ghana in 1957 while the later became independent in 1960.

From 1895 to 1960, French West Africa existed as a group of French overseas territories consisting of Senegal, Mauritania, French Sudan, Upper Volta, Niger, French Guinea, the Ivory Coast and Dahomey, known collectively as Francophone West Africa, where it was mandatory to use French as the lingua franca.

French Morocco, a former French protectorate in north-west Africa, united in 1956 with Spanish Morocco and Tangier to form the Kingdom of Morocco, while Algeria and Tunisia, together with French Morocco, comprised French North Africa.

French Guinea, in western Africa on the Atlantic, was a territory of French West Africa which became the independent Republic of Guinea in 1958.

Gabon, a republic on the west coast of Africa, was colonised by the French in 1839 and made part of the French Congo in 1888. Gabon attained its independence in 1960.

In 1471, Portugal reached and colonised the Southern Hemisphere and the islands of the Gulf of Guinea, including Sao Tome and Principe and Elmina on what came to be called the Gold Coast (Ghana today).

In 1575, Portugal colonised Angola, known as Portuguese West Africa, until its independence in 1975.

In north Africa, Spain colonised Spanish Morocco which was part of the Kingdom of Morocco since 1956.

Spanish west Africa was a former territory of Spain, divided in 1958 into the overseas provinces of Ifni and Spanish Sahara in north-west Africa.

The former Spanish colony of Ifni was returned to Morocco in 1969.  Spanish Guinea, a country of west-central Africa, including islands in the Gulf of Guinea, were ceded by Portugal to Spain in 1778.

Kenya, a republic in eastern Africa, became a British protectorate in 1895, and a colony in 1920.

Following the Mau-Mau war, it achieved independence from the United Kingdom in 1963 as a member of the Commonwealth. Uganda was established as a British protectorate in 1894-96.

It gained independence in 1962 and became a republic in 1967 as well as a member of the Commonwealth.

Malawi, a republic in east-central Africa, was established as a British protectorate in 1891, gaining its independence in 1964 as a republic within the Commonwealth.

Zambia also became a republic within the Commonwealth after its independence from Britain in 1964.

Botswana, a landlocked republic in south-central Africa, was established as the British protectorate of Bechuanaland in 1885 as a defence post against the Boers.  It became an independent state within the Commonwealth in 1966.

Damaraland, the original name for Namibia, a republic in south-western Africa on the south Atlantic coast, was named Angra Pequena (Small Port) by the Portuguese, and between 1884-1915 as German South West Africa after its seizure by Germany.  Following the end of the First World War, the League of Nations (UN) placed the territory under a British mandate, with the administration of the territory entrusted to the Government of South Africa, and became known as South West Africa.

From 1915-1988, South West Africa became increasingly integrated with its neighbour until it was regarded as the fifth province of the Union of South Africa.  Namibia, also called Bergdama by the Dutch merchants, finally achieved its independence from South Africa in 1990.

Zimbabwe, formally known as Rhodesia, was a British colony in Southern Africa from 1889 to 1923 when it became a self-governing British colony.

In 1965, Rhodesia declared unilateral independence (UDI) from Britain and proclaimed a republic in 1970.  After a protracted liberation war, Zimbabwe became independent in 1980, as a member of the Commonwealth.

The Commonwealth of Nations is an association of sovereign states that were at some time ruled by Britain and recognise the British sovereign as head of the organisation.

May 24, the anniversary of Queen Victoria’s birth and formally known as Empire Day, is still celebrated as Commonwealth Day in many former colonies.

Pre-colonial communities were never completely isolated; interaction between neighbours across regions and even outside of the continent were common.

Societies interacted with one another through commerce, marriage, migration, diplomacy and warfare.

The fertile land, trade routes and cattle enforced interaction with other communities.  Commerce was instrumental in state formation.  Unlike today, in most African societies, all the people were taken care of – unemployment and homelessness were rare.

Africa has the world’s oldest record of human technological achievement; the oldest stone tools in the world were found in eastern Africa.

Evidence of tool production by hominin ancestors have been found across sub-Saharan Africa.

However, Africa’s history of science and technology has received relatively little attention compared to other regions of the world, despite notable African developments in mathematics, architecture and metallurgy, among other fields.