Home Columns Aquaculture and fisheries in Zimbabwe: Part One 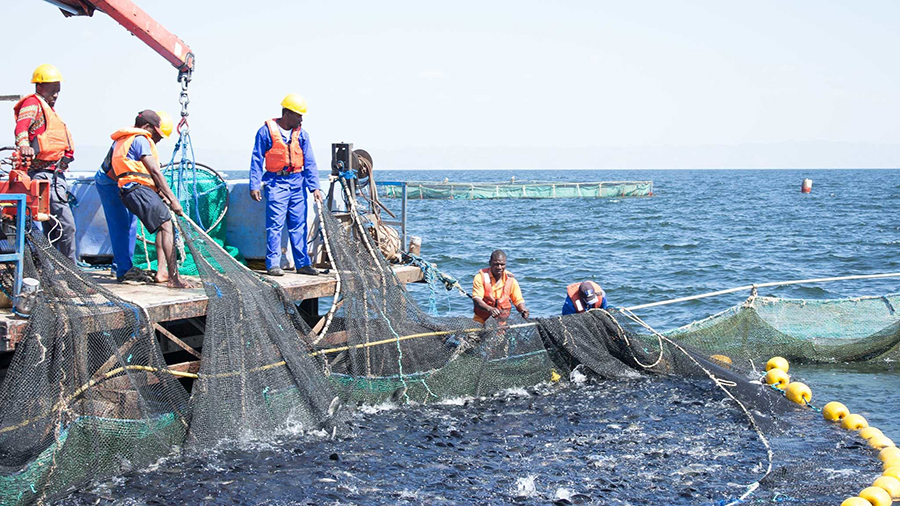 They are grouped into classes, like agnatha— jawless fish; chondrichthyes– sharks, rays as well as chimacras and osteichthyes – bony fish.

About 8 400 species live in fresh water.

The Zambezi River system has some 340 known species, including those of Lake Malawi, ranking it equal to the Nile, and second only to the Congo system.

Africa has a long history of fisheries and the industry has traditionally been based on natural fish stocks. Historically, the first instance of aqua-culture dates back 2 500 years when Egyptians farmed tilapia fish in ponds adjacent to the Nile River.

Although the Nile tilapia, known locally as ‘bream’ (oreochromis niloticus) may have been reared thousands of years ago, today there is little written or recorded tradition of fish culture in most African countries.

Currently, over 26 species of fish are utilised in aquaculture production in Africa, of which tilapia, catfish and the common carp are more predominant.

Molluscs as well as oysters are also bred in the coastal zones.

While fish stocks have been declining over the last decades due to over-harvesting, climate change, variability as well as changes in land use and cover, among other factors, the demand for fish has increased worldwide, leading to increased pressure on fisheries.

Despite being landlocked, Zimbabwe, like many African countries, has the ideal climatic conditions for fresh water fish farming and the potential to develop aquaculture for sustaining livelihoods, especially of the rural majority, food security and economic development through value addition and export of fish and fish products.

Aquaculture or ‘fish farming’ is defined as: “…the breeding, rearing and harvesting of aquatic organisms (both animals and plants) under controlled or semi-controlled conditions while fisheries are defined as natural, often open aquatic ecosystems (known as ‘capture’ fisheries). Both yield produce for subsistence, and hold commercial, recreational and ornamental value ‘‘

According to the Japanese Resource Council, Science and Technology Agency, aquaculture is defined as, “… an industrial process of raising aquatic organisms up to final commercial production within properly partitioned aquatic areas, controlling factors and administering the life history of the organism positively and thus is considered as an independent industry from the fisheries hitherto.”

Though aqua-culture is undertaken in many farming regions in Africa, political and socio-economic constraints, pressure exerted on fisheries due to population expansion and changing climatic conditions has resulted is a small fisheries sector, making a small contribution to food security and economic development.

Examples of declining fisheries in

Africa include those from Lakes Kariba and Malawi in Southern Africa and Tanganyika and Victoria in east Africa.

In addition, depletion of fish stocks due to illegal and unregulated fishing in the coastal zones and oceans surrounding the continent have been recorded.

According to the Africa Development Bank (AfDB), in 2008, nearly 10 million people or 1,5 percent of Africa’s population were directly or indirectly dependent on fish-farming with the continent realising about US$3 billion from exports annually.

Fish from aquaculture contributed 44,1 percent, increasing from 31,1 percent of the total global fish production realised in 2004.

As of 2016, aquaculture was providing half of all the fish consumed by humans.

Although still modest, aqua-culture production in Africa has been steadily growing. Given the good climate, vast land reserves and huge reservoir capacity (60 percent of Southern African waters), Zimbabwe has enormous potential to develop and grow its fisheries and aqua-culture.

However, aqua-culture can be a murky and highly risky monetary venture if one does not consult a veterinary aquarist prior to venturing into fish farming. Valuable time and money can be flushed away with diseased fish and infected spawn. Whilst many Zimbabwean farmers have attempted aquafarming, many have failed due to their ignorance about its profitability and its high-maintenance regimes.

Having attended many aquatic workshops including both river and marine fishery in Puget Sound, Seattle, US; Curitiba in Brazil; Oyster Bay in Dar-es-Salaam, Tanzania; Zeebrugge in Belgium; and Norton, Darwendale, in Zimbabwe,I began to understand how important fish are to the ecosystem, aqua pteridology, human and animal life.

Zimbabwe has one of the largest fish farming operations in Africa, producing over 9 000 tonnes of Nile tilapia per year. The country holds an estimated 60 percent of all dammed water in the SADC region (close to 10 000 dams) and produced over 18 000 tonnes of fish in 2014.

According to the Zimbabwe National Parks and Wildlife Authority: “If all of Zimbabwe’s 41 major reservoirs were fully utilised, there is potential to increase fish production output up to 1,5 million tonnes, supporting 1,2 million people at the primary production level.”

Concerns over the future of fisheries and aqua-culture resources has motivated investment into fish farming as well as the development of policies, especially for poor communities in arid environments as a sustainable livelihood measure and, ultimately, poverty eradication.

As a result, AfDB ventured into fisheries and aqua-culture in Africa in a bid to minimise the threats posed by the over-exploitation of natural fish stocks, support value addition, poverty eradication through job creation and enhancement of sustainable livelihoods. In Zimbabwe, for example, AfDB has supported the largest fish farm, Lake Harvest (AfDB, 2011).

An initiative, in the 1970s, to boost protein production and combat hunger resulted in the global ‘Blue Revolution’ which led to the growth and development of the aquaculture industry.

According to the FAO, 2014: “Compared to capture fisheries which are estimated to have reached their peak and are now recording decreasing production generally, aqua-culture is recognised as the fastest and economically sustainable food producing sector in the world, growing at an annual rate of 10 percent in Africa”

A robust fisheries and aquaculture sector in Zimbabwe would address nine of the UN’s 17 sustainable development goals, namely: no poverty, zero hunger, good health and well-being, clean water and sanitation, industry, innovation and infrastructure, responsible consumption and production, climate action, life below water as well as life on land.

Success in fisheries and aqua-culture will, however, require substantial technical and financial investments, policy interventions and an integrated approach in order to achieve food security and nutrition, particularly in the agro-based economy of Zimbabwe. Does Zimbabwe have the capacity for it?