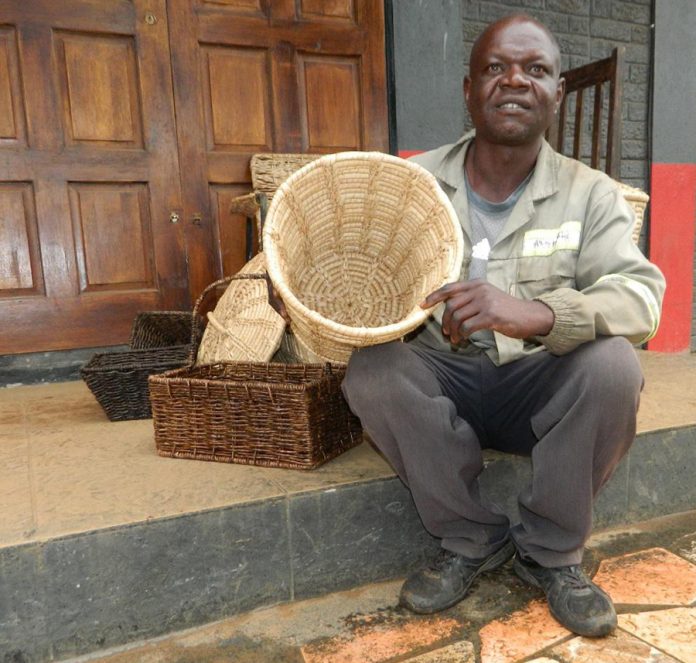 THE various domestic-woven reed and palm fronds (murara) craft wares offered by indigenous Zimbabwean craftspeople around the city and suburbia are worth investing in.

The metalsmith, basketweaver and furniture makerbelieves that COVID-19 should not dampen the human spirit, but further inspire creative innovation in people.

In a country where traditional artisanal skills abound, self-reliant artisans and furniture designers, such as Chimene, are surviving on traditionally inherited skills to make a living.

Though lack of funding is a major constraint for most artistes and craftspeople in the cultural arts industry in Zimbabwe and many are hampered by lack of materials and equipment, for Chimene, it is the lack of national recognition for the preservation of our culture and traditional skills thathe bemoans.

According to UNESCO, the highest exports of cultural products reached its peak in 2009, with Zimbabwe exporting US$16,4 million and US$32,3 million worthof products in 2012. These included visual arts, traditional cultural material and basketry.

From 2019 to 2021, the export of cultural goods declined significantly, owing to international and inter-regional travel restrictions as a result of COVID-19.

Basket weavers, such as Chimene, view the art of basketry as a rewarding and versatile craft that makes use of a wide range of natural materials that grow wild in Zimbabwe and are freely available throughout the country; particularly in Buhera, Hwedza, Binga and Nyanga.

These provide the durable and flexible raw material used for basketry that gives the expression ‘Grown and made in Zimbabwe’ genuine testimony.

Innovative basket weaver Chimene, who is a third-generation basket weaver from the Mabika family clan of Chipinge, explained in a recent interview: “The interweaving of various materials used in basketry can only be done successfully by hand and cannot be imitated by machines.

“Basketry is essentially the God-given gift and art of handiwork

“In ancient times, there were no machines.

“Yet Iron Age Zimbabweans designed and created all their practical vessels and furniture from natural materials by hand, long before the current Green Age.

“From large grain storage baskets to great cartage baskets; to fish traps, beer strainers and winnowing baskets, our ancient people designed and made baskets of great strength and longevity with very little weight.

“This was an important scientific consideration that was practical for the indigenous nomadic people of ancient Zimbabwe who carried their belongings with them where ever they went.”

Some ancient baskets, such as the chitundu – the Ndau medicine basket –have been re-contextualised in both form and function and are used today as vanity baskets.

He uses the natural shades of the various indigenous reeds to produce unique patterns of varying complexity on his basketry work.

His latest creation – the gonyeti design(indigenous slang for haulage truck) – is a huge washing basket measuring 70cm in height by 50cm, made using the continuouscoil technique, a multi-purpose vessel for both, storage and transportation.

A keen environmentalist and observer of nature, Chimene has fashioned coiled organic ‘murara’ into ‘creature comfort’ baskets for pets, such as dogs and cats, which he makes-to-measure.

In our new Green Age, woven basketry made from natural fibres has a very special appeal.

While the importation of cheap imitation woodwork made of plastic threatens the local industry, overseas nations, such as Britain, Ireland, France, Italy, Germany and the Scandinavian countries, are finding the appeal of natural fibres from Africa duly favourable.

Prior to the COVID-19 lockdown, Chimene was able to source commissions from the French Embassy staffas well as from clients from Britain, Italy, Germany, Kenya, Norway, Ghana, Nigeria, Zambia, the US and the South African embassy.

He says more Zimbabweans should invest in local basketware crafts.

Using the sophisticated four-to-five plait weaving technique, based on indigenous fractal mathematics, Chimene’s designs are reputed for their durability. His basketry is known to survive equally well in the extreme temperatures of Africa and those in the northern hemisphere.

Being one of man’s most ancient occupations, basketry is a universal craft that appeals to many cultures.

Baskets were needed as containers for everything imaginable – food, clothing, seeds, storage and transport. The art form is Neolithic man’s contribution to our contemporary culture and lifestyle.

Age old techniques and methods passed down 5 000 years ago are still in use throughout Africa today and, although dying out, are still well developed in Zimbabwe.

Baskets are common in Christian iconography too.

Christians have professed that the art of basketry was well advanced some 1 000 years before Christ.

Traces of baskets have been found at Great Zimbabwe and in various caves in Domboshava, Chishawasha, Guruve, Kariba, Zvimba and Makombe, where woven basket liners have left their impressions inside the fragments of ancient pottery.

Throughout the ages, the range of uses to which the craft of basketry has been used includes roofing, furniture, household vessels, mats, shoes, hats, corrals and agricultural containers.

In Zimbabwe, baskets are produced in many rural communities among the Shona, Ndau, Ndebele, Tonga and Shangani peoples.

Each group has its own distinct style determined by tradition and the availability of natural materials.

According to Dr Michelina Andreucci, a renowned collector, designer, writer and scholar: “Woven indigenous Zimbabwean basketry reveals a remarkable continuity in the material culture and ontological beliefs of the indigenous people and is, therefore, of significant historical, culturaland ethnographic interest.”

Chimene believes outdoor living is not only enjoyable; it saves electricity,with a meals tasting better.

With this in mind, he designed portable braai stands from scrap metal and galvanised mesh, in three sizes to save on electricity and suit the client’s requirements.

Born in Mwandina, Chipinge, Chimene inherited his weaving skills from his father and uncle who were both renowned basket weavers.

He began weaving professionally from the age of 19.

Following a brief spell in Chisumbanje, Chimene returned to his old calling of weaving in 2014.

Despite advanced technology, hand weaving retains the original human touch and such skills are relevant to both rural and urban Zimbabwean craftspeople.

The art of basketry from various rural centres would also create employment and generate wealth.

Dr Tony Monda holds a PhD in Art Theory and Philosophy and a Doctorate in Business Administration (DBA) in Post-Colonial Art and Heritage Studies.