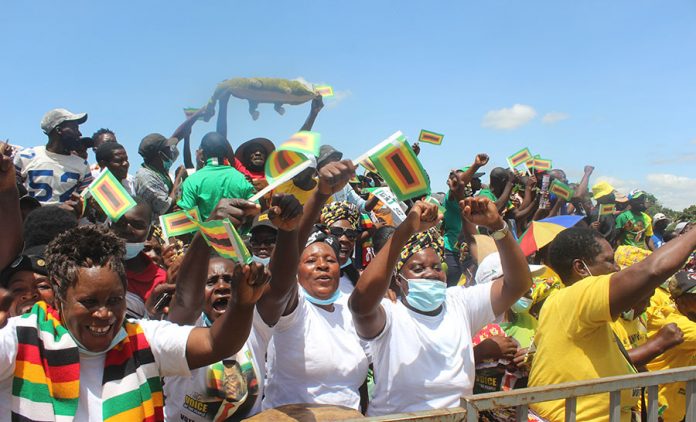 THERE are many reasons the much awaited 2023 harmonised elections are a foregone conclusion but one which stands tall is that ZANU PF owes its victory in those polls to its organisational capacity as well as mobilisation prowess.

While the opposition, in its numerous fragments, is busy throwing brickbats against the country, endorsing illegal economic sanctions and faking abductions, among other perfidious activities, ZANU PF is busy on the ground, strengthening its structures and mobilising its supporters in their numbers.

The opposition’s ‘strategy’ revolves on colluding with their Western handlers to label Zimbabwe a ‘failed’ State.

They thrive on bringing, to the doorstep of the masses, poverty, hunger and strife in order to go to the State House.

Their recklessness knows no bounds.

They open old wounds which may never heal, shamelessly telling the world that Ian Douglas Smith did well for this country, all to drive home what they believe is a ‘point’ that Zimbabwe has become a ‘failed’ State.

We do not need to remind this supposedly ‘lost’ generation of the heinous genocides committed by their Smith at Nyadzonia, Chimoio and several other places in and around the country.

We do not need to remind them that their beloved ‘hero’ Smith ran an economy that catered for less than 300 000 whites against a black population of more than five million.

We do not need to be reminded of the unfair distribution of land and natural resources.

For all their pretences, the inescapable reality is that they are not at all lost.

They know what they are doing.

They are, in fact, taking instructions from their white handlers, drawing silly comparisons under the lie that they are in the majority because they are ‘enlightened’ youths.

This recklessness, which has been allowed to thrive through benevolence of the Second Republic, is becoming increasingly irritating and thus provocative.

It has to be culled.

But because ZANU PF is no pushover, next year will give them a timely reminder that Zimbabwe is not about to be surrendered into the hands of our erstwhile colonisers.

And we are certain that they now have in their hands a report of the study that was recently done by Afrobarometer, together with the Mass Public Opinion Institute (MPOI), which shows that at least 51 percent of Zimbabweans trust President Emmerson Mnangagwa to lead the country to dizzy heights.

Survey principal Stephen Ndoma said, at the unveiling of the study’s results in Bulawayo, he used a sample of 1 200 people with an error margin of +/-3 percentage points.

“The majority being those with primary or no formal education followed by 58 percent of those of no or low lived poverty and the least is those living in high poverty who constitute 40 percent said they trust the President,” Ndoma said.

Let no-one be surprised when the all too familiar but now nauseating ‘rigging’ claims are thrown around when the opposition is trounced next year.

The second aspect that comes to the fore is that ZANU PF is on the ground, mobilising and putting in place structures to ensure yet another resounding victory in next year’s polls.

On Saturday last week, the Party was on a nationwide campaign of strengthening its grassroots and mobilisation units.

President Mnangagwa and his family took part in a cell meeting at Dambudzo Cell 1 in Sherwood, Kwekwe.

The Party is targeting 5 million votes in next year’s polls.

Addressing party members, President Mnangagwa urged them to register to vote in order to defend the gains of the liberation struggle.

“The freedom we enjoy today was brought about by men and women who sacrificed to go to war. People would get maimed and injured but others would keep sacrificing,” said President Mnangagwa.

“For 15 years, we battled hard until we secured victory and our independence. For us to preserve our independence, after every five years we go for elections to get a mandate to rule from the people.

For us to do so, there is voting which takes place. Go and register to vote, the process is easy. War was the harder part and that is already behind us now.”

“After every 10 years, our constituency boundaries are redrawn through delimitation, so the process is ongoing and the data being used is from voters who were registered by May 31 this year.

However, this does not mean registering to vote in 2023 has closed. They can still register to vote.”

As we look beyond the 2023 harmonised elections, it is imperative for our officials to continue with the economic transformation trajectory that the new dispensation has embarked on.

Let us also not pay attention to the nonsensical sideshows by the fragmented opposition whose agenda is to destabilise the country.