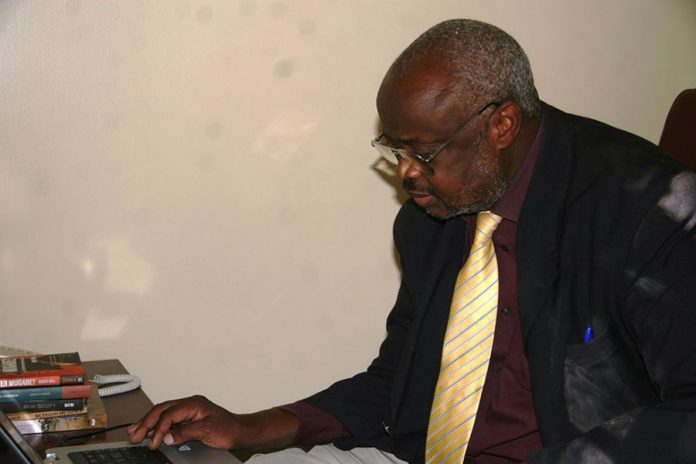 THERE once was, there still is, a great freedom fighter by the name Alexander Kanengoni, who left us on  April 12 2016.

He fought the war of liberation and when he came back home, devoted himself to defending the soul of the nation.

As a writer, a journalist and as one of the founding editors of The Patriot, he did not allow anyone or anything which challenged, denigrated, sullied, diminished or desecrated the edifice called Zimbabwe to go unchecked or unchallenged.

Affable, a gentle giant, yet he was the harshest defender of Zimbabwe. Before liberation, he defended Zimbabwe with an AK; after independence his pen pursued the same.

Today I want to honour his memory by revisiting the war front, from whence he defended his motherland from the colonial regime.

Comrade Kanengoni loved the people of Zimbabwe, which is why he left for the liberation struggle.

He was a man of the people — rich or poor, their status did not matter. He was a friend to all, thus ZANLA, the people’s liberation army, was the right place for him.

He left for the struggle immediately after his first pay check as a temporary teacher; thinking nothing of himself, he used the money to buy his father a suit and a music ‘record’ for him to enjoy with his wife, Alexander’s mother.

He boarded the train for Mutare.

Relatives were worried, they did not want him to go and die, they sent someone after him, they caught up with him but there was no joy, he would not relent, he left for the struggle.

Like so many young Zimbabweans who were called to the struggle, his heart was singing the song:

He was called and he accepted.

This was a war unlike most other wars; it was a people’s war.

This means the masses were a principal force in the liberation war.

This was a critical cardinal in the fulcrum which won the liberation war.

Not only were the freedom fighters taught Nzira dzamasoja, the correct way to relate with the masses, not to commit adultery, not to be cruel to the masses nor to the enemy, to be honest in their dealings with the masses, in everything to relate to the masses with love and respect, to respect the ways of the people, not to violate the spirituality of the land, to be humble, to take themselves as the sons and daughters of the masses.

It was a people’s war; the freedom fighters were to work with the masses as comrades-in-arms, not as objects to be exploited for their benefit.

The masses were fellow fighters, nothing less; the difference between them was that the comrades were armed while they confronted the enemy without arms.

The masses were confronting the enemy in other ways, their mere presence was intimidating to the Rhodesian terrorists.

Whenever they saw one of the masses, they became nervous and they would harass them even when they could pin nothing on them. This is because the masses and the freedom fighters were one.

Nothing in the masses or about the masses reassured the Rhodesian terrorists; they were in the wilderness where nothing was on their side; they were alone in a land called Zimbabwe, because everyone wanted their land back from the British armed robbers and in their sons and daughters they had found champions to lead them in the war against the imperialists, they were not going to be found wanting.

This is precisely what Comrade Herbert Chitepo, Comrade Josiah Tongogara neDare reChimurenga had taught the liberation fighters before sending them to the front.

They said: “Go and talk to the elders, the spiritual leadership, the chiefs, ukuru hwose kumusha, tell them we have decided to wage the war to dislodge the white armed robbers, hear what they say and report back to us.”

The response was overwhelming: “This is what we have been waiting for, we are ready for you our children, was the response from the elders.

From Mabweadziva, the spiritual leadership of the land gave their assent: ‘I have sent you, I will be with you, in a war you will kill the enemy, you will also be killed, but if you follow the laws (Nzira dzaMasoja) the war will not be too hard’.”

And the spirit of Tumbare concurred.

It was a people’s war; consultation with the spiritual leadership was constant, so it was with the chiefs and other community leaders.

The masses knew their role in the struggle and how to interface with the freedom fighters.

The masses were in charge of logistics, ensuring vanamukoma had food, clothing and medicines, among others.

They also played a critical role in intelligence; the whiteman could not enter any territory without being spotted by the masses. The comrades, therefore, had an accurate update of enemy movements, the numbers, the type of guns, their dress, even their demeanor at any time. Because of the presence of the masses everywhere, the land was a veritable fortress, there was nowhere to hide for the Rhodesian terrorists.

The people covered the tracks of vanamukoma — when confronted and interrogated by the Rhodesians the masses always misled the enemy.

They took comrades injured in battle to safety and nursed them, burying those killed in battle.

The masses were fellow comrades to the freedom fighters; they were parents, friends and compatriots.

The participation of the masses, hand-in-glove, was a great morale booster to the fighters.

If you are going to die so that people can be free, if you abandon everything to fight and die for others, and they shun you, it would hurt and be debilitating, though you would never give up on your commitment to liberate them.

Fortunately for the comrades, the masses fought side-by-side with them and at great peril to themselves.

They were incarcerated, tortured, hanged or shot in cold blood for working with the freedom fighters, for being fellow fighters with ZANLA and ZIPRA cadres.

The people sacrificed and suffered; they died side-by-side with the freedom fighters.

Young and old accepted dangerous missions to help the fighters.

There were some sellouts among the people, but they were a drop in the ocean.

We shall ever say thank you to the masses of Zimbabwe for being our special compatriots in the war of liberation.

The war of liberation was won, with the masses as critical compatriots of the freedom fighters. As we struggle to build a Zimbabwe we dreamt of, there is something to be learned from the way they and the masses worked hand-in-glove.

Whatever programmes we want to launch for the development of the country, it is important to make it ‘a people’s war’.

The masses have to know and understand what it is all about and they need to be ensconced as stakeholders who are responsible and capable.

The freedom fighters never patronised the masses; they worked with them as partners, as comrades-in-arms. Whatever challenges we face as a nation, be it in the economic, political or socio-cultural arena, we need to use the correct approach, that of the Dare reChimurenga, under Chairman Chitepo, the one used by spirit Tumbare.

This land belongs to the people of Zimbabwe; whatever programme we champion, the masses have to be critical participants so that we can win, just as we won the war of liberation.

Comrade Kanengoni, ‘Uncle Kally’, working with you at The Patriot was so liberating; it was ‘a people’s war’, with you as the leader.

It was possible to come into my own as a compatriot, a fellow fighter in the war to defend the Soul of the Nation.

You did not patronise or compromise us but you challenged us to bring out our best.

Thank you for carrying and practicing Nzira Dzamasoja — you empowered us so we continue the work you left us even though you are now on the other side.

I know you see us!