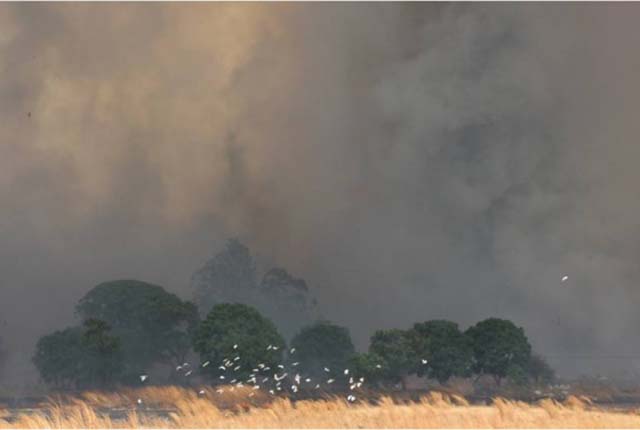 This is not the first time a fire has raged at the site with authorities failing to drowse it out.

Residents in the northern suburbs have complained of the heavy smoke which chocks them each time the man-made mountain of waste removal flares up, threatening humans, living organisms and the environment.

Although our eyes do not detect the damage in the stratosphere, it is a fact that the ozone layer depletes as carbon monoxide aids greenhouse effect.

The burning dump site is owned by the City of Harare.

Although the fire is subsiding, mixed waste material dump sites appear to be receding, yet combustion is taking place depths into the ground gaining momentum, flaring up again in a distance. Such is the nature of Pomona Dump Site.

Highly combustible depths of mixed waste material lies ready to burn at the slightest stroke, at times starting another fire smouldering from the rumbling chemical reaction beneath.

Currently with thick smog blurring visibility in the northern suburbs, the road leading to the dump site has been temporarily closed to avoid accidents from cars piling up.

The thick smoke is polluting the environment, thereby suffocating residents.

The thick cloud of smoke has drifted kilometres away to neighbouring locations like Mt Pleasant Heights, Good Hope, Westgate and Mt Hampden, among others.

Evenings are chocking for people with allergies.

Asthmatic attacks for the Fairview community in Mt Hampden have been on an upward trajectory.

If the health impact is felt by communities so far, what then does this spell for residents in the vicinity, the northern suburbs?

The City of Harare chief fire officer, Lovemore Mafukidze, in a video clip on the city’s facebook page recently informed residents that the authority was working flat out to put the raging fire out.

Said Mafukidze: “We are working flat out to put out the fire…we have no water hydrants in the vicinity hence bringing water in trucks and bowsers has slowed the fight…the fire was started by an electric cable that fell in the area, it burnt grass, spreading to the dump site catching fire, … quickly spread… We hope to be able to put the fire out anytime soon…the challenge lies in the dump site being deep.”

In April 2012, the City of Harare informed residents of a joint venture with Infinite Energy Zimbabwe, a local investor.

The project was based on smart disposal of waste, where the city would hold 15 percent of the biodegradable business project with Infinite holding 85 percent.

The project never took off.

With Harare’s northern residents crying out for decades for correct waste disposal, the city has given promise after promise to tackle the Pomona menace, but yielding no joy for residents.

“Public health has significantly been compromised and residents in surrounding suburbs have to contend with the possibility of deadly respiratory infections,” he said.

“In terms of the Environment Management Act, the Public Health Act and other local government laws, the local authorities should put in place sustainable waste management methods to process their waste.

“There must be technology to absorb all the toxic gaseous emissions to minimise harm to the citizens.

“This is the situation that repeats itself yearly, but still there is no solution in sight.

She called on the media to inform and help the organisation’s clean up environment campaigns by educating citizens on proper waste disposal.

Not all waste should find its way to dump sites.

“In terms of our law, dumping waste in the present manner that Harare City is doing has been outlawed in terms of Statutory Instrument 6 of 2007,” she

“Local authorities were given a grace period, which expired on December 31 2012.

“By January 1 2013 authorities were expected to use standard sanitary landfill.

“Gwanda rural authority, among a few others, have complied, although these authorities still have more to improve on, it’s a good starting point.

“With these, the ground is lined to prevent seepage with rubbish sorted out into classes.

“Dumpsites, by nature, have a negative impact of polluting the ground.

“With the burning Pomona dumpsite, air pollution is a cause of concern.

“Carbon monoxide is released, it depletes the ozone layer and this is detrimental to health.”

On the measures taken by the authority to bring Harare City Council to order, she noted the on-going battle, from engagement, hearings and board meetings spilling into the courts.

“We have always engaged the city council, board meetings over the issue have been held, orders have been issued to the authority, disciplinary hearings too, court injunctions have been issued, still we await the city to comply,” said Sidange.

“The issue is not over with litigation in place.

“We are working hard to make sure that the fire is extinguished even though it is quite a battle because it is a fire, which is deep-seated and is also being supported by the gases from the trash, which add to the combustion.

“We are grateful to the corporate world which has come on board with fuel, water, accessories and tools to put out the fire.

“We are also grateful to individuals for the food they have donated to the workforce on site and we applaud the moral support.

“As EMA, our focus is on a safe and clean environment.

“The Pomona combustion’s damage of the ozone layer cannot be underplayed too.

“The ground and surface water gets polluted, resulting in a decrease of vegetation in those environs.

“It is common to find private players also dumping toxic waste at Pomona.

“Waste should be sorted out before dumping.”

Sidange urged the city to at least compact the dumpsite as a corrective measure as they embark on complying with the orders.

“We have ordered the city to at least compact the dumpsite, however, the city continues tipping waste at the site without any compacting taking place,” she said.

Dr Iris Shiripinda, a health science lecturer at Africa University, Mutare, said the negative effects of carbon monoxide can be felt immediately or in the long term.

“Carbon monoxide is harmful when breathed in because it displaces oxygen in the blood and deprives the heart, brain and other vital organs of oxygen,” said Shiripinda.

“Large amounts of carbon monoxide can overcome one in a flash

with a suffocating effect resulting in fatigue, headaches, confusion and dizziness.

“Due to the inadequate oxygen delivery to the brain, which can lead to unconsciousness or death.”

Harare City Council spokesperson, Michael Chideme, speaking on radio, said council was working flat out to put out the fire.

“As council we are working flat out to put out the fire,” he said. “We advise residents around that area to close their windows as the smoke may affect people with underlying conditions.

“We urge residents to take due caution when driving in the area due to limited visibility.”

However, feet dragging by the City of Harare on finding a sustainable project, which is environmentally friendly will delay achieving a clean city status.