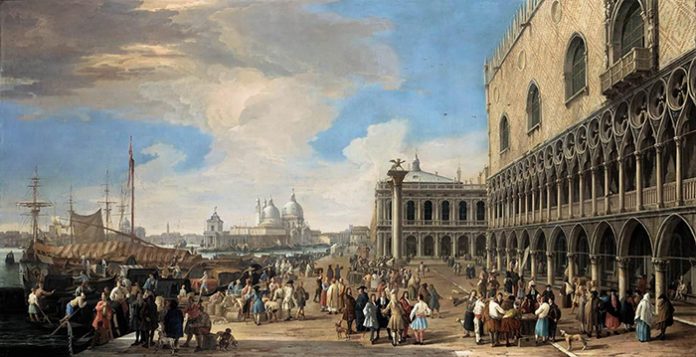 Those established family firms remained the dominant form of business enterprise until the 18th Century.

There were many more families, however, to which monarchs and businessmen could apply for loans.

Their banks (from the Italian word ‘banco’) developed techniques and institutions that remain in force to this day.

They accepted deposits and paid interest on them; made commercial as well as political loans; engaged in merchant banking activities; offered lines of credit to favored clients; and arranged letters of credit for those involved with international and national trade.

Security was often required to back up the loans, for which they would accept jewellery, land or buildings — testimony to how some of the banks evolved from pawnbroking activities.

From nobles, they would take the right to collect taxes or commissions to conduct business in the realm.  Merchants could buy and sell without transfers of coin or barter, drawing instead upon accounts at one or another Italian bank.

The Venetians learned bookkeeping from the Arabs and the Arabic numbering system, both of which rank among the basic building blocks of commercial society.

This does not suggest that ‘modern’ business practice began in the late Middle Ages, but rather that the more worldly outlook of businessmen and bankers of that period was creating a new dispensation.

Italian banks were often organised as ‘societas’, in which the members contributed either labour or capital. The liabilities were unlimited, so that each member was liable personally for debts the ‘society’ incurred.

The benefits of this form to creditors are obvious, as are the drawbacks to the partners. Consequently, a new form came about — the compagnia (company) — in which liabilities remained unlimited, but the partners’ contributions were in the form of shares, with voting rights and distributions assigned by the number held.

In addition, there were three forms of long-term liabilities: earnings retained in the business, additional funds contributed by partners and investments in the form of deposits made by outsiders, each accruing interest according to earnings, generally between five and 10 percent.

Meanwhile, the failure of the Crusades to the Holy Land had resulted in a loss of prestige and power for the Papacy. Islamic States were also weakened and the Byzantine Empire destroyed.

There was dislocation in Europe, but an energising sense of adventure emerged as well.

The French monarchy was enriched; the German Kingdom was enfeebled. Some knights suffered impoverishment, whereas a few reaped great wealth.

In many cases, nobles had to sell land and manorial rights to townspeople who were enriched by profits from trade. Peasants, whose produce was fetching higher prices, were able to obtain sufficient earnings to pay for rights and liberties.

All of this resulted in a liberation of labour and capital that provided major stimulation for capitalism, the kind that would be seen in the late 20th Century when communism imploded and market forces became predominant throughout Eastern Europe.

Most importantly, thousands of Europeans had gone to the Holy Land and this broadened their vistas.

During the Roman Empire, Europeans had enjoyed Eastern spices, such as pepper, which had traded ounce for ounce with gold; many spices from south-west India; cloves from Indonesia; and cinnamon from Sri Lanka.

This commerce had ended during the early Middle Ages. The Crusaders rediscovered the joys of these and other condiments, along with Eastern fruits, vegetables and luxury items. From the Moslems, they learned of damasks, muslins, velvets and satins.

Of great importance was the knowledge of banking and the use of credit gained from Byzantium and the Moslems.

All this might have occurred without the Crusades, since Europe was making progress along these lines before the First Crusade had begun.

As it turned out, the Crusades appear to have accelerated the movement and quickened the pursuit of wealth, power and status among the kings and nobles as well as among the rising merchant and manufacturing classes.

The Italian city of Venice was best situated to capitalise on these new developments, and was one of the principal beneficiaries of the Crusades.

The city was surrounded by navigable waters, and protected from attack by marshes. Thus, Venice, in a significant way, stood at the centre of things, while it also had good access to the East and the great Christian cities.

The Adriatic led southwards to the Mediterranean and relatively easy reach of Africa’s northern shores. Though Spain was further away, it too lay within the range of Venetian vessels. To the west, the Po and Adige rivers enabled Venice to trade with such cities as Padua, Milan, Ferrara and Mantua.

The cities of southern Germany could be reached through the passes of the eastern Alps and the western passages of Switzerland.

In the 1170s, Frederick Barbarossa, the German Emperor, was trying to restore some aspects of the Roman Empire.

Standing in his way were local rulers struggling to maintain their power, some of whom were organised into the Lombard League which comprised 15 leading northern Italian cities. Venice, a founding member, at the same time was involved in a frustrating war against Byzantium.

The doge financed these wars by borrowing heavily, pledging the government’s revenues for the next decade.

In addition, there was to be a forced loan, with each citizen assessed according to his means. The armies of the Lombard League defeated Frederick in1176 and, with the victory, won complete independence.

The doge Justinian Partecipazio, leader of the city when it was still considered a minor ally of Byzantium, wrote of 1 200 silver pounds he invested in commercial activities.

The city’s merchants would buy or trade for northern European lumber, iron, naval stores and slaves in exchange for Eastern spices, silks and ivories.

Venetians went to the Near East to learn its crafts and methods, among them Arab techniques for manufacturing glass and embroideries, which then were employed in Venice, making that city a centre for the production of these two highly desirable products.

In addition, salt extracted from its lagoons was sent both north and east.

Venice pioneered in creating banking techniques, making a virtue of a necessity.

For Venice, however, conditions worsened. The other war went badly, and a plague struck.

The doge was assassinated, and the commercial aristocracy took matters into their own hands, selecting another doge and transferring power to a new 480-member council.

The new doge promptly refinanced the old loan; in so doing instituted a change the merchants demanded.

The new loans, they said, had to be transferable, since they intended to sell the paper to customers and so remove their exposure.

This term was accepted, with a registrar appointed to keep track of who owned what.

Before long, money changers were buying and selling loans on benches near the Rialto Bridge. Thus, elements of modern investment banking and securities markets were ‘invented’ in 12th and early 13th Century Venice.