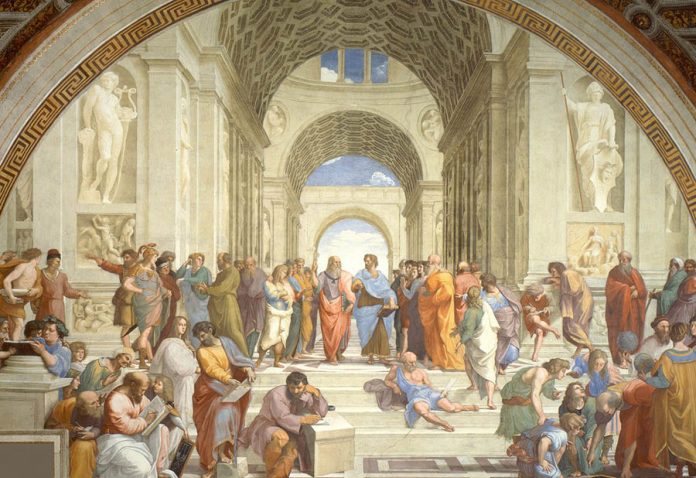 IN the age of agriculture, when most people struggled simply to survive day-to-day, a handful of creative entrepreneurs built huge fortunes.

Some became giants in agriculture, while others grew rich shipping crops or manufacturing farm equipment.

Given the typical Greek state’s general lack of involvement in the exploitation of its own resources, or even in the collection of its own taxes, it is not surprising that trade and commerce were likewise in the hands of independent entrepreneurs.

Although commerce was an essential part of Greek economic life and the Greeks were net importers of grain, the large majority of Greeks were still subsistence farmers, like their counterparts in the Near East.

However, since grain could be produced far cheaper elsewhere, beginning in the 5th Century BC, many farmers turned to cash crops, such as olives and grapes.

The importance of commerce to the Greek world was apparent everywhere.

The central feature of every Greek city was its marketplace, or agora.

Almost every aspect of Greek life revolved around it.

Often, it was the place of popular assembly meetings and judicial proceedings; the philosopher Socrates wandered through the Athenian agora talking to his students.

The agorai of the poleis were not the sites of periodic fairs, but were continually occupied by merchants and townspeople doing business,exchanging information and socialising.

Commercial activity in the local markets was enhanced by the introduction of coinage.

First developed in Lydia (modern western Turkey) about 650 BC, coins were quickly adopted by the Greek city-states. Although the issuing state guaranteed the weight and purity of the coins, they were not always trustworthy, for counterfeiting was practised and shaving coins was prevalent.

The smallest Athenian coins were made of copper, eight of which made an obol, which was of bronze, and six of these comprised a drachma, a silver coin.

One hundred drachmas was a mina, and 60 minas a talent.

There was no paper money. While trade and commerce, especially among city-states located near the sea, employed a sizable segment of the population and were responsible for the prosperity of many communities, most merchants and traders were small entrepreneurs.

The chief Greek exports were olive oil, fine pottery and silver from Athens;

textiles from Miletos and Samos; wine from Chios, Naxos, Lesbos and

Thasos; copper from Euboea and Cyprus; and iron from Sparta.

The chief imports were grain and timber.

The Athenians, in the fifth and fourth centuries BC, imported three-quarters

of the city’s food supply from the northern shore of the Black Sea.

In the sixth century B. Solon, the Athenian lawgiver, obtained an embargo

on the export of grain from Athens that was never repealed, proscribing

the severest penalties  for its violation.

Where there are merchants there are people who will provide funds,

would be considered personal loans secured by collateral, 10-12 percent

Ten percent was considered an acceptable rate to charge friends;

was considered usurious, but there were few laws regulating the rate of

Among the Athenians, the only set rate was with respect to the return of

In fact, there were no regulations prohibiting the commingling of personal

and deposited funds, no

requirement to pay interest on deposits, no rules compelling uniformity

of practice, no restrictions on the bank’s use of deposited money

and no cash reserve requirement.

Initially, banking had been the province of the temples.

They loaned money chiefly to the state with which they were associated,

while most private loans were handled by individuals.

safekeeping or investment and lent money at interest.

Money changing was a necessary function because of the great number

of city-states, literally hundreds, all of which produced their own coinage.

Foreign merchants or travellers often would need to exchange their money

This practice probably represented the origin of banking in the Greek world,

but it was considered a barely reputable profession in later times.

The larger banking concerns held money for their clients and dispersed

Banks offered a cash return on funds deposited with them, not in

the modern sense of interest, but

as if the banker had obtained a loan from the depositor.

As a result, banking was often referred to as “owing funds to many”.

Owing to many then meant that the banker was doing very well.

During the era of the poleis, Greek banks never were very large concerns,

and most of their operations were conducted on a very personal level.

As Demosthenes, the 4th Century BC Athenian orator, records: “It is the custom of all bankers, when a private person deposits money and directs that it be paid to a given person,to write down first the name of the person making the deposit and the amount deposited and then to write on the margin ‘to be paid to so-and-so’; and if they know the face of the person to whom payment is to be made, they do merely this, write down whom they are to pay; but, if they do not know it,it is their custom to write on the margin the name also of him who is to introduce and point out the person who is to receive the money.”

This way, merchants did not have to carry large sums from city to city.

Theoretically, this rather cumbersome process protected the client from loss and the bank from lawsuits.

It is interesting to note, though, that our knowledge of the practice comes

Part of the business of banks was to circumvent the prying eyes of government, especially taxing authorities.

The Athenian banking business was helped considerably by foreigners hiding assets, much in the way ‘offshore’ banking has become synonymous with organised criminal activities these days.

While banks gave loans for a multitude of activities, from the purchase of businesses or property to ransoming captives, most of the surviving records refer to maritime loans.

A merchant might borrow from bankers to purchase goods in foreign lands, the security being his reputation and the cargo.

He would also sell a contract to deliver a cargo at a specified price, receiving payment in advance.

Then, when the merchant returned with his cargo, he would sell it in the marketplace.

If it brought more than the futures contract, he would pocket the difference.

If not, he had to make up the difference. And of course, the loan would have to be repaid as well.

There also were ‘bottomry loans’, in which the lender advanced funds for a voyage that was secured by the hull and its cargo.

However, if the ship failed to arrive safely at its destination because of shipwreck or piracy, the loss was borne by the lender.

These were, consequently, very high-risk loans,but they were also high-yield loans if all went well. In any case, the rate of interest was usually high, ranging up to 30percent.

Dr Michelina Rudo Andreucci is a Zimbabwean-Italian researcher, industrial design consultant and a published author in her field. For comments, e-mail: linamanucci@gmail.com