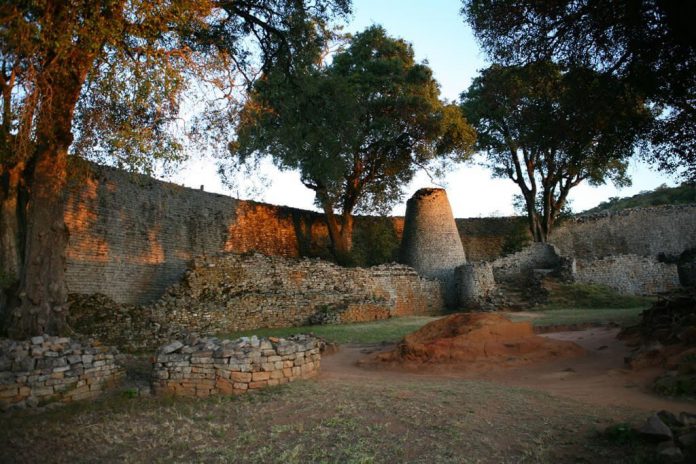 RUINS of the Great Zimbabwe, situated on the edge of the Zimbabwe plateau just as it starts to descent to the lowlands in the east, provides archaeological evidence of an early, sophisticated civilisation that grew from wealth and power.

Working with non-written sources, much of what is known about the history of the Great Zimbabwe has been reconstructed by archaeologists and anthropologists from the buildings, artefacts excavated from the site and the landscape that provides many clues about life in the past.

Early occupants of the Great Zimbabwe were cattle farmers, but they also grew crops such as sorghum and millet.

Evidence suggests that the early Shona were ‘carnivorous pastoralists’.

Archaeologists found about 140 000 pieces of animal bones on the lower slopes around the Great Zimbabwe.

Almost all of these were cattle bones; significantly, about 80 percent of the bones of slaughtered cattle dug up at the Great Zimbabwe site came from animals between 24 and 36 months old — the age when beef cattle are in their prime. This is evidence that the people here used cattle mostly as a source of meat rather than as a source of milk.

It also suggests that the Great Zimbabwe was a stable settlement.

The people living there did not move around in search of grazing for their herds. They were able to stay in one area for centuries and become a wealthy community.

The Great Zimbabwe is the largest stone-built walled civilisation in Southern Africa. Building started around the year AD 1280.

At its height, it has been estimated that between 18 000-20 000 people lived at the Great Zimbabwe

The massive stone walls vary in height and size to create different spaces called enclosures. Each enclosure was home to people of a certain social status.

Archaeologists and anthropologists have used a number of sources in trying to reconstruct the systems of power and status that existed in the Great Zimbabwe.

For example, in Shona culture, mountains are symbols of political authority. The king/mambo or ruler was intended to be inaccessible and live separately from the rest of the people.

Therefore, the Hill Complex, the palace of the king or mambo, was the highest and most decorated structure, with spaces provided reserved for religious ceremonies.

In the Hill Complex, archaeologists found objects such as gold and bronze, among them were spearheads, which were all symbols of leadership.

All settlements, according to Shona custom, had a dare — a meeting place, where people discussed matters and resolved disputes through discussion and negotiation.

The dare at the Great Zimbabwe was large, reflecting the king’s wealth and power.

The lower homesteads probably belonged to the wives of the mambo. It was the first wife’s right and duty to keep the king’s possessions.

The biggest collection of valuable items was found by archaeologists in the lower homestead, including Persian bowls, Chinese dishes, ivory and gold beads.

A number of the king’s spears and axes were also found here, as well as a monolith with a soapstone bird.

According to Shona custom, the bird was a symbol of protection during the birth of royal children.

The Great Enclosure, about 600 metres away from the Hill Complex, is believed by some to be the home of the vahosi (first wife).

Others think that it was an initiation school known as a domba where young people were initiated on the rules and customs of the community.

There is also a speaker’s platform in the Great Enclosure and a number of private and public spaces, consistent with other domba enclosures elsewhere.

Remains at the Great Zimbabwe suggest it was a highly stratified society in which there were sharp divisions between the rich and poor.

Food was plentiful and the king or mambo lived in some luxury, as did the nobles who lived in the terraces.

Their houses here were much larger than anywhere else and were built with the best quality stonework.

The commoners lived in fairly close proximity to each other in small huts around the inside and outer wall.

According to P. Tyson, in The Mystery of Great Zimbabwe, the dagga/mud dwellings within the stone enclosures “…are unquestionably African in every detail and belong to a period which is fixed by foreign imports as medieval…”

The Great Zimbabwe was a wealthy centre of cattle and cereal farming and a major link in the trade between the people inland and the Swahili Kingdom at Sofala on the coast of Mozambique.

ofala had traded with much of East Africa as well as with India and China. Archaeologists have found artefacts which show that the Great Zimbabwe was a trading centre, including thousands of glass beads, coral and cowrie shells and a Portuguese coin that probably came from the trading city of Kilwa on the East African coast.

Gold mining was widespread in traditional Shona society. Gold from further inland was sold to traders on the East Coast of Africa.

It was estimated that by the time the colonial industrial production of gold began in the area around 1890, thousands of reefs had been mined on the central plateau.

Cotton was grown widely in the region and weaving of local cloth was undertaken. Finer cloth was imported by the wealthy via traders from the East Coast.

The kingdom of Zimbabwe came to an end in around 1450 AD.

Thereafter, the settlement was deserted. The ruins of the Great Zimbabwe have become Zimbabwe’s symbol of freedom from oppression and colonial rule. Symbols of the ruins have been used on Zimbabwe’s banknotes, coat of arms and the flag.

Whilst ‘currency’ (coins and banknotes) is commonly assumed as something that came to Africa from outside (brought by European colonisers), the African continent, however, has a long monetary history going back thousands of years. It began with cowrie shells; a currency that linked West Africa to India and China for centuries. Some of Africa’s earliest coins circulated between the eastern Swahili coast, the Persian Gulf, China and the Great Zimbabwe.

Following the end of colonisation, independence brought new national currencies, each revealing a vision of the past and future. Africa is now known as the ‘frontier of innovative mobile banking’.