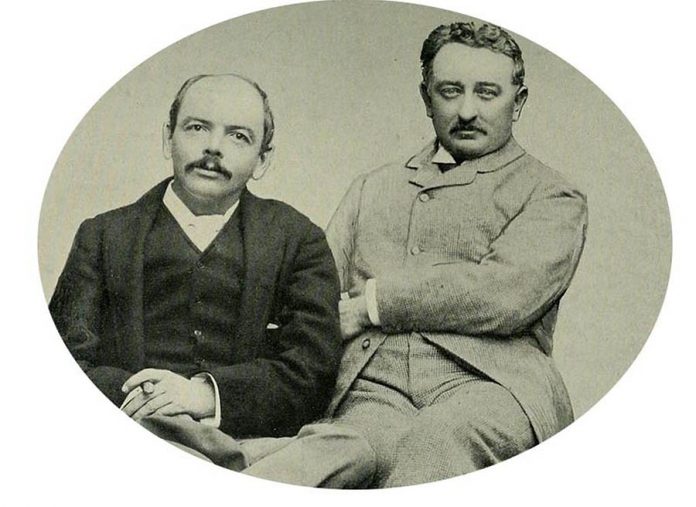 THE burial of Cecil John Rhodes in our most sacred Matobo Hills on April 7 1902 was not a spur of the moment decision.

The deceased homosexual had personally made the decision and chosen the site in early 1896.

One day in early 1896, the homosexual had ridden into the Matobo Hills with Albert Grey (Cooke 1896:17) and ‘… made a wonderful discovery… a hill from which a wonderful view can be seen.’

He had recognised it for what it was and said: “I call this one of the views of the world.”

The place has, ever since, been called: World View.

The act of naming was, obviously, an act of seizure – an act of appropriation.

A name is a handle, and you name in order to control.

Naming also comes across as an act of occupation — an imposition of the namer ‘World View’ on the thing that is being named.

The homosexual confirmed the ‘occupation’ sense when he then declared: “I shall be buried here, looking towards the north, and the remains of Allan Wilson and his party must be brought from Fort Victoria and placed in the memorial I shall put up in their memory.”

The intention was to transform the place into a colonial hero’s shrine, espousing the homosexual’s world view.

The burials would be the ultimate attempt to breach the sanctity of the Matobo Hills – a sanctity derived from Njelele, the shrine of Murenga, also known as Nembire, Mwari, Mlimo, Sororenzou or Pfumojena.

Pre-colonial Zimbabweans went to Njelele (Murenga’s shrine in the Matobo Hills) with the troubles of the land.

They went there with the view that when rain fell, it would fall for everyone.

They went with the view that no one would intercept it to create desperation designed to translate to individual benefit.

No one would subvert a national blessing into an exclusive individual enterprise.

The Zimbabwean worldview as espoused by Murenga was a communal ownership of all God-given resources.

The land, the minerals and wild life belonged to all.

In the foregoing respect, the burial of Rhodes in the Matobo Hills turned the shrine into a site of struggle because the British settler’s worldview was the exact opposite of everything Murenga stood for.

Rhodes’ being a racist and a homosexual was a double tragedy for Murenga’s descendants and the composite threat such a devil’s worldview posed on black Zimbabweans was genocidal.

For one, racists are intolerant of the livelihood of other races.

Their principle of life is ‘live and let die’.

For black people, this is not an assumption but a lived experience spanning 500 years.

Secondly, homosexuality, as a worldview or principle of life, epitomizes suicidal depravity in its most absolute and grossest form.

Homosexuality as a worldview or principle of life inadvertantly promotes human extinction.

The homosexual wants to be the exclusive and terminal beneficiary of the God-given gift of life.

The homosexual wants to be a man, and then he also wants to be a woman in order to be the terminal and exclusive sexual beneficiary of his own manhood.

Homosexuality, as a worldview or principle of life, is not reproductive of life.

One born of man and woman refuses to extend life to posterity.

It does not matter that others deposited it into them with the view of accruing the numerical interest that sustains mankind.

With regards to all the foregoing, the proposition that the outbreak of the First Chimurenga in Matabeleland, immediately following the homosexual’s decision to be buried in the Matobo Hills, was an ancestral reaction to that affront is not outlandish to those who believe in their ancestors.

We are the insiders.

We should know better than Terrence Ranger, Marshal Hole or Robert Blake and others.

The curricula were obviously a permutation of the genocide recommended by the Catholic missionaries.

The curricula would guarantee a permanent emasculation of the spiritual Patriotic Front – the astonishing collaboration between black ancestors and descendants that had powered the First Chimurenga.

Above everything else, the burial of homosexual Cecil Rhodes in Murenga’s sacred Matobo Hills foregrounded the whole white settler-worldview for moral anatomy. And, what came across is a haphazard obscenity in the alliance between British imperialism and the Christian religion.

One is reminded of how Christian missionaries provided the intelligence for colonial occupation and dispossession of Africa; how missionaries drafted and interpreted the treaties that were used in the swindle; how Christian churches were rewarded with over 330 000 hectares of land for their part in the swindle; how Catholic bishops suggested the massacre of all Shona people above the age of 14; how the same Christians who facilitated the theft of our land are the same ones who sought to baptise their victims before execution; how they gave their victim of their theft (Gumboreshumba/Kaguvi) the name of a thief (Dismas); how they buried their victims in unmarked graves.

And the ultimate obscenity was how the homosexual’s funeral was stretched across the Christian Easter week of that year (26 March-07 April 1902) and how the tomb was hewn from rock and had a rock lid like those in ancient Palestine.