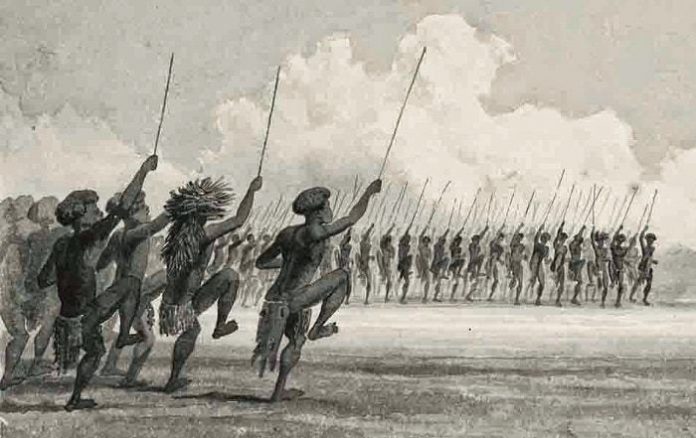 IT is pertinent to state again that the war in Mashonaland started with the trial of an invader, Native Commissioner Henry Pollard, by the ancestral spirit of Nehanda operating through the medium Charwe.

It is even more pertinent to restate that in real life, Nehanda had been the daughter of Murenga, the godfather of Zimbabwe, also known as Sororenzou or Pfumojena.

The instruction to Mukwati to start the First Chimurenga had come from Murenga’s spirit in the Matopos.

Hindsight shows that the history of the white settler in Zimbabwe has understated the significance of the trial of Native Commissioner Henry Pollard by the spirit of Nehanda.

That is, of course, what happens when the history of ‘natives’ is told by ‘native commissioners’.

The trial of Pollard by the ancestral spirit of Nehanda for crimes committed on her descendants was an assertion of the highest form of Shona sovereignty and a definition of a patriotic front teaming up with the ancestral founders of Zimbabwe and their living heirs.

The ancestral founders translated to a supreme court of the land and their judgment was a complete disregard of the Moffat Treaty and Rudd Concession signed with King Lobengula.

The invaders would have to answer directly to the ancestral founders of the land they were violating.

In view of the foregoing, the fact that the war that started with the trial of an invader by a founding ancestral spirit of the land had to end with the trial of the same spirit’s medium and an attempt to exorcise the spirit through a conversion and baptism of the medium cannot be taken lightly.

The court that tried Charwe was the High Court of Matabeleland, sitting in Salisbury on February 20 1898.

The case was entered as: The (British) Queen against Nehanda’.

The presiding judge was Judge Watermeyer with Herbert Hayton Castens Esquire as ‘the acting Public Prosecutor Sovereign within the British South Africa Company (BSAC) territories (prosecuting) for and on behalf of her majesty.’

‘The (British) Queen against Nehanda’ as an outline of the case that (did not end but) ‘adjourned’ the war to a later date inadvertently defined who the real sovereign in the land was.

It was the ancestral founders.

Matabeleland, whose High Court tried Nehanda and the resistance leaders in Mashonaland had fallen with the surrender of Ndebele indunas at the first indaba in the Matopos on August 21 1896. Thereafter, the Ndebele indunas had accepted positions in the BSAC administration.

Nyamanda, the eldest son of King Lobengula, had become the head induna of Bulawayo District where the High Court of Matabeleland was based.

It is the High Court of Matabeleland that tried those who had refused to surrender in Matabeleland.

In a scheme deliberately made to divide any intertribal patriotic front formation, the court had spared the lives of Siginyamatshe and Mpotshwana who were Zansi, and condemned Mtini, Makumbi and Winya (Uwini) who were Shona/Amahole to death.

In the Mashonaland case of the British Queen against Nehanda on March 2 1898, the same court found Charwe, the medium of the spirit of Nehanda, guilty of the ‘murder’ of the British ‘murderer’, Native Commissioner Henry Pollard.

She was sentenced to death.

The execution was authorised by Alfred Milner, the British High Commissioner for South Africa and endorsed by the British Imperial Secretary on March 28 1898.

Thereafter, Roman Catholic Priest Father Richartz was assigned to convert the condemned Shona resistance leaders to Christianity, the religion of the invader.

Father Richartz was from Chishawasha Mission, founded by Father Hartmann who had been a Chaplain to the Pioneer Column in 1890.

For that reason, homosexual Cecil John Rhodes had given the Catholic Church 10 000 hectares of Chief Chinamhora’s land to found Chishawasha Mission.

It is important to mention that by

66 000 hectares were allocated to the Catholic Church.

The reader is reminded that, notwithstanding the outrageous swindle, Father Richartz had proceeded to author the Catholic Church’s recommendation to massacre all Shona people above the age of 14.

And homosexual Rhodes’s response had been an instruction for the occupation forces to ‘kill everything black’, even under conditions of surrender.

The Church’s involvement in the rape of the land went back to providing the vital intelligence that enabled the invasion of Zimbabwe.

The missionary Robert Moffat had been the advance guard.

His son Reverend John Moffat, following in his tracks, had claimed Zimbabwe as a British sphere of influence.

It is him who had drafted the Moffat Treaty of 1888, the document that first ‘crowned’ King Lobengula the king of Mashonaland.

His own son, Howard Moffat, would be the second Prime Minister of Southern Rhodesia (1927-33) in what then translated to three generations of swindlers.

Another ‘sick’ man of the cloth, Reverend Helm, had been King Lobengula’s ‘trusted’ interpreter and counsel witness to the Rudd Concession, also ‘crowning’ King Lobengula the king of Mashonaland.

The black messiah rejected the racist’s ‘good news’ and refused to be baptised, a stance seemingly pre-disposed by her language kuti: “Mudzimu usiri wako unouraya.”

And that is what happened.

The callousness of the Catholic father’s account of the execution of Nehanda removes all doubt regarding the recommendation of genocide he had given to his homosexual paymaster:

“Nehanda called for her people and wanted to go back to her country Mazowe and die there … when I saw that nothing could be done with her, the time of the execution having arrived, I left Nehanda and went to Kaguvi who received me in good dispositions.

While I was conversing with him, Nehanda was taken to the scaffold.

Her cries and resistance when she was taken up the ladder, the screaming and yelling disturbed my conversation with Kaguvi very much, till the noisy opening of the trap door upon which she stood, followed by the heavy thud of her body as it fell made an end to the interruption.”

The hangman was Patrick Hayden.

In the case of Gumboreshumba, Kaguvi’s medium, the Catholic priest had brought in the medium’s daughter, a convert ‘hostaged’ in the ‘garrison’ mission at Chishawasha.

It was she who was tasked to help her father accept ‘the good news’ – accept Jesus as his ‘personal saviour’.

Gumboreshumba had witnessed Charwe rejecting Jesus Christ as her personal saviour and then getting hanged.

And it had made sense for him to accept the good news that, ‘Jesus had already died for him on the Cross’.

It had made sense for him to accept Jesus as his ‘personal saviour’ if only to save himself.

But he was wrong because immediately after he had accepted to be ‘saved’, he was baptised ‘Dismas’ the ‘good thief’ and he was handed over to Patrick Hayden, the hangman — and he was duly hanged.

Surely he had not expected his own death to have been the good news his own daughter had been brought in to persuade him to accept.

It is also not likely that Dziripi had known that the good news she was being asked to persuade her father to accept would leave her orphaned.

What happened to the mediums of Nehanda and Kaguvi in Salisbury on April 27 1898 casts the Catholic recommendation to massacre all Shona people above the age of 14 as more sinister than the sheer white supremacist blood-thirst that it seems.

It was an attempt to cut a victim people from their origins.