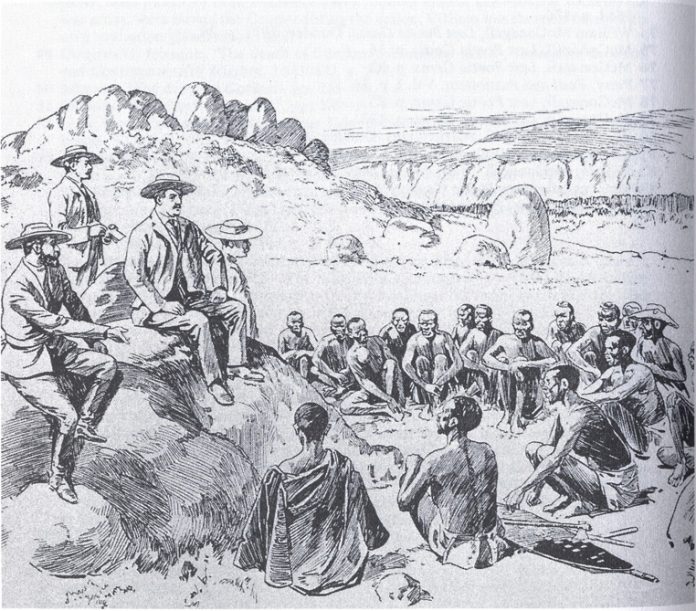 AT the first indaba in the Matopos (August 21 1896), Somabulana, the Matabele spokesperson had broken the first Patriotic Front formation by labelling his erstwhile Amahole and Shona comrades-in-arms, ‘dogs’.

“The Amaholi and the Mashona … what are they? Dogs! Sneaking cattle thieves! Slaves! But we the Amandabili, the sons of Kumalo, the Izulu, Children of the Stars; are no dogs! You came, you conquered. The strongest takes the land. We accepted your rule. We lived under you.” (Blake, 1977:138)

Ironically, Somabulana had himself refused the dog label when it was applied to his Ndebele people by racist Captain Heyman who had been Magistrate of Bulawayo. After the 1893 conquest of Matabeleland, the chief, who had in his own words, believed kuti ‘the strongest takes the land’ and accepted white rule had visited the white magistrate to pay his respects and had been ignored.

His complaint to Rhodes at the first indaba in the Matopos was:

“I came to Bulawayo early in the morning… I sat until the evening shadows were long.

And then … I sent again to the Chief Magistrate and told him that I did not wish to hurry him in any unmannerly way; I would wait his pleasure; but my people were hungry; and when the whitemen visited me it was custom to kill that they might eat.

The answer from the Chief Magistrate … was that the town was full of stray dogs; dog to dog; we might kill those and eat them if we could catch them.” (Ranger 1967:122)

The Zansi Chief had not liked the ‘dog’ label he thought was befitting to his erstwhile Amahole and Shona comrades-in-arms.

The Zansi Chief had inadvertently defined the unenviable fate of his Amahole and Shona comrades-in-arms in the Ndebele Kingdom he had wished to restore through the patriotic front they had forged to destroy a common enemy.

That Somabulana had spoken only for the true ‘Amandabili’, the sons of Kumalo, the Izulu, ‘children of the stars’ came to light at the second indaba in the Matopos (August 28 1896), when:

“A young chief who might best be described as insolent to the elders of his own tribe and particularly so to the white men put in a pertinent question.

‘Where are we to live when it’s over? The white man claims all the land’.

Rhodes replied at once, ‘We will give you settlements.

We will set apart locations for you; we will give you land’.

The young chief shouted angrily, ‘You will give us land in our own country! That’s good of you!’”

At the first indaba, ‘the Amandabili, the sons of Kumalo, the Izulu, children of the stars had laid down their arms before Rhodes.

At the second indaba, the young Amahole/Shona Chief had brought a gun, contrary to the official position.

And in those words, the young Amahole/Shona Chief had defined the position that would sustain the war for more than a year later in Mashonaland where Mkwati was headed.

After the second indaba, the true ‘Amandabili, the sons of Kumalo, the Izulu, children of the stars’ accepted gifts of tobacco, money, blankets, food and honorary positions in the British South Africa Company administration.

And that was the last nail in the coffin of the Ndebele Kingdom dream and the tribal chapter of the first Patriotic Front formation.

The war in Mashonaland, where Mkwati was headed, presented a critical permutation of the patriotic front that cannot be ignored.

David Lan would later describe it as, “…the ‘astonishing act of collaboration between ancestors and their descendants, the past and the present, the living and the dead.”

Because it was less conspicuous in Matabeleland, it was not the one broken at the indabas in the Matopos.

In that respect, Mashonaland presented a more complicated story.

There were no standing armies or regiments to speak of and the commanders were ancestral spirits operating through mediums.

The motivation and commitment to fighting were thus more complex than in Matabeleland.

For the occupation force, it would turn out to be a frustrating people’s war inviting no rewards for surrender.

It would end with executions, no peace talks and no agreed terms.

There would be no formal laying down of arms.

The ‘astonishing act of collaboration between ancestors and their descendants, the past and the present, the living and the dead’ translated to a culture shock for the white settler – a culture shock that completely debunked myths of Matabele fighting capacity versus Shona disorganisation, cowardice and fighting ineptitude.

The Moffat Treaty and Rudd Concessions now turned out to have been made with the wrong persons.

It presented an immediate view and comparison of Ndebele and Shona resilience.

In the longer historical context, the 1879 defeat of King Lobengula’s impis (under Lotshe and Manyewu) by the Mhari Chief Mazorodze at Nyaningwe Hill, as well as the more decisive defeats by Chinengundu Mashayamombe in 1887 and 1888 became unambiguous markers, not of chance events but an inexorable resurgence of Shona glory that would have submerged the Ndebele Kingdom had colonial occupation forces not intervened.

It was something the true ‘Amandabili, the sons of Kumalo, the Izulu, children of the stars’ needed to accept for a sustainable and more effective patriotic front formation against a common enemy.

They needed that and not a denigration of their erstwhile Amahole/Shona comrades-in-arms.