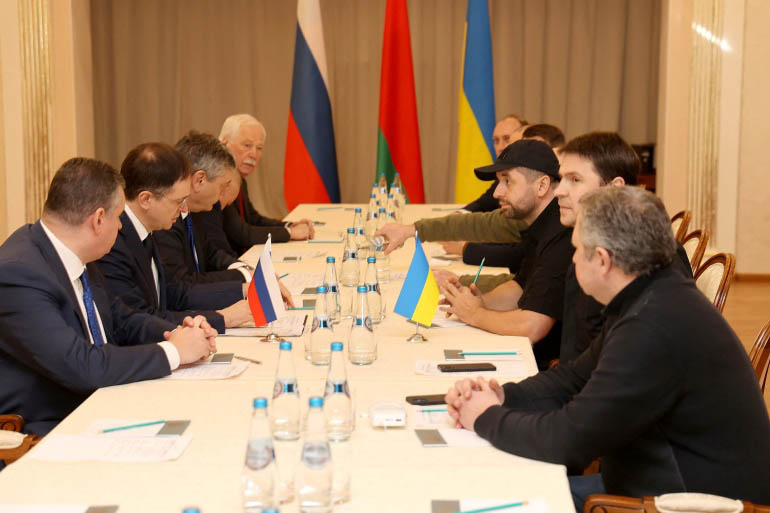 IN analysing the Russia-Ukraine conflict narratives, one cannot help but notice the conditioned perspectives of the Western ‘superpowers’ and ignored important details.

The world was brought to a standstill as news broke on February 24 2022 that Russia had invaded Ukraine, its neighbours to the south-west.

Under this development, explosions have been reported in several areas including the capital Kyiv and Kharkiv regions of Ukraine.

Black migrants are experiencing problems trying to cross borders, with the security in Ukraine prioritising white Ukrainians over black people.

The February 28 Ukraine-Russia talks ended without a breakthrough.

Ukraine has been receiving financial and military aid from the United States and Europe.

Reportage theorising Ukraine as a victim of Russia tends to dominate.

The escalating conflict is worthy analysing along the war-peace journalism perspectives.

Reportage not preferred by the elite

Russia considers Ukraine within its natural sphere of influence because of the history of Soviet Union and it has lost patience with regards to Ukraine’s closeness with the West and the prospects that the country might join NATO or the European Union.

Russia wants the process of adding more countries to NATO to cease, insisting that Ukraine cannot be a member of that grouping as it will mean that NATO’s defense systems will be placed in Ukraine facing Russia, thus becoming a threat to its security.

It is like having a Russian defense system pegged in Mexico and expect the US to have no qualms about it.

The elite reportage, however, prefers to stay away from Russian demands.

Writer Jack F. Matlock Jr, on February 15 2022, in an article ‘responsible statecraft’ had this to say:

“I was there: NATO and the origins of the Ukraine crisis. After the fall of the Soviet Union, I told the Senate that expansion would lead us to where we are today.”

“Putin (demands that) the process of adding new members to NATO cease and that Russia has assurance that Ukraine and Georgia will never be members.

Such a narrative is not found in mainstream reportage.

In these unwanted narratives also is the point of view of a United States anti-war activist and theorist Professor Noam Chomsky arguing:

“Why did NATO even exist after 1990? Track the whole history of the cold war (it says) NATO is necessarily to defend Western Europe from the Russian world… NATO expands to the East …its mission changed …to control global energy system… and to serve US… intervention force… If the purpose was to defend the West from Russia, why is it expanding… For Ukraine to be included in NATO would be a very serious threat for Russia…”

Western media reportage does not dwell on causes.

Ukraine-Russia conflict is rooted in interpretations of history that are deliberately ignored by war journalism which is racist in nature.

Johan Galtung in his identification of peace journalism and war journalism calls war journalism the gathering and dissemination of conflict news with a bias towards ascendant views of the modern state system embodied in propaganda semantics.

Media footage and reportage of war journalism preserve the elite status quo as well as their commercial and political interests at the expense of the vulnerable by insisting on what those at the top are saying is right and not any other view.

For example, the West, which strongly opposes Russia’s advance, through CNN and BBC continues to deliver narratives condemning Russia.

Narratives that dwell on differences that seek to establish Russia as uncivilised; creating a division between the ‘civilised’ ‘us’ and the barbaric ‘them’.

In such reportage, the US President Joe Biden is quoted saying:

“Putin is an aggressor … and now he and his country will face the consequences.”

UK Prime Minister Boris Johnson had this to say:

“Now we see him for what he is, a blood stained aggressor.”

Johnson also condemned the military tactics used by the Russians as ‘barbaric’.

“It is clear that Vladimir Putin is prepared to use barbaric and indiscriminate tactics against innocent civilians, to bomb tower blocks, to send missiles into tower blocks, to kill children as we are seeing in increasing numbers,” said Johnson.

Consequently, this kind of reporting is reactive because it takes interest only after something has happened.

Whether the media producers are aware of it or not, news coverage often serves to encourage perceptions of conflicts that are elite-centered and in essence, war fueling.

As an alternative to war journalism is peace journalism, which involves making conscious choices (in reporting on a conflict) to highlight factors which are believed to promote peace, without demonisation language.

Peace journalism explores conflict formation and attempts to explore the issue from a grassroot level; taking focus off the elite and giving voice to all parties, including those who might not be able to directly affect the outcome but are affected.

And the ongoing Western reportage on the Rusian-Ukraine conflict has exhibited very few characteristics of peace journalism.

As if the US has a moral or legal authority to sanction anyone, the US and the UK both announced another round of sanctions targeting Russia:

“We are united with our international allies and partners to ensure Russia pays a severe economic and diplomatic price for its further invasion of Ukraine,” declared US Treasury Secretary Janet L. Yellen on February 25 2022.

“This is (going to) impose severe cost on Russian economy immediately and over time. We are purposed on designing these sanctions to maximise long term impact on Russia and minimise the impact on United States and our allies,” added US president Biden.

It is unfortunate that the US which has a history of invading countries such as Iraq, Afghanistan, Libya, wants to stand on a high moral ground.