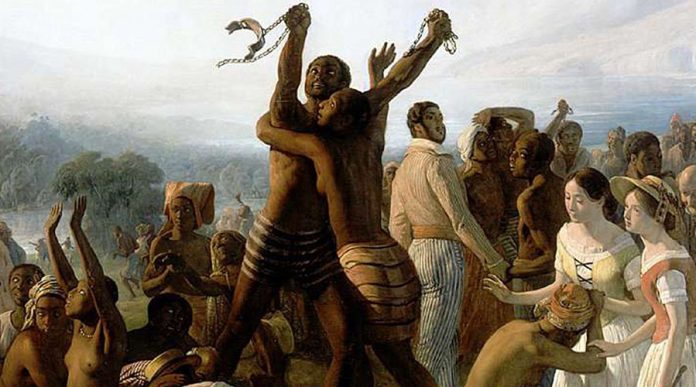 THE US was first inhabited by blacks who made up the ancient tribes of the Olmecs, Washitaw, Maya, Yamasee and others.

Later they were joined by a Mongol contribution from the Far East which crossed the Bering Strait into North America and trekked south.

These would eventually be known as the Red Indians.

The ancient artefacts of the Americas, such as the colossal Olmec heads, depicted black people.

This was also the case with ancient rock paintings found in places like the Bonampak Temple which showed dreadlocked blacks in positions of renown and also portraying the general populace as black people.

Mythical and messianic figures, like Kukulcan or the Quetzalcoatl, were depicted as tall African type people with dreadlocks, large facial features and dark skin. After scrutinising the nomadic and bush culture of the Red Indians who are now portrayed as the sole natives or indigenes of America, it becomes clear that they were in fact not the builders of ancient American monuments like Tikal which they found already in existence and possibly in a state of ruins by the time they arrived.

When the Europeans eventually entered the Americas in 1492 CE, Christopher Columbus reported encountering what he called the people of the Queen of Sheba.

He described them as negros and gave detailed descriptions of their spears which had gold tips called ‘guanine’.

The conquistadors followed and depopulated the land of these people who they also enslaved and sold to slave markets in Europe, particularly Spain.

At a market called Seville, Yamasee Indians were sold as negros, which is evidence that the indigenes of the US were blacks.

These blacks were targeted for extermination because they resembled the Moors at a time they were undergoing expulsion and ethnic cleansing in Europe. Many of the black-Americans then fled south-west and the so-called Red Indians remained.

The Red Indians were not as hated, owing to their light skin colour, but they were also less preferable as slaves because they were not as strong and laborious as the blacks the whites had depopulated.

From this problem came a solution that was proffered by Columbus’s own son.

This was to kidnap and ship blacks to work as slaves in Europe and the Americas.

Once the slave trade began, the indigene blacks of the US would be painted with the same brush as the African captives and have their history and identity forever associated with enslavement.

Their former glory, which is evident in stone temples and statues, is now being ignored just as much as that of the African captives whose ancestors built the ancient pyramids in Egypt.

Their legacy is attributed to the Mongols who were less populous, less complicated and less prestigious than groups such as the Maya, just as the legacy of Egypt is attributed to its current inhabitants who are of Turkish ancestry.

In both cases, it is the whites who are authors of these lies and they reinforce this sophistry in people’s minds through portraying indigenous Americans and ancient Egyptians as other races besides blacks.

The Spanish began colonising America and they brought with them the Portuguese, Greeks and Italians. They named the land Amalek, after an infamous ancestor of the Greeks whose name and notoriety in both the past and the distant future was written in the Bible.

The Dutch followed along with the British and the French and, separately, these European groups subdued the land from Alaska to South America.

In the 19th Century, numerous Chinese people were contracted to build railway lines in the US.

This is how many Chinese-Americans entered the land. Besides their vital contribution to the US economy, the Chinese were ill-treated by the white community of the US.

They were mocked for looking and talking different and, to this day, many of them feel alienated though they may have been Americans for generations.

Thus, the US is a nation of immigrants, built at the expense of not only its indigenes, but Africans and Asians.

Australia, New Zealand and Tasmania were occupied by prisoners from Britain who had overcrowded the prisons in their homeland.

Similarly, the US was first occupied by conquistadors who were mostly desperate South Europeans with nothing to lose and were thus called desperados.

Later the Anglo Saxons followed, fleeing from religious persecution in Europe and hoping to enjoy freedoms they had not before enjoyed in their homeland.

Is it any wonder the US’ system of governance, namely ‘democracy’, is centred on letting people do as much as they please, even if it violates the codes of decency and humaneness that are upheld in Asia and Africa.

In many parts of the US, a man can copulate with another man without any consequences.

A man can decide to be other than a man and undergo surgery and other aesthetic modifications to look like a woman.

The former Olympian, Bruce Jenner, now calls himself Cathleen Jenner and dresses like a woman.

Instead of being ridiculed for this, he received awards for being courageous.

Basketball player Dwayne Wade and his wife Actress Gabriella Union have openly allowed their son to identify himself as a girl.

South African actress Charlize Theron has gone to the extent of adopting African babies and letting them identify themselves as girls yet they were born male.

These are things that many of us find very disturbing, yet they are practised openly and celebrated in places like the US and Australia where descendants of lawless whites took over the land.

As if corrupting those lands is not enough, whites go further to try and spoil Asia and Africa by spreading their ‘democracy dogma’ through film, media, NGO activities, miseducation and so-called evangelism.

Our youths are being influenced negatively by this Western media because they are impressionable.

How many NGOs have tried to promote abortion, gay rights and feminism with sinister objectives?

All these measures are meant to limit the growth of African and Asian populations.

Abortions allow people to reverse the conception of life, thus, it is murder.

Homosexuality is not procreative and Western women rights have been packaged to ultimately set a limit to the amount of children they wish to produce.

Coupled with these movements are family planning schemes that overly favour the use of contraceptives and are obsessed about reducing the birth rate.

Bill Gates, who is one of the richest men in the world, openly supports this initiative to decrease the population in Africa and sees it as a way of reducing world poverty.

We have enough land and resources in Africa to grow our populations 100-fold before it even becomes necessary to employ some of these family planning measures.

God said be fruitful and multiply.

As it turns out, Africa needs a huge population boost for it to become other than a Third World continent. Zimbabwe alone has a population of about 15 million yet it is much larger than the UK which has an excess of 60 million people.

The bigger the population, the greater the labour force, market and demand for production.

The city of Shanghai in China has over 30 million people and today, it stands as one of the most organised and advanced cities in the world.