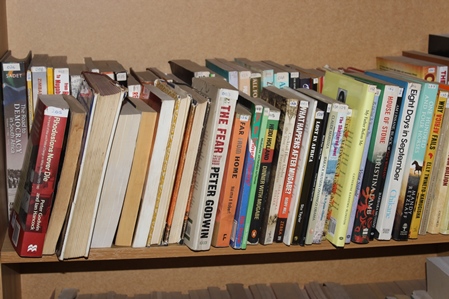 GOING through the books reviewed by The Patriot in 2015, I realise most of those writing about the liberation struggle that we won are Rhodesians we defeated.
Local bookshelves must not be awash with literature written by Rhodesians.
They are stealing our thunder.
After all it is the victors who should tell the tale.
But before I blame them for hijacking our story, let me remind you of the words of renowned African writer Chinua Achebe: “If you do not like someone’s story, write your own.”
As impolite as Achebe’s words may sound, they are indeed true. We cannot continue to be angered by the whiteman’s distortion of our story when we are doing nothing about it.
For how long should we sit back and have our story told by interlopers?
It is our story, our narrative.
Let us not forget that.
Books have been written celebrating the white man’s ‘paradise’ of Rhodesia, heaping praises on its architects like Cecil John Rhodes and Ian Smith.
Among the books reviewed were Rhodesians Never Die penned by Peter Godwin and Ian Hancock, Charlton Chesterton’s The Real Case for Rhodesia, Paget of Rhodesia (A memoir of Edward, 5th Bishop of Mashonaland) by Geoffrey Gibbon, Perhaps Tomorrow by Tom Wigglesworth, One Man’s Vision penned by Rhodesian journalist-cum-writer W.D. Gale, Out of Shadow by Jason Wallace and The Reluctant President (The Memoirs of the Hon Clifford Dupont) by Clifford Dupont.
These narratives give an insight into the mind of a typical Rhodesian and shows why the Rhodesians were determined to rule ‘forever’ in this beautiful country.
To the Rhodies, the white man is the future of the country and without him it is doomed as only whites can steer ‘development’.
But is this true?
It is not, but this is the message the world is reading.
It is these books that will remain for years to come and future generations will use them as points of reference.
It is refreshing, however, to note that there are indigenes who have taken it upon themselves to tell the Zimbabwean story.
Kudos to writers such as Freedom Nyamubaya and Dr Ireen Mahamba who wrote the book Ndangariro and Professor Charles Pfukwa who penned A Moment in Time, among others.
These cadres, having taken part in the liberation struggle, saw it fit to put their experiences on paper.
That way others may know more about the struggle.
It was also heartening to read the book, Rhodesia File by one of Africa’s great statesmen and founding father Kwame Nkrumah which is a compilation of statements and writings on Rhodesia and problems relating to the liberation of Southern Africa.
In as much as those who experienced the liberation struggle are called on to write about their experiences, the accounts should not be reduced to personal ‘wars’.
It is the story of Zimbabwe they must tell without seeking to fulfil or settle personal scores.
They owe it to us and future generations to put aside personal vendettas and give us the real liberation struggle story, not one laden with malice and falsified facts to boost their egos.
This was the case with Edgar Tekere’s A Lifetime of Struggle published by SAPES Trust.
After reading A Lifetime of Struggle not only was I left disappointed but also worried about how easily our history was being manipulated to advance personal agendas.
The book was published after the author had fallen out with ZANU PF and one can pick out that his accounts of the liberation struggle were now clouded by emotions, he was hitting back at the party which he felt ‘abandoned’ him.
These are not the kinds of stories that help and enlighten future generations.
How different are they from the distorted versions by the Rhodesians.
The onus is on us to be true to ourselves and tell the real Zimbabwean story.
Achebe once said: “My weapon is literature.” Let us also, like the whiteman, use literature to tell our story and preserve our history.
To those who participated in the liberation struggle, where are your memoirs?
To the younger generations enjoying the fruits of independence, where are your accounts?
As the years go by I hope more books from seasoned and upcoming writers will be written to celebrate our country and our heroes.