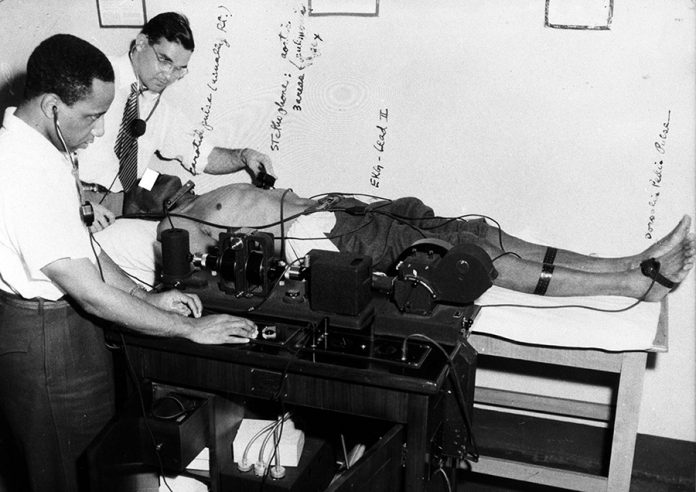 GUINEA PIGS and mice are often used in medical laboratories where they are called lab rats.

Before medicines can be administered to humans, they need, by law, to be tested on such mammalian animals for effectiveness, side effects and so on.

In the 1930s, the US faced an economic recession called the ‘Great Depression’.

During that period, there was a Government-led public service medical experimentation programme being undertaken in Tuskegee, Alabama.

The study was on the sexually transmitted disease called syphilis.

What was unusual about this particular medical study was that black people were used as guinea pigs.

Poor blacks from around Alabama, about 600 in total, were put together for the experiment which was called the Tuskegee Syphilis Study.

It’s said about 400 of them had syphilis, some prior to the experiment while others were manually infected with it.

The other 200 were the controlled group without syphilis.

The objective was to let the disease take full effect until each patient died.

Postmortems would then be done to measure the extent of the damage the disease would have caused.

Besides assessing its effect on humans, the exclusive selection of blacks was to see if there was a difference in the disease’s effects as it pertained to race.

Syphilis can be treated by antibiotics like benzathine benzyl-penicillin or doxycycline.

But these poor blacks were required to undergo all the signs, symptoms and stages of the infection without receiving any medication.

Syphilis, if left untreated, will go from the primary stage which begins with small erosions which mature into ulcers on the sexual organ.

After three months of non-treatment, this could advance to the secondary stage which is more telling.

This manifests in various forms, including severe rashes which also occur on palms and soles, besides the body.

Latent syphilis occurs one or two years after suffering from secondary syphilis.

This could be asymptomatic but remains contagious, especially in its early stages.

The tertiary stage occurs three-to-15 years after contracting the disease without receiving treatment.

This is a chronic level which has stages of its own; namely gummatous, neuro and cardiovascular syphilis.

The head could enlarge, so can organs and limbs like the eyes, nose and so on.

The internal damage is even more devastating.

Over a third of long-term untreated syphilis patients reach this dreadful stage of tertiary syphilis.

One can then imagine the horror that these blacks who were deliberately infected and left untreated underwent.

These blacks were not quarantined but left to get on with their lives.

They married and conceived children, in the process infecting their spouses and offspring.

Babies born to infected mothers get congenital syphilis and their quality of life from birth will be heavily compromised.

Miscarriages are often common when pregnant women are infected.

The study went on, unquestioned and unhindered, for four decades.

That was until an Associated Press reporter named Jean Heller blew the whistle in a 1972 article  which would later win the Robert F. Kennedy Journalism Award for outstanding coverage  of the problems of the disadvantaged.

Were it not for this, the Tuskegee Syphilis Study would have carried on without ever coming to light.

Heller is a white female reporter who was shocked to find out that many other whites had known about the degrading experiment but chose not to expose it.

She felt that upon encountering such horrific information, it was a social duty for the discoverer to present it to the public.

Failure to do so warrants culpability.

Bill Clinton apologised during his term as President; for the suffering the US Government caused the victims, namely the black patients as well as the friends and relatives they infected.

Though the few known survivors of the deadly experiment received millions in reparation packages from the US Government, films depicting the whole ordeal were produced and aired.

The racist and near genocidal scheme has not made its way into syllabi around schools in Africa.

This qualifies as both black and white history; documenting the whiteman’s inhuman character in reducing blacks into lab rats and the blackman’s suffering therein.

What was the full extent of their scheme if left unhindered?

Was it to let the disease self-replicate into epidemic levels around black communities in the US?

Their conclusion was that syphilis affects every one in similar ways and race had no impact on the extent of its severity on humans.

Syphilis and other sexually transmitted diseases have a  high prevalence in black communities in the US and around the world.

After hearing evidence of such foul play, is it farfetched to suspect that the introduction and spread of diseases we see today might be from similar experiments to that of Tuskegee.

The Tuskegee Syphilis Study is the one that was exposed.

How many other experiments of such a nature took place and were directly targeted at blacks?

Most people, even blacks, excuse such factual history as mere conspiracy theories, considering their unthinkable cruelty.

Well, here is one case they cannot refute!

The US Government led biological warfare against the poor blacks of Alabama.

This is reminiscent of the plot that Peter Botha highlighted as President of apartheid South Africa in 1985.

The plans to decrease fertility in blacks and limit their population through sexually transmitted diseases.

This, they said, would spread to influential and common blacks by way of European prostitutes who would be made carriers.

Essentially, the Tuskegee study was used to enrich the US’ understanding of syphilis’s long-term effects on humans.

But let this not assuage their conscience into justifying that at least the victims suffered for the cause of science.

That is the job for lesser mammalian animals, not blacks.

Putting blacks on this experiment showed that the US Government perceived them as something lesser than human and this was less than 90 years ago.

The US already once used black slaves to work their farms and industries.

It used the black prison population and Chinese people to build its rail networks.

Reports of black children being used by white skin hunters to bait alligators were made during the slave period.

White Australians used the Japanese to dive for pearls as it was risky work.

And in Africa, black villagers are given weapons and chemicals by foreigners to poach for ivory, rhino horns and so on because they are familiar with the land and animals.

They risk up to 70 years imprisonment if caught, yet their foreign employers do not even get a day in court.

All the above cases are evidence of the predatory and parasitic nature of whites.