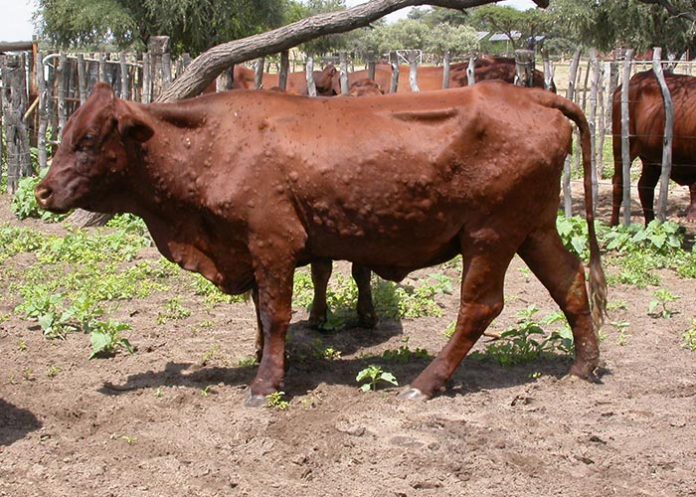 ALTHOUGH globally skin diseases are very common in cattle, there is insufficient literature on significance to seriousness of alopecia and dermatitis in bovine animals and the necessary treatment,  more so in Zimbabwe.

Bovine skin diseases such as those known in the indigenous vernacular as zvisasa nezvironda (fungal infection) can greatly affect cattle leading to decreased income and national economies through reduced production and performance as well as irreparable damage to the hide.

Scratching and alopecia are among the most common signs of skin disease in cattle. Causes include ectoparasites, bacteria, viruses, external irritants, allergic reactions, fungi and trauma, also, though rarely, autoimmune conditions. These conditions are prevalent during October to February, in the southern regions of Africa during the hot and wet summer season that we are currently experiencing in Zimbabwe.

To counter these skin conditions, Ivermectin is recommended as an endectocide and povidone iodine as antiseptic/anti-microbial. Although these chemical based solutions are widely-known and used, they have nonetheless not yet proved to be the most effective therapy.

In fact, an alarming number of bacterial species have developed antibiotic resistance and one of greatest concerns over the past years has been S. aureus causing notable skin disease.

While there is no specific, economical and successful treatment regimen for known cattle skin diseases, to resolve such problems an alternative medicinal regimen has been successfully tried in Tamil Nadu, India, which, since it proved successful for them, has been recommended.

Over a four-month period, in the Indian state of Tamil Nadu, 52 cattle of different breeds, age and sex, that displayed cases of severe body-rubbing against hard objects and hair loss in bunches, were clinically examined and found to be affected by multi-focal alopecia, pyoderma, and polypnea in some cases.

Of the 52 cattle, six cattle were kept as control specimen receiving no treatment. A group of 10 cattle (group A), were administered ivermectin subcutaneously once only and povidone iodine (barrier cream) ointment was applied externally for seven days.

Though there was no recovery noticed in the control group of 6, the cattle in group A and B showed 30 percent and 89 percent rate of recovery respectively.

Treatment for the cattle’s skin diseases were reported as follows:

Cattle in Group B were treated with herbal preparation containing palm jaggery 1.5 kg, common salt 100g and sesamum indicum seeds 100gm – ground and mixed altogether into a paste, to which one litre buffalo ghee and juice extract from 10 citrus limon blended together. Approximately 300gm of this mixture was administered orally per day, for seven days.

The results showed the control animals exhibited no recovery. In group A, three cattle showed improvement.

Recovery in group B was noticeable from the fourth day onwards, and 32 cattle recovered completely by the seventh day of the treatment.

Palm jaggery – a course brown sugar made in the East Indies from the sap of the date palm; used as a base that provides palatability of the admixture, the fresh sap of palmyra palm (murara) is a laxative and the jaggery is a mild stimulant.

Oral table salt intake is reported to have a sort of defence mechanism against the highly toxic protein disintegration products which occur in pemphigus.

The seeds possess potent antioxidant effect due to the presence of sesamol.

They are also effective against acaricide-resistant-tick infestation in cattle when applied topically.

Buffalo ghee (mafuta enyathi) is rich in vitamin D, which promotes healthy and rapid healing of the skin.

It helps improve skin complexion and quality. Buffalo ghee is also used as an ingredient in treating leprosy and skin diseases.

The recent research undertaken in India anchoring alternative medicine found promising results for skin diseases in cattle that can be economical and cost-effective, requires further validation and standardisation with a view towards integrating it into conventional veterinary medicine.

Focussing on Zimbabwe, there are many alternatives such as the aloes, (gavakava) — for instance the Dwala aloe, one of the most widespread species in the country, is known for its healing properties.

If readers are aware of other herbal cures to treat cattle, kindly advise this writer at: tonym.MONDA@gmail.com.

Dr Tony Monda holds a PhD in Art Theory and Philosophy and a DBA (Doctorate in Business Administration) and Post-Colonial Heritage Studies. He is a writer, lecturer and a specialist post-colonial scholar, Zimbabwean socio-economic analyst and researcher. E-mail: tonym.MONDA@gmail.com