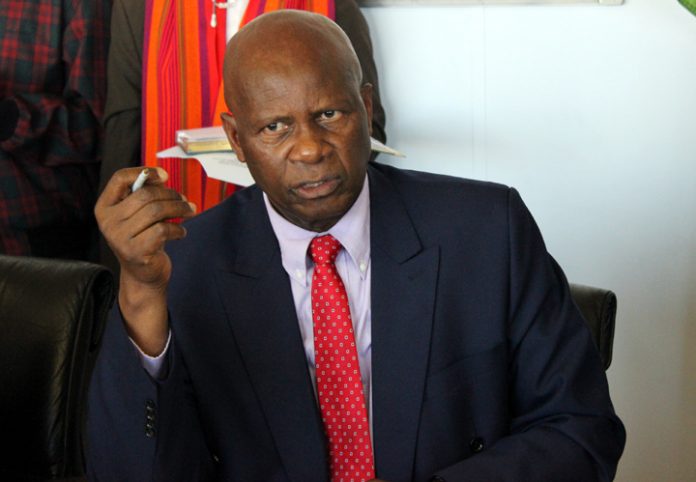 FINANCE and Economic Development Minister Patrick Chinamasa last week led a high-powered delegation to London.
The Zimbabwean delegation consisted of Minister of Mines and Mining Development Walter Chidhakwa, Minister of Industry and Commerce Mike Bimha, Minister of Macro-Economic Planning and Investment Promotion Obert Mpofu and Reserve Bank of Zimbabwe (RBZ) Governor Dr John Mangudya.
In London, Minister Chinamasa addressed a conference on Zimbabwe, presenting the economic situation in the country as well as its prospects against the background of efforts to re-engage the international community and repay outstanding debts.
This was Zimbabwe’s first high level investment conference in the British capital, London, in nearly two decades.
The conference was organised by Africa Confidential, a continental-focused information group.
The conference ran under the theme: ‘Zimbabwe 2016, Rebuilding and Rebooting’.
It was an important meeting which made it clear both parties cannot do without the other.
Relations between Harare and London have been frosty following the Land Reform Programme in 2000 which saw over
400 000 households getting farmland which was previously owned by a mere
4 000 whites.
In retaliation, Britain urged the European Union (EU) to impose economic sanctions against Zimbabwe.
The sanctions have cost Zimbabwe over US$42 billion in potential revenue over the past 16 years.
Minister Chinamasa did not mince his words when he said Britain and Zimbabwe need each other and that Harare is open for business with London.
But for the re-engagement to be successful, Britain must stop setting conditions in their favour and completely remove sanctions.
In the past year, Britain said it wants to normalise relations with the State of Zimbabwe, not the Head of State.
They refused to remove travel bans on President Robert Mugabe and his wife Dr Grace Mugabe.
Addressing the conference in London, Minister Chinamasa said there is need for the two countries to move away from the early 2000s stand-off.
“Let’s not remain in the past,” said Minister Chinamasa.
“We cannot move forward by remaining in the past.
“Yes, the British felt offended by the land reform, but they cannot wish Zimbabwe away.
“We have a long history together and they cannot pretend that they do not know us.”
Chinamasa said while other countries like France and Germany were seemingly expressing interest in re-engaging Zimbabwe, British investors were somehow ‘fence-sitting’, taking a cue from their government.
“For as long as there are sanctions we cannot move forward,” said Minister Chinamasa.
“As it is, I cannot come to the UK and not face problems.
“I come and I am detained; I was detained at the airport.
“I was taken aback because I thought the sanctions had been lifted; those little things really matter and let’s sort that out.”
Bilateral trade between Zimbabwe and Britain improved to US$73,6 million in the eight months to August last year compared to US$43 million from the previous year.
And between 2014 and 2015, there has been two UK trade missions to Zimbabwe.
On the plan to clear arrears, Minister Chinamasa said Zimbabwe hopes to get its proposal to clear debt arrears with multilateral lenders signed off by December, enabling it to start talks with bilateral sovereign lenders.
Zimbabwe is currently re-engaging with multi-lateral institutions in a bid to end more than a decade-and-a-half of financial isolation.
The country is working on a plan to clear US$1,8 billion owed to the Bretton Woods Institutions and the African Development Bank.
“We are looking forward to the three multi-lateral lenders to formally adopt our debt clearance strategy when they meet in December,” said Minister Chinamasa, adding that he expected this to be a ‘done deal’.
Minister Chinamasa said the discourse and dialogue is that alongside clearance, there should be reciprocal commitment from the institutions to provide Zimbabwe new money to support sectors of the economy, with agriculture being top priority.
“The clearance of arrears alone is not enough,” he said.
“In fact it will leave Zimbabwe in a worse-off position.
“What we want is to grow the economy and bring it back to where it can meet its obligations.
“So the discussion we are currently having is that alongside clearing of arrears, we are negotiating for a country financing programme.
“Top of the agenda of the programme would be agriculture.”
Dr Mangudya told the same conference that Zimbabwe’s problems would be resolved if it clears its arrears and successfully completes its re-engagement programme.
“The issue with Zimbabwe is very simple,” he said.
“We need to complete re-engagement process to make the country a better investment destination.
“The first plan is the clearing of arrears (US$1,8 billion) to the African Development Bank, the International Monetary Fund and the World Bank.
“Those arrears have not been paid since 2000 and since then, the country has suffered a trauma of isolation and we want to remove that trauma through engagement.”