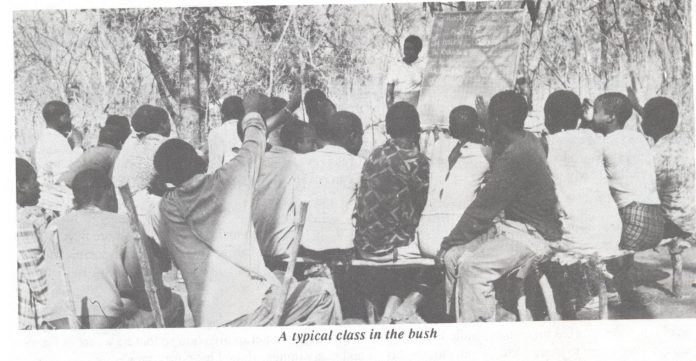 CDE Dzingai Mutumbuka had told the children and youths from schools in the liberation struggle, while they were still temporarily encamped at Nyamapanda Border Post that they would not be dispersed, but would remain together in new schools in Zimbabwe, so that they would pioneer a new and revolutionary education system for the country they had liberated.

This did not refer to the boys and girls from Matenje or Mavhudzi bases only, but to all those who had been in schools in the struggle.

From the Nyamapanda Border Post, those from Matenje Base who we are focusing on this week, were taken to Nyadire Mission, where they stayed for a few weeks while the Minister of Education and Culture, Cde Mutumbuka, was busy locating a suitable farm, where they could be settled so they could continue their revolutionary work.

In a few weeks they were moved to a most suitable farm for the new revolutionary education.

Kemphaven, a 835 hectare farm abandoned by a Rhodesian, had been secured for them.

It had a dam though the farmer had blown it before abandoning it.

The land was suitable for agriculture.

The dam had won Cde Mutumbuka’s heart, for he had far reaching plans for engaging the students in education with production and in this, agriculture had an important role to play. He was right.

The students and the land did not disappoint.

This became the new settlement for both primary and secondary school classes.

Yes, at the beginning students lived under conditions in some ways similar to hardships they had faced in Mozambique.

They lived in tents, cooked their own food in drums and still learned under trees.

The main difference, however, was that there were no food shortages, medical care was assured and they had plenty of instruments of production unlike in Mozambique.

These difficult conditions were not accidental or incidental.

It was a decision taken by the party, ZANU, to protect and secure the revolutionary spirit cultured in the students during the liberation struggle, the spirit of self-reliance, mastering the natural environment to secure their means of livelihood, so that this spirit would spread to the rest of Zimbabwe’s youths.

The party’s thinking on this was explicated at the opening of Chindunduma School in October in 1981 by the then Prime Minister Cde Robert Mugabe:

“An anti-climax indeed it seemed – but such is the manner in which our party has operated and survived.

“We decided in the prevailing circumstances to become as much our own educators as we had become our own liberators.

“By departing from the traditional methods of building Government schools, where the Government does everything and pupils and teachers just move in, the party in Government, sought to prove the thesis of integrating theory and practice, idea and action can be seen in practice.”

Chindunduma at Kamphaven proved the party right, that indeed the revolutionary work that had successfully started in Mozambique could be effectively translated into Zimbabwe. Construction of the school had started in September 1980. Students, teachers, community members from the local resettlement areas, volunteers from the Danish Aid from People to People (DAPP) and members from the New National Army of Zimbabwe combined their hands to mould bricks for the project, to dig the foundation and Government moved in with more expert labour where necessary.

At weekends Cde Mutumbuka joined the ‘Building Brigade.’ This cooperative effort was a resounding success.

Within a year, 48 classrooms, student and teacher accommodation were ready.

The largest school in the country, with the capacity to accommodate 1 500 pupils was ready.

This was the legacy of Matenje.

They had done it.

“The former bars had been converted into workshops for carpentry, metalwork and sewing. Maize, groundnuts, and cotton were planted as cash crops that would generate an income for the school.” (ZIMFEP:2002).

The yield for the first year was as follows: 600 tonnes of maize, 280 bales of cotton and 22 tonnes of groundnuts.

The school had 15 dairy cattle, providing milk for the school’s consumption as well as chickens for students’ consumption.

Education with production flourished at the school.

The students were involved in fish farming at the school, providing an additional source of protein in their diet.

In their woodwork classes, the students built a boat to use in the fishing project.

They also produced wooden doors and scotch-carts, which were in high demand in the Umfurudzi Resettlement Scheme.

In Metal work, the students produced window frames, which were used in the school and also in the local community.

They also produced hoes and small stoves, which were sold to the local community as well.

School uniforms for the school came from the sewing workshop, which also sold uniforms to surrounding schools.

Chindunduma was a success story.

The secondary school later moved to a new site at Chiruma Farm which is near Kemphaven Farm.

The party had been correct, the seeds for a new revolutionary education system had been sown in the Zimbabwe soil and they had flourished.

The young comrades from the struggle, who had been their own liberators had become their own educators and succeeded beyond expectation.

The founding fathers of the party had been correct.

Kisswell a graduate of Chindunduma Primary School demonstrates the extent to which Education with Production empowered the students:

“We were building our school, and we were growing groundnuts and selling them.

“In Grade Three we did electricity, in Grade Five building, woodwork in Grade Six, and metal work in Grade Seven. In my home area I built my mother a house.” (ZIMFEP:2002).