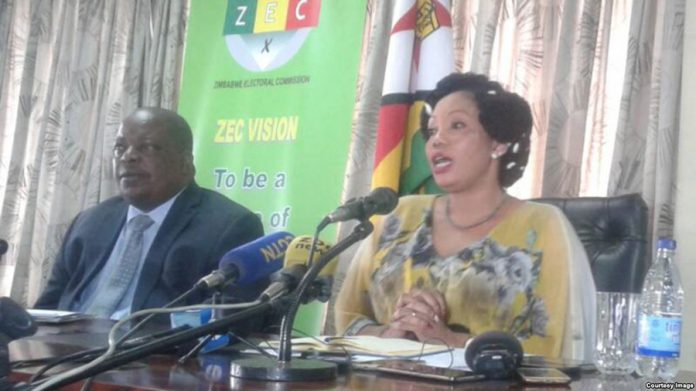 IT is the aim of this article to show that all the hullabaloo by the MDC Alliance is the usual nuisance made by crybabies the world over and should not be taken seriously.
Instead, ZANU PF should simply concentrate on putting up a professional campaign in order for them to win a landslide victory come July 30 2018.
Below we look at some of the trivial things that have made the MDC Alliance cry day and night instead of concentrating on their own election campaign.
To start with, the MDC Alliance took their crying to the Chairperson of the Zimbabwe Electoral Commission( ZEC), Priscilla Chigumba.
Does the MDC-Alliance have a problem with ladies!
Here is one of the best public administrators ever, this lady Chigumba, but the MDC Alliance, in an effort to undermine her administration, day-in-day-out cry about one trivial issue after another concerning how she is running ZEC.
First they cried about the use of the BVR system in this year’s general elections.
Asked what particular problem they had with the BVR system, they simply twiddled their thumps and could not pinpoint any fault in the system.
In the end, they accepted BVR in this year’s elections.
After this, we all thought Chigumba was going to have a break, but that was not to be.
Once the BVR issue was over and the voters’ roll was produced, the MDC Alliance crying turned into wailing.
They demanded that they be given the voters’ roll with pictures.
They wanted the entire voters’ roll with pictures of all voters from Muzarabani, Hauna, Tsholotsho, Chipinge, Kariba, Gokwe, Bikita and Beitbridge.
Yes, every voter in Zimbabwe.
In the end, the MDC Alliance were told to see sense and then informed there will be pictures at polling stations of those voting at that particular polling station.
On hearing this, they stopped crying, but before the sun had even set, they begun crying again, this time loudly.
“We want the ballot paper to be printed by the printers we like and we also want to stand near the printer when it is printing the ballot paper,” they said.
There is no doubt the MDC Alliance wanted ballot papers to be printed by their printers. How can the MDC Alliance be allowed to sacrifice everyone’s security simply to please their schoolboy egos.
That they were allowed to witness the printing of the ballot papers was more than enough.
Related to the printing of ballot papers is this mother of all political nonsense:
That the MDC Alliance should help design the ballot paper to avoid President Emmerson Mnangagwa getting the number one spot.
Now here is ultra democracy at its worst.That everyone in Zimbabwe should be the chairperson of ZEC at the same time.
That President Mnangagwa should be stripped of everything associated with his office.
Yes, that he must now go to work riding a bicycle because some people in Zimbabwe ride bicycles to work.
What political nonsense is this?
Chigumba and ZEC should be left to do their work without undue influence from the MDC Alliance.
They are professionals who should be left alone.
Lastly, the MDC Alliance has accused ZEC of employing former soldiers.
The question is what is wrong with employing a former soldier.
ZEC is not in the business of conducting wars but elections.
It is not NATO.
ZEC is not going to embark on a military campaign to invade the UK or Canada or Australia where the military expertise of the former soldiers will come handy.
No, ZEC is an ordinary civilian organisation with not a simple gun to its name.
Therefore, the military knowledge of the former soldiers who have been employed by it is useless to ZEC.
It’s important to emphasise that ZEC is not a military outfit.
Therefore, the existence of former soldiers in ZEC is no different from the existence of teachers there.
Which brings us to the MDC Alliance themselves.
Why is the MDC Alliance leadership monopolised by lawyers?
Advocate Chamisa, Professor of Law Welshman Ncube, Tendai Biti – lawyer, Jacob Mafume and lawyer Douglas Mwonzora, ad infinitum.
It is common knowledge that lawyers know the law more than many of us.
Was the MDC Alliance leadership of lawyers put together to manipulate the legal system in the country using the many lawyers they have at the helm of their party?
Food for thought!