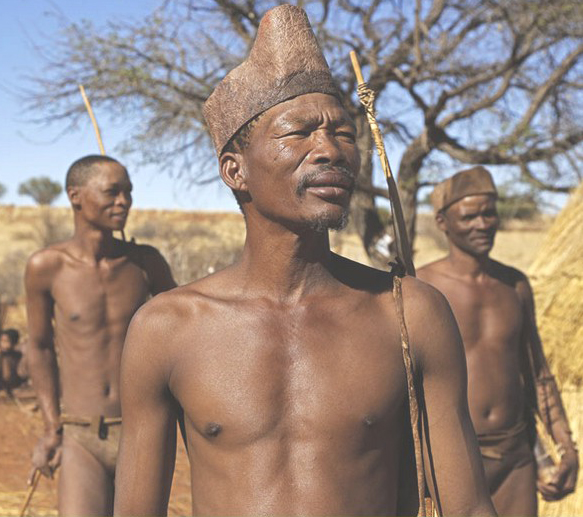 AFTER a war, the victor gets to tell his version of the story.

Oftentimes, the victor distorts history, sneaking in exaggerations in the narratives.

Future generations will consider the records of what transpired to be facts of history.

But are the claims objective and free from bias?

The West has risen to world dominance in the last 500 years.

Are their accounts of what transpired in the past, and throughout their rise to prominence, truthful?

They hide the Moorish origins of their Western civilisation.

The English numerals and alphabet they modified to make their Arabic origins seem less obvious.

White civilisations are all relatively new, just as the existence of non-black people on mother earth.

Blacks lived on the continent, known as Africa or Eden, from the beginning of mankind’s creation and spread to other habitable parts of the world.

The ancestors of all humans were black.

In Europe, for instance, the Bushmen, Khoi Khoi and San ethnic groups once lived there and left paintings and figurines of their likeness thousands of years prior to the existence of caucasians.

The stone hinges in the United Kingdom have been found to predate the existence of whites and are thus associated with these black pioneers of long ago.

In Asia, be it India, Nepal, south-east Asia and as far east as China and Japan.

The first inhabitants of those lands were blacks.

The first three recorded dynasties that lived and ruled in China were black, namely the Xia, Shang and the Zhou.

These predated the Han and their statues and paintings portray them as black people.

Even after the emergence of the Mongol race, largely owing to climatic adaptation, blacks would sail east and continue to make great contributions.

For example, the African genies called n’anga crossed to India aboard ships and were known as nagas.

From there, they spread into the rest of Asia and from their people came the Buddhas.

Yes Gautama, Bodhi dharma, Nagarjuna and so on were all black people from the Naga lineage which still has many descendants living in Myanmar (Burma) and Nepal.

Their images in the form of sculptures and paintings speak for themselves. They were as black as the African, partook of cannabis (ganja) and sat with their legs interlocked (kupfunya chisero).

All these traits are of the ancient n’anga (genie) of Africa.

In the Americas, the first inhabitants were black.

It is believed by some that when the South American continent drifted away from the African continent, there were already some Africans set up in the Americas.

Others believe West Africans sailed to the Americas via the canary currents of the Atlantic Ocean.

The earliest artefacts, such as the Olmec heads, are colossal sculptures undoubtedly depicting blacks.

The most advanced of the civilisations in ancient America, namely the Mayans, were entirely black; so were many of the indigenous Americans killed and dispersed by the Conquistadors.

They built temples and painted pictures of themselves.

In places like Mexico, there are ancient black murals like Bonampak which hints to a society with nothing but blacks as both the lords and the serfs of the land.

We find paintings of tall, big, dark brown skin, dreadlocked people with thick lips and broad noses on the walls of the Bonampak monument.

Other tribes like the Yamasee, Washitaw and so on were indistinguishable from the Mayans and this has hinted to the overwhelming presence of blacks in ancient America, before the Mongol race now known as Red Indians crossed the Bering Straits from the Far East into North America.

They were fewer and not as sophisticated as the indigenous blacks who were the lords of the land as were the blacks of Africa before the coming of foreign groups.

Blacks are the original man. The proto and the archetype of the human race.

As a result, we find evidence of black civilisations all over the habitable world, besides Africa, that predate the non-black races that live there now.

But this is not what we learn in school.

Regardless of the books, sculptures and paintings from the past which betray and confirm world civilisation as the black man’s heritage, blacks have a lack of self knowledge and thus an unwarranted inferiority complex.

Add to that, we have been lied to or had many of our achievements omitted by some of our own children who now differ physically from blacks, and are thus ashamed of their roots in Africans.

The reason for this mis-information of our people is that we allow other people to define our history and therefore our fate.

We have not tried to look back and correct falsehoods that are misconstrued as truth and have been debunked by science and archeology.

These include the portrayal of ancient groups like the Egyptians and Hebrews as anything but black.

We still allow the same books that led us astray to mis-educate our children.

There is a vital process to self determination and sovereignty that we, as blacks, are not taking.

African languages need to be updated, upgraded and modernised.

The culture needs to be conserved, traditions followed and history recorded, remembered and taught to future generations.

We must know our heritage, canonise our own saints and declare our own heroes.

This process begins with researching so as to find out what it is our ancestors left behind.

As for language, how effective is teaching black history and heritage in the language of the former enslaver and slave master.

Languages like Shona are well developed but do not satisfactorily appeal to the modern setting.

This was the case with Greek before it came to world dominance.

They had to learn of new things and took time and effort to translate them into their own language.

The same applies to nations like England and Italy whose renaissance was based on Moorish knowledge.

Words like sugar, coffee, algebra, algorithm, satan and so on are not originally English, but Arabic.

But because they were inexistent in the English dictionary, they were anglicised.

Now we can learn mathematics, science and so on in a barbarian language that used to be, void of any type of sophistication.

Some say, what is the point of trying to rectify this problem.

Rather, we should make-do with whatever world dominant language there is instead of wasting time searching for past formulae to solve current problems.

If a tree has an ailment on a single branch, the rest of it may be preserved.

However, if a tree has an ailment at the root, the whole organism may perish along with it.

The longer we procrastinate, the longer it will also take for this goal to be achieved.

The day Africans will begin using their own African languages as a medium for learning complex subjects like astrology will undoubtedly be the time for the long awaited black renaissance.

Foreign concepts thus seem indigenous to the learner because the information resonates with his/her identity and culture through learning it in one’s own tongue.

Until we accomplish this, only a handful of fortunate Africans who can thoroughly grasp Western languages and are exposed to higher education in the West can truly benefit from contemporary education.

Otherwise, the rest of the black race will remain a step behind, regardless of how intelligent they are, owing to learning things in a language they only partially understand.