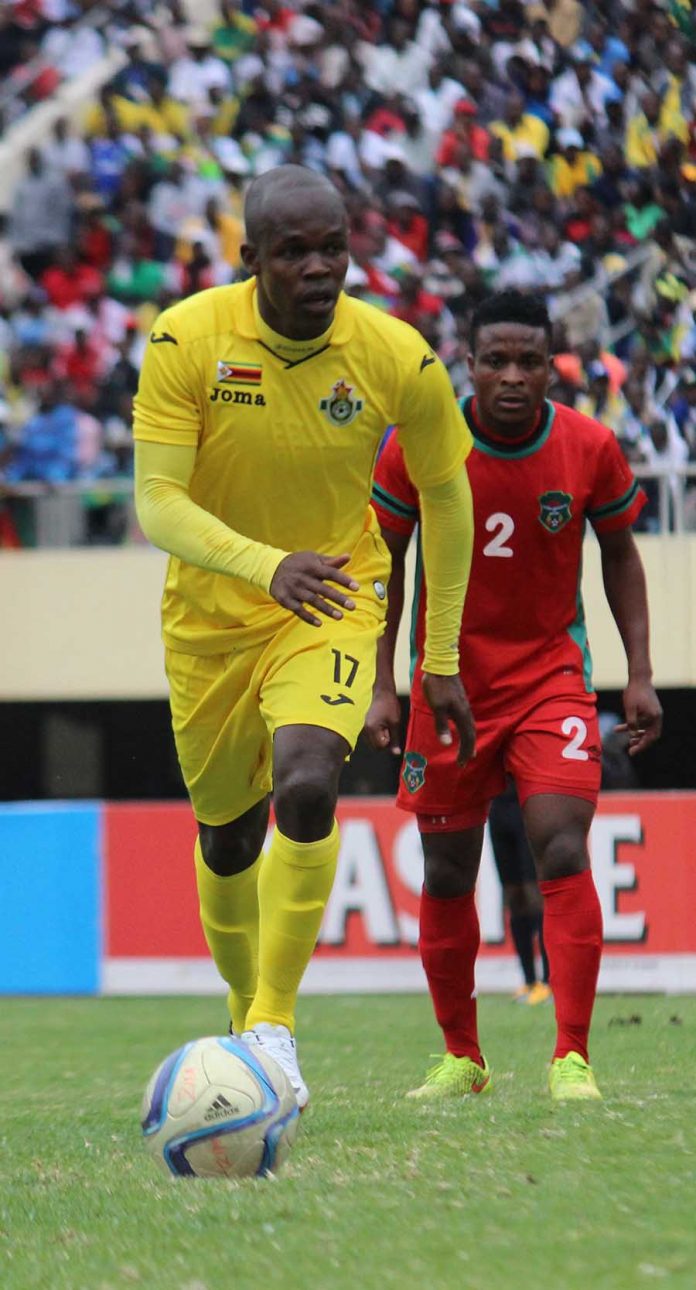 THE Zimbabwe senior men’s national soccer team, the Warriors, will be looking to maintain their stranglehold at the top of Group G when they travel to Congo-Brazzaville on September 6 for the 2019 AFCON qualifiers.
They opened their account with a 3-nil dismantling of Liberia.
The group also includes the DRC, who are second on the standings by goal difference after their 3-1 win over Congo-Brazzaville in their opening fixture of the campaign.
Two teams from the group qualify for the finals to be hosted by Cameroon next year.
But, there are serious questions over coach Sunday Chidzambwa’s team selection.
Chidzambwa named a 28-man provisional squad on Wednesday last week.
He believes the soldiers he has called up will fight to the last breath against Congo-Brazzaville.
The recall of on-fire Chinese-based striker Nyasha Mushekwi, who recently scored a brace for Dalian Yifang to take his tally to five goals in two matches, has been widely welcomed by the football fraternity.
But it is the inclusion of Chapungu keeper Talbert Shumba, whose side has conceded 28 times in 22 matches, as well as Byron Madzokere of Yadah Stars and Richard Hachiro of Herentals which has generated debate.
These players have been woefully out of form and this begs the question: What triggered Chidzambwa’s decision to include them in his team?
The national team is not about pleasing certain individuals as Chidzambwa was quoted as saying by a local weekly.
It is about national pride — itself a sacred value for any country.
Any coach or person entrusted with serving the nation must put the country’s interests first and that applies to Chidzamba.
His questionable attitude to criticism makes him the ambassador we do not want.
The omission of such players as Knox Mutizwa, Ronald Pfumbidzai and in form reigning Soccer-Star-of-the-Year Rodwell Chinyengetere raised a lot of dust.
This is when one puts into consideration that he selected injured players like Marvellous Nakamba and Ovidy Karuru and the duo has been, as widely expected, ruled out of The Warriors’ trip to Congo.
Belgian-based Nakamba aggravated an injury he picked up in May.
The injury saw him sitting out his club’s last match and missing the COSAFA Cup tournament for Zimbabwe in June.
How he gets selected baffles the mind!
Karuru is yet to fully recover from an ankle injury he sustained at the COSAFA Cup tournament in South Africa.
It was a nasty tackle in the Warriors’ quarter-final clash against Namibia, which forced out of the team’s semi-final and final matches in which Zimbabwe went on to win.
There is very little progress in acquiring Zimbabwean passports for British-born Zimbabweans Tendai Darikwa (Nottingham Forest), Adam Chicksen (Bradford City) and Kelly Lunga (SC Bonner), who were all named in the provisional squad for the match against Congo-Brazzaville.
These are part of the 28-member provisional squad that was announced by coach Sunday ‘Mhofu’ Chidzambwa.
Their absence is a big blow to the Warriors’ hopes of making a quick return to the continental jamboree, having participated in the last edition.
Chidzambwa was also forced to exclude one of the team’s stars, Tino Kadewere, who recently moved to France due to injury.
Having some of the players in fine form increases the level of competition for the first 11.
With the likes of skipper Knowledge Musona, Khama Billiat and the returning Mushekwi available, the squad still looks formidable and capable of getting a result in the Republic of Congo.
The Warriors talisman is getting game time and starting at his new club though.
The 28-year-old Musona played 77 minutes as Anderlecht beat Royal Excel Mouscron 2-0 in a row since the start of the 2018-9 Belgian First Division League.
Musona joined the 34-time league title winners Anderlecht in May following an impressive three-year spell with fellow Belgian side KV Oostende where he scored 41 goals plus 18 assists.
The Zimbabwean star is yet to establish himself firmly at Belgium’s most successful team.
The diminutive Baroka FC winger, Talent Chawapiwa, is rocking South Africa ABSA Premiership at the moment.
The 26-year-old played every minute of Baroka FC’s three matches since the start of the season and was described by his coach Wedson Nyirenda as a ‘big bomb’.
Khama Billiat is also showing flashes of brilliance at Kaizer Chiefs (Amakhosi) and has bee described as the best player in South Africa by coach Giovanni Solinas.
After the Congo-Brazzaville assignment, Zimbabwe will play back-to-back fixtures against DR Congo between October 10 and 13.
Warriors Squad
George Chigova (Polokwane), Donovan Benard (Ngezi Paltinum Stars), Edmore Sibanda (Witbank), Talbert Shumba (Chapungu), Divine Lunga (Golden Arrows), Tendayi Darikwa (Nottingham Forest), Alec Mudimu (Cefn druids AFC), Costa Nhamoinesu (Sparta Praque), Teenage Hadebe (Kaizer Chiefs), Kelvin Moyo (FC Platinum), Eric Chipeta (Cape Umoya United), Adam Chicksen (Bradford City), Byron Madzokerere (Yadah FC), MarshalL Munetsi (Orlando Pirates), Tafadzwa Kutinyu (Azam), Ovidy Karuru (Amazulu), Marvelous Nakamba (Club Brudge), Richard Hachiro (Herentals), Talent Chawapiwa (Baroka), Kudakwashe Mahachi (Orlando Pirates), Leeroy Mavunga (Yadah FC), Khama Billiat (Kaizer Chiefs), Knowledge Musona (Anderlecht), Evans Rusike (Supersport), Kelly Lunga (SC Bonner), Terrence Dzvukamanja (Bidvest Wits), Nyasha Mushekwi (Dailan Yifang), Tinotenda Chibharo (FK Sloboda Uzice).