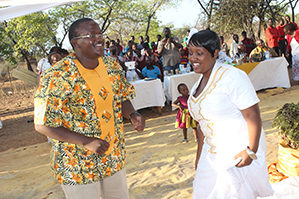 ANYONE who says in African culture there is no freedom to choose whoever one wants to marry is just mouthing colonial ignorance about African marriages.
African culture does not deny anyone freedom to marry whoever they want. Rather, it has come up with factors to help, especially the girl-child, identify a serious suitor, so that her choice is based on reason rather than on emotion.
This is quite evident in the following stories.
The Fire on the Hill
Once, there was a lake of cold water.
Many animals came at night to the lake to drink some water, but people never came to the lake at night.
The animals could kill and eat them.
Now, a rich man who had a beautiful daughter said, “The young man, who will go to the lake in the evening and stay in the cold water till morning, will have my daughter for his wife.”
A poor young man who loved the rich man’s daughter very much said to his mother, “I shall try to stay all night in the lake and then marry my dear girl.”
“No, no,” the mother said.
“You are my only son!
“The water in the lake is very cold, and the animals will eat you up.
“Don’t go there!”
She cried, but her son said, “Mother, don’t cry.
“I must try.
“I love her so much!”
So the young man went to the girl’s father and told him that he wanted to go to the lake and stay in the cold water all night.
The rich man sent his servants to a place where they could watch the young man.
When night came, the young man went to the lake and his mother followed him, but he did not see her.
There was a hill 40 paces away from the place where the young man went into the water.
The woman climbed up the hill and made a fire.
The wild animals saw the fire and were afraid to go near.
The young man saw the fire, too, and understood that his mother was there.
He thought of his mother’s love, and it was easier for him to stay all night in the cold water.
Morning came.
The young man went to the rich man’s house.
The rich man saw him and said, “My servants say that there was a fire on a hill 40 paces from the lake.
“It warmed you.
“That is why you could stay all night in the water.
“So you cannot marry my daughter. Goodbye.”
The young man was angry and went to the judge.
“Well,” the judge said.
“This is a simple case.”
The next morning the young man with his mother and the rich man with his servants came before the judge.
There were many people there who wanted to hear the case.
The judge asked for a pot of water.
Then he walked 40 paces from the pot and made a fire.
“Now,” he said.
“We shall wait a little until the water is warm.”
The people cried, “But the fire is so far away.
“It cannot warm the water in the pot.”
Then the judge said, “And how could that young man warm himself at a fire 40 paces away?”
So the case was over, and the young man married the rich man’s daughter, and both were happy.
Which is best?
A man had three sons who loved the same girl.
Each of them asked the girl, “Will you marry me?”
All of them were clever, handsome and strong.
The girl liked each of them very much and could not decide which one was the best.
One day the boys’ father said, “Here is some money for you.
“You will go on a long travel.
“While you are travelling, you must look for a very useful thing and buy it and bring it home.”
The three brothers travelled for a long time, and they bought three very useful things.
The first bought a magic carpet.
On it he could fly to any place in no time.
The second bought a magic looking-glass.
He could see anyone and everything that he wanted to see in it.
The third bought a magic lemon.
The juice could make a dying man or woman well again.
The three brothers came together and showed their things to one another.
Then one of them said, “We are far from our home and from our dear girl.
“Let us look into the looking-glass and see her.”
And they all looked into the looking-glass and saw that the girl was very ill.
Then the first brother asked his brothers to sit down on his carpet and they were at the girl’s house in no time.
The third brother cut his lemon and gave the juice to the girl and she was well again.
The young men were very happy.
“Now, which of us will you marry?” they asked.
“I thank you all, my dear friends,” answered the girl.
“One of you saw me in his looking-glass, and that helped save my life.
“His looking-glass is a very useful thing, and he will have it forever.
“The second brought three of you here on his carpet, and that helped save me, too. “It is also a very useful thing, and he will have it forever.
“The third gave me the lemon juice, and now I am well again.
“But he has no lemon now.
“He gave all he had to save me.
“I will be his wife.”
The other two agreed and said, “Yes, she is right.”
Now, can anyone point out anything in these stories that denies anyone freedom to choose whoever they want to marry?