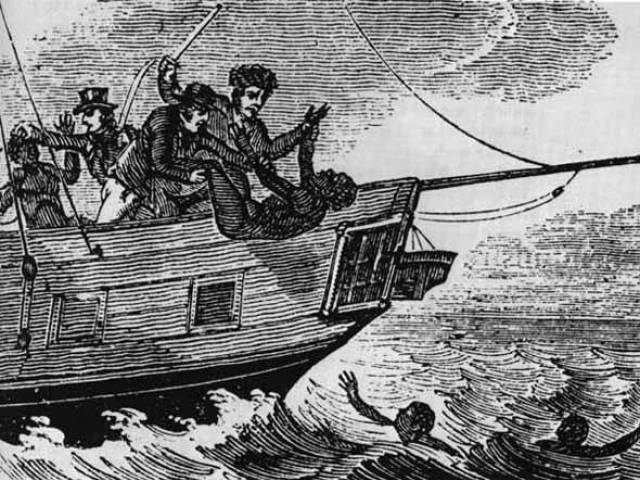 THE Transatlantic slave trade involved the kidnapping of black men, women, and children of varying age and ethnic groups from sub-Saharan Africa and their shipment across the Atlantic Ocean to Europe and/or the Americas.

Some of the worst cases of human rights abuse in history were experienced by these black captives.

They were stalked, captured, put under bondage, walked to the coast with yokes on their necks and stuffed in dungeons.

After passing the ‘point of no return’, they endured a long sea voyage that took three-to-five months while chained by the wrists and ankles below decks.

They would urinate and defecate on themselves and others.

The smell was foul as they were only occasionally splashed with sea water which irritated the wounds they acquired from being chained to wood and metal for extended periods of time.

Illnesses were common and many would die before reaching their destination.

Women, both young and old, were routinely raped by the captain and/or his crew and would arrive pregnant with children of forced miscegenation.

Many slaves would opt to jump overboard and take their own lives rather than experience another day of the unsanitary, painful and degrading reality they were suffering.

Others were willing to fight for their freedom.

This led the crew to keep slaves chained together for the whole duration of the journey.

The ones who showed resistance were either stripped, whipped,  thumbed, maimed or killed, depending on the crime the slave was charged with.

Refusal to walk would lead to a slave being stripped completely nude.

The humiliation of a single victim would discourage the rest from co-operating.

Trying to fight led to whipping.

Thumbing was a punishment involving a slave’s thumb being put in-between a wooden clamp and squeezed tight.

This was often used on women who refused to be raped.

They could not bear the pain and would give in without experiencing messier forms of punishment like whipping, which left the slave wretched with scars and soaked in blood.

A slave who injured or killed a crew member while attempting to flee was made an example of rather than killed.

One such slave could endure all the forms of punishment mentioned above before being eventually maimed by having one or more of his or her limbs dismembered.

Merely killing the rebellious slaves would encourage more resistance as death was considered a better option to staying on a ship whose fate and destination the captives knew not.

These forms of punishment were enforced on the bellicose slaves even before they boarded the ships as a deterrent to potential revolt.

Some women were pregnant at capture and would give birth on board.

The ships were hot and humid during the day and would be cold on winter nights.

Urine would flow below deck with feces, blood, and vomit therein.

It was a sty or barn for humans and the only times they left the lower deck was when they were briefly taken up for exercise and cleaning.

Many of them would suffer from dehydration and would often arrive in poor health.

A large proportion of them would die from illnesses like flux and fever.

Their bodies would be thrown overboard and left to be devoured by sea creatures.

To make up for the anticipated loss of life among slaves, the captain would often opt to carry more slaves than the shipment provided for.

If the slave traders wanted 100 slaves, they would pack an extra 50.

If fortunate, 100 would arrive alive.

Upon arrival, they would be delivered to the slave traders who would pay the captain and crew for the human cargo that survived.

The slave trader would place the black captives in an enclosed area wherein some workers, mostly slaves, would spray them with water and use grease to cover their bruises. This was done to make the captives look presentable and healthy at the slave market.

The rejects, owing to poor health, were either sold at a giveaway price or retained by the slave trader.

He would nurse them to health and then ready them for sale on the market on a later date.

The captives were lined up and sold while chained.

Like dogs, they were walked on leash and paraded on stage for the audience to observe and make their bids.

Like cattle breeds, the stronger the captive, the more expensive he/she would be.

Potential buyers would be allowed to further examine the blacks before finally deciding whether or not to buy them.

This humiliating process involved feeling the muscles, opening the mouth to check the teeth and in the case of women, fondling.

Upon being purchased, they would be reduced to being the slave master’s property and so were their spouses and offspring.

This type of slavery is called ‘chattel slavery’ and is in no way the same as paid servitude.

Does a man pay his cow for ploughing the or his horse for pulling his cart?

Why then should they reward their slaves for labouring for their masters?

That was the logic behind this exploitative trade.

The next step was ‘breaking the slave’, which was similar to taming a wild horse – a painful process under which a slave was expected to abandon his/her past identity, whether as a prince, priest or warrior and replace it with that of a slave.

His/her vernacular language, names, cultural beliefs and God would be outlawed and in their stead, he/she would be given the slave master’s language, religion and a Christian name.

All values about family and morality were removed from the slave who would be subjected to all types of inhumane treatment.

To ascertain his authority, the slave master or his staff would routinely rape the attractive women.

Slaves would also be branded by scorching steel in the manner of cattle.

Insubordinate men were whipped in front of other slaves by other slaves at the instruction of the slave master.

This was done so the slave would subconsciously hate his own kind while surrendering his/her soul to the slave master who would have delegated the dirty work.

The broken slave would then be assessed to see if his/her loyalty and love for the slave master was strong.

If so, such a slave would be promoted to work in the residence of the slave master.

The rest, who would be strong but visibly working only because they have no choice, would be left to work in the fields.

Thus, there were ‘house niggers’ and ‘field niggers’.

The most rebellious among the slaves were typically found among the field niggers.

When the owner ate swine, he would consume the flesh and the rest, namely the nose, trotters, guts, and head were given to the slaves.

But more often than not, the house niggers would taste the slave master’s food while cooking, serving it or finishing off the leftovers.

Women were likewise separated, with the most attractive working in the big house.

Thus, there was understandable tension between these two types of slaves, with the house nigger dressing, eating and talking better than the field niggers who faced the full extent of slavery.