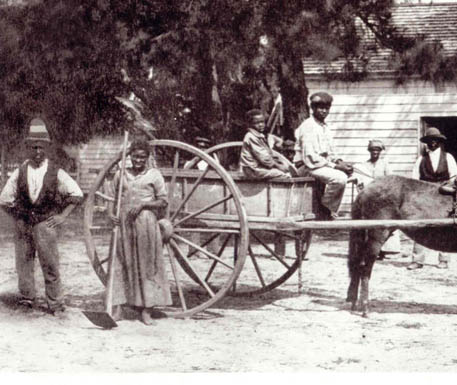 BLACK people faced centuries of enslavement in Europe and the Americas.

This led to the growth of Western nations and the development of their industries and economic sectors.

Before there were machines, it took men and beasts to undertake vital activities like farming, processing and construction.

The agricultural revolution occurred after black slaves innovated tools and means to lessen their burden.

Necessity is the mother of invention, and anything that was made or improved on by a slave was patented under the name of his or her master.

Ironing boards, musical instruments, wooden cutlery and so on were made or improved on by the blacks to make their tasks easier.

After years of tool modifications by slaves and also blacksmiths, who were for the most part black slaves, America had amassed a substantial amount of tools that were marketed as necessary aids to make farming more efficient.

These tools would be shared with nations like England and Germany.

When nations produce sufficient food, the people cease to squabble over miniscule things.

They increase their activities because they will have sufficient energy to do so. This leads to greater focus in education as less time would be spent hunting for food.

It was this stability that slaves gave Western nations allowing them to venture into fields like banking, insurance and mechanisation.

Banking became necessary only after the slave masters made exceedingly great profits from the free labour of blacks on their plantations.

They made so much money with no expenses on salaries or accommodation.

The slaves built and made clothes for themselves, besides their masters.

Their food was the refuse of beasts such as pig heads, trotters, organs, guts and so on.

So, one can imagine how great a profit these slave masters’ made for generations because they owned self-sustaining black slaves.

The money would then be too much to store at home because it risked being stolen or damaged by water, fire, pests and so on.

This led to the development of companies that specialised in pooling together people’s money for the purpose of storage and safety.

This money was often invested in lucrative businesses such as loaning and shipping.

The same applied to insurance, which would never have existed had it not been for the large amounts of money that slave owners made from free black labour.

Mechanisation is an imitation of human activity.

A crusher mimics the crushing motion a human makes with a tool.

With human strength replaced by electrical power, the tool can now work without the problem of exhaustion as long as its fuel, lubrication and so on is sufficient.

This brings us back to the contribution of slaves in uncovering the processes and improvising the tools that were later mechanised after intellectual growth had been achieved as a result of centuries of black slave-induced food security.

Mechanisation was the reason America, particularly the industrial north, began seeing slavery as an unnecessary institution to economic development.

This was similar to how carts, wagons and carriages were pulled by horses, donkeys and mules. So much so that to this day, the strength of the motors that replaced the beasts is still called horse power.

Now that there are automobiles, horses and carts are obsolete.

The blacks of the Americas were thus the backbone of the American nation in that they were the labour force that inspired the machine era.

Yet even machines cannot independently and automatically prepare land, plant on it, water it, harvest its produce and process it the way black slaves were systematically programed to do for their white masters throughout their captive lives.

If the slave was talented in playing instruments, singing, dancing or fighting, it was the slave master who exploited that talent and made profits from it.

If a female slave were beautiful, she would be prostituted or used by the slave master himself as a wench.

Their mixed race daughters would be treated the same way.

This shows how dehumanised blacks were, though they were renowned and exploited for their strength, talents, wits and beauty by the same whites who thought little of them.

They were chattel slaves who were equivalent to property and livestock.

This must not be imagined as a process that took place overnight, but it was a systematic taming of the African kidnapped from Africa.

His name and identity had to be replaced with a Western name, language and slave status. His beliefs and allegiances would also be lost with time, and all that would be left was a black person with no cause, but to serve the man who claimed to be his master.

Thus many slaves were not bitter towards whites, but sought to impress them because they had no other way of surviving.

The first generation of blacks were the most problematic because they knew another world, language, God, culture and had other positions in society. Thus, they knew what they were losing in being reduced to slaves.

But their descendants were, for the most part, resigned to their situation because they were born into slavery.

This is not to say they did not aspire for freedom, for it was every black slave’s dream to be free. But even when freedom came after Abraham Lincoln’s emancipation proclamation in the 1860s, some blacks decided to remain on the plantations with their former slave masters to work as partners.

This was because they had nowhere else to go and thus no sure means to make a living.

Those more organised and had made savings because of their talents acquired land and did remarkably well because they used their numbers and labour to run their farms.

As for the whites who lost ownership of their slaves owing to the reforms of the north, after defeating the southern confederacy in a brutal civil war, many of them began to struggle and lost the capacity to continue running large scale farms as they had done in the past.

Some were wealthy enough to buy machines from the north but many of them began selling some of their land, even to blacks, in order to make a living.

The blacks who saw these struggling whites often assisted them by partnering with them by providing labour and expertise while the whites made available their land and the profits would be split accordingly.

To whites who had given up and were languishing in poverty, the blacks voluntarily gave them part of their produce for free.

This shows that former black slaves had no ill will against whites, even after all the oppression they had suffered.

Yet whites continue to yearn for a return to slave trading, with no talk of granting blacks repatriation, remuneration and reparations for their hand in their kidnapping from Africa and enslavement in the Americas.

The Ku Klux Klan (KKK), for example, began when southern whites wanted to discourage the freeing of blacks just before slavery was abolished.

The movement resurfaced in 1915 in Oklahoma and led to the demise of Black Wall Street, the most prominent black run settlement to ever thrive in the US.

To this day, the KKK remains functional along with other anti black movements like the American Nazis (not German).

This shows that blacks are incapable of committing what whites call ‘reverse racism’.

We are the hated and oppressed, yet we do not hate our oppressors. Whites are the offenders, yet they will not apologise, repent nor make amends.