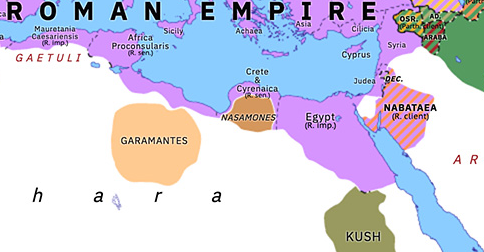 BEING Africans and closely affiliated with pastoral groups further east, Libyans were a people whose customs and religion were almost entirely African at the time of the first encounter with Roman colonists. They scarred and painted their faces like other Africans.

They wore their hair in totemic styles and braids.

They did not eat flesh of cows, as is the custom of many of the more traditional Cushitic peoples today.

The Adyrmachidae were directly West of the Egyptian Delta in Herodotus’ day although they are described a few centuries later as a people along the Nile in Northern Nubia, the Nasamones were in Syrtis Major (see map) across the southern slope of Cyrenaica in modem Libya.

The Nasamones controlled the Augila oasis in Libya, the Macae were directly West of the Nasamones, Machlyes were in the Lesser Syrtis on the Libyan coast, the Lotophagii were in the west of Libya and the Gamphasantes were considered a section of the Garamantes who were more or less agriculturalists and pastoralists in the Fezzan area.

The Ammonians were a sedentary people in the Siwa oasis in Libya and partly Egyptian.

According to Strabo of the 1st Century, the Marmaridae lay along the shore next to Egypt extending west to Cyrenaica and south to Ammoniam (Siwah).

The Hesperidae lived in the fertile part of Cyrenaica.

According to Philistus, the Erebidae and Gindanes were part of the Lotophagii. The Levathes Maures were in Leptis Magna at the time of the Emperor Justinian of the 4th Century.

A people called Gaitules were said by Eustathius to be the greatest or largest of the Libyan tribes.

According to Strabo, they were the most numerous.

They extended along the south Atlas slopes eastward to the Syrtis Major.

It is possible that they were also the Atlantaeans of earlier writers.

Pliny and Tacitus mention tribes like the Mussulini or Massyli, and the Masaesyli who were possibly the Macae Libyans mentioned by Herodotus.

Ptolemy mentions the Seli, a tribe next to the Nasamones.

Bates thought that the root Sel was an ethnic term preserved in the names like Psylli, Massyli and Masaesyles. (Zel, Jel or Kel is a modem Berber root meaning clan).

Procopius implies that these Masaesyles, and Massyli who lived in the ancient kingdom of Numidia were Moors and Gaitules trained by a leader named Massinissa to be soldiers.

The Luwata were a prominent tribe mentioned in Arab writings.

Corippus of the 6th Century AD who speaks of the Lagwathes says that among them were a pitiless tribe called Ausuriani otherwise called Astures or Astacures. They also lived in Ethiopia.

The Luwata had several sub-tribes, including Mazikes. Procopius says that they were a tribe of the Maurusioi who occupied the area of Tripoli and Tunis while other Maures lived in Byzacium and Numidia.

The Moors were said by Procopius to have colonised parts of the Iberian peninsula over a thousand years before.

The Libyan races shared various customs some of which were admirable while others inspired less appreciation.

They were, like the men and women of Arabia, accustomed to raiding and pillage especially from the desert fringes.

The historian Diodorus in the 1st Century BC spoke of the Gaitules as a people who made robbery their constant practice, attacking unexpectedly from the desert.

Nonnus calls the Maures a people of the desert ‘stung with mad lust of robber welfare.”

Tacitus describes the Garamantes as an ungovernable tribe ‘always engaged in practicing brigandage on their neighbours.’

Another custom shared by the Libyans was the penchant for dwelling in caverns and grottos. Pausanius said that the Libyans lived in huts and in natural caverns and in man-made grottoes.

Such people were found among the Gaitules and Pharusii. Strabo said that certain of the Pharusii, then in southern Morocco lived in grottoes that they built. Such people in ‘Arabia’ and ‘Ethiopia’ east of the Nile were named Trogodytes. Herodotus mentions that the Ethiopian Trogodytes also lived in the Fezzan area of Libya.

The Mauri Mazazeces or Mezikes in the area of Tripoli and Tunis were called ‘Ethiopians’ in an ancient roman document entitled the Exposition Totius Mundi. It is these Maures who composed the African or Ethiopian luxury slaves as Rome, where they were called Amazegzeg and Amazik.

The lifestyle of the Libyans and their appearance apparently differed little from those nomadic peoples east of the Nile.

He said that they dressed like their neighbours, the Masaesyli of Numidia, and like most of the Libyan tribes in general.

Later the Moors are described by Procopius as a people ‘who lived in huts and wear a thick cloak and a rough shirt at all times. They also had camels, shields, javelins and swords.’

The men wore earrings in one ear. They dwelt in Byzacium, Tripolitania and Numidia and their women uttered oracles in trance-like states and foretold the future.

Mauri Gensani or Quinquegentiani are mentioned as nomadic tribes between Barka in Libya and the Shotts region of Algeria.

The later name for the Maures of Barka are Luata (Levathes or Ilagwathes). Corripus mentions them in the 6th Century as carrying a long sword with a short sword attached to the arm.

It is the custom of modern Beja and other Cushitic and Nilo-saharan speaking tribes of the Eastern Sudan to carry these arm or wrist daggers and at times long swords.

The Maures are also known to have been ruled by female chiefs, holy women or queens even in the time of the Islamisation of North Africa.

Procopius mentions that they often rode in chariots into battle with the men, helping them with their arms of iron.

The original Amazons were said to have been Libyan women and the war Goddess Athena was supposedly from Libya. Diodorus Siculus wrote about the Amazons in the area of Hespera ‘it was the custom for women to practice the arts of war and to serve in the army for a fixed time…and if it happened that a girl was born, its breasts were seared that they might not develop at the time of maturity; for they thought that the breasts, as they stood out from the body, were no small hindrance in warfare.’

Of the young girls it was said the elders seared off one of the breasts with a hot iron while they were young, in order not to impede drawing the arrow. They rode on camels and were great archers.

Herodotus had spoken of a custom of the women of the Libyans called Auseans who had a kind of ritual fight with stones and clubs in honour of Athena or Minerva.

The girdle of Athena, according to him, was taken from the goat skin or aegis worn by the Libyan women.

This is worn by Ethiopian women to this day.